Did David Ayers Just Tell Us The Villain For Gotham City Sirens Film? 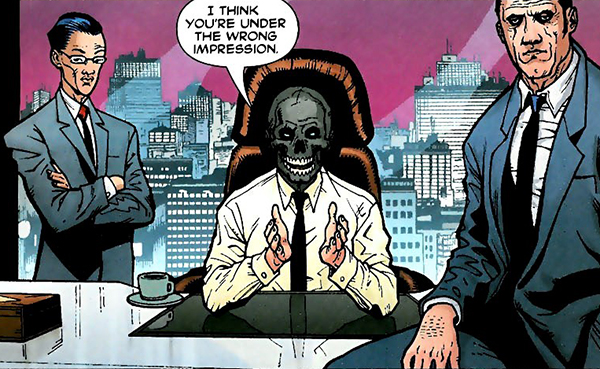 While in the very early stages of development, the Gotham City Sirens film doesn’t have much news. However, an image posted on director David Ayer‘s Twitter may have just told us who the villain is of that film. Is it wishful thinking or is Ayer giving us a wink?

What we know of the film thus far is that David Ayer is directing the film. Margot Robbie is starring and an executive producer with Geneva Robertson-Dworet writing the script. So we have bare bones information about the film. However, Ayer just posted an image of none other than Black Mask on his Twitter and we can’t help but think he’s just announced the villain. Last time he confirmed the rumor of him directing the Gotham City Sirens film by posting a picture of the three girls. He has to be telling us it’s him, right?

So who’s Black Mask? Roman Sionis aka Black Mask is a villain created in 1985 by Doug Moench and Tom Mandrake. He’s a crime lord and underground kingpin of Gotham City, making him a target for Batman. Sionis was born of socialite parents, like Bruce Wayne. However, his family disliked other socialites like Thomas and Martha Wayne but continued to associate with them. Like they were wearing “masks” around them. This deeply affected Sionis who took on a masked persona himself when he turned to crime.

While mostly a Bat-family villain, he has crossed paths with anti-hero/villain Catwoman in her own comic run. Being a kingpin, Black Mask is determined to do whatever to rise to the top. So trying to thwart Harley Quinn, Poison Ivy and Catwoman could definitely work.  Black Mask has been featured in the Arkham games twice and is currently a crime lord in the DC Rebirth reboot. So he’s not completely unfamiliar!

What do you think of Black Mask joining Gotham City Sirens? Do you think Ayer is giving us a clue or toying with us? Let us know and be sure to come back to Geek Girl Authority for more geek news!