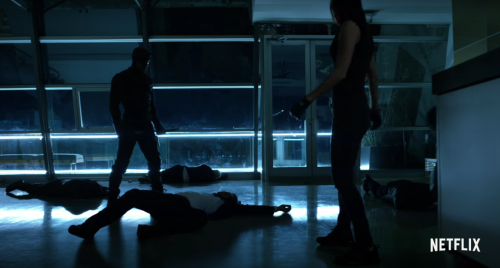 Daredevil dropped their newest trailer today and, not only did it give us a lot of Elektra’s story, but it also gave us her battle with The Hand!

So, whereas Punisher is going up against all the crime lords out of vengeance for the murder of his family, Elektra is going up against the ancient Ninja crime syndicate that calls itself The Hand. As the trailer suggests, they’ve been hibernating, watching as Matt Murdock took out all of their competition for them.

First things first, The Hand is a Ninja Crime Syndicate — think Yakuza, but mystical and ancient. They are an army of skilled assassins and Matt Murdock’s path crosses with them as much as it does Kingpin or Bullseye or any other of his villains. 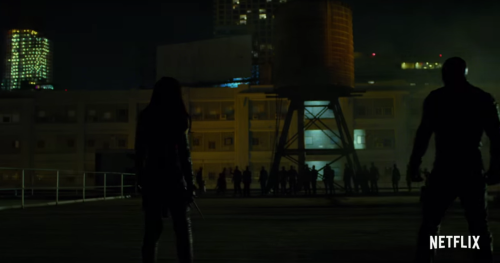 But what exactly is The Hand up to? What have they been hibernating for?

Apparently, the answer comes from a mysterious voice that tells Matt Murdock that “The Rising is coming” and that he “cannot stop what we have started.” 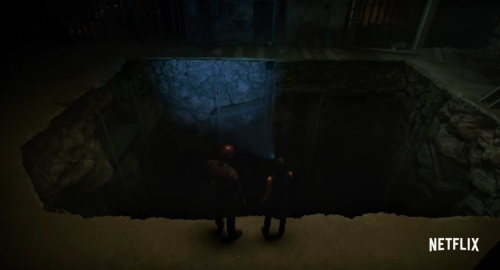 The Hand being an ancient Ninja clan, there is always a lot of mysticism mixed into their story lines. We’ve already had a small hint of that in the last season with Madame Gao, who simply disappears the last time we see her.

We also had a taste of something in the episode where Stick makes an appearance, going after a destructive force that turns out to be a small child. 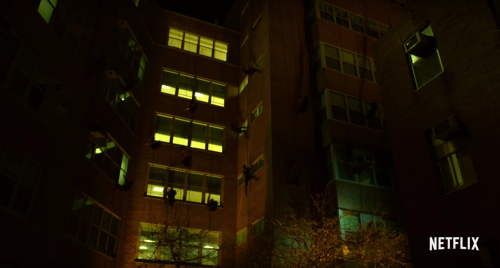 Is it possible that Netflix’s Daredevil is starting to dig into the Shadowland story from the comics?

In that story, Matt Murdock returns from Japan as the leader of The Hand and declares himself the de facto leader over all of Hell’s Kitchen. However, as it turns out, he is actually possessed by The Beast of the Hand, a demonic entity that The Hand resurrected.

It’s unlikely that they’ll follow the story quite that closely, but summoning an ancient Japanese demon into a host sounds like the perfect way to start laying the tracks to bring Iron Fist into the mix.

So who is this Elektra that Murdock should trust her?

Elektra Natchios and Matt Murdock have a long history together, with Elektra being one of Murdock’s main love interests and biggest enemies throughout the books. There always appears to be legitimate love between the two of them, but also a very healthy dose of mistrust, as Elektra’s only true goals are self-preservation and enjoying the finer things of life. Her skills go behind the person who will help her the most and her methods are not very nice. 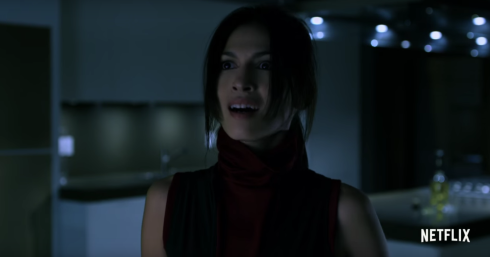 This is why Murdock warns her not to kill anyone — because he knows her track record.

Elodie Yung’s performance as Elektra appears to be exactly right — smarmy, smart, sarcastic and sensual — exactly what we’re looking for in her character. 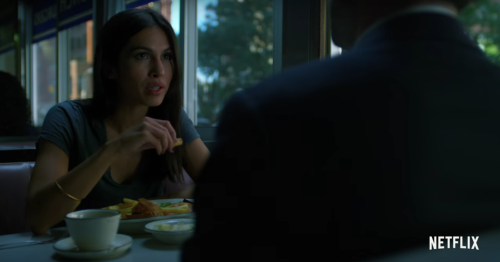 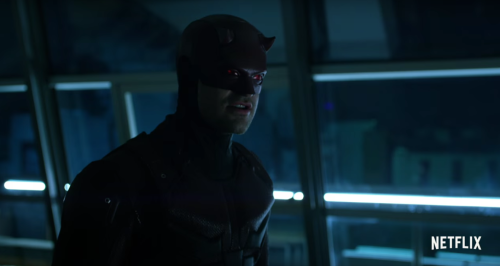 We also have the question of Daredevil’s suit, which seems to be upgraded even past the one we saw in the earlier trailer, which even had stitching going right up the middle of the mask. It appears that he will get a pretty serious upgrade at one point.

Not only that, but in this trailer we finally see the Daredevil from the comics 100% fully realized in another hallway fight scene when he throws his billy club against the wall and it ricochets into one of the thugs he’s beating. 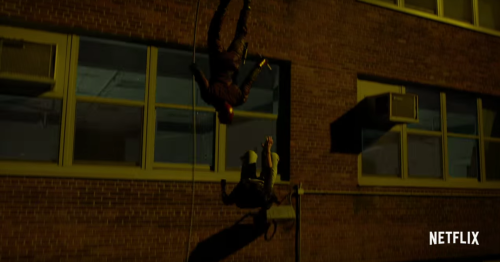 Towards the end of the trailer, we see Daredevil falling after a woman to save her, a line in his other hand, and it looks like he might go swinging. Is this a rope that was already there, like the ones we saw The Hand using to climb the building earlier, or is this out of his billy club like it is in the comics?

FOGGY, KAREN PAGE AND THE PUNISHER????

What happened to Foggy’s arm? What is Karen Page looking at? Could The Punisher be any more bad ass than he is here? 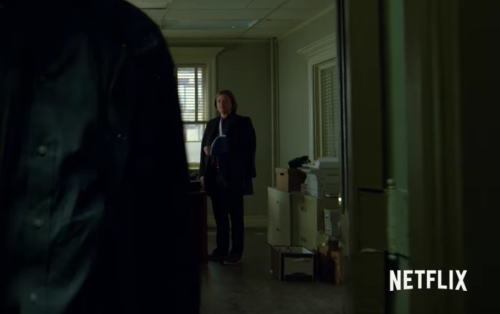 Poor Foggy Nelson, all he wants is for his best friend to be safe and be alive. His greatest concern is always for his BFF to be safe and alive — but with a vengeance-filled vet like The Punisher, a crazy ex-girlfriend assassin like Elektra and an army of mystical ninja assassins after him, the likelihood of his survival is starting to wane.

And then there’s Karen Page, who in the last trailer was starting to really fall for Matt Murdock, but here we see Murdock having relations with Elektra, so that’s probably going to create some not-so-fun fireworks.

What is she looking at in this picture!? 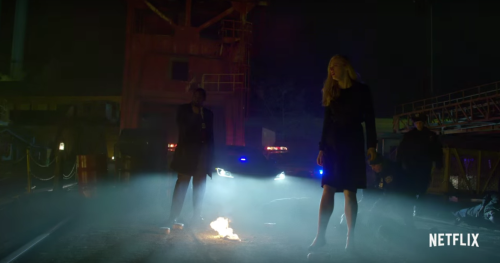 And finally, The Punisher. Jon Bernthal is perfect. The last trailer made it seem like he was the main antagonist, but here we see The Hand as a pretty dire antagonist as well. Our prediction — Daredevil and Punisher come to an understanding and Frank Castle ends up being Daredevil’s secret weapon against The Hand. 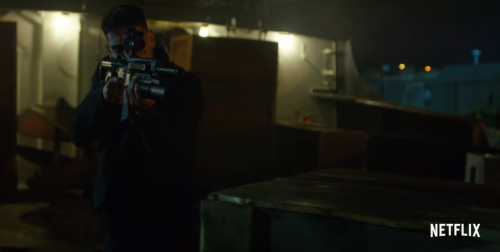 We’ll just have to wait until March 18th for all of these answers.