Daredevil Season Two hits Netflix on March 18th, just ten days away, and Marvel has just released a poster that shows off the new costumes for the three biggest Marvel characters featured in the series — Daredevil, Elektra and The Punisher, played by Charlie Cox, Elodie Yung and Jon Bernthal, respectively.

Not only that, but it’s the best look at their costumes yet! 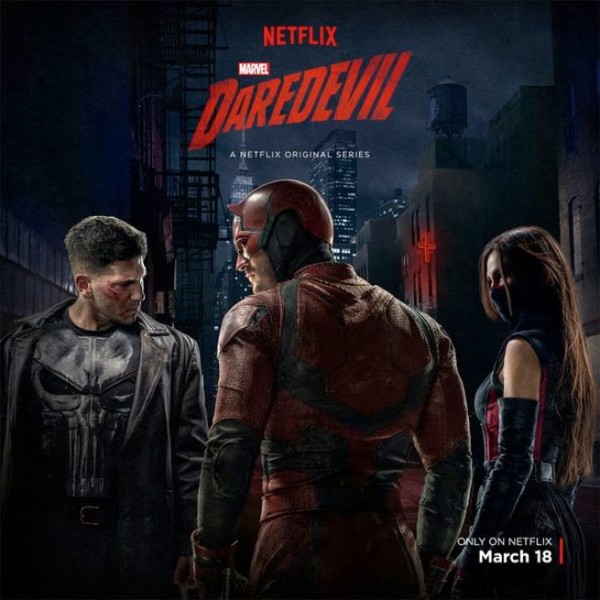 There’s not much to see on Daredevil that we haven’t already seen. There’s more red to his costume than in previous incarnations and he has the horns. Like his previous costumes, there’s a strong tactical feel to his outfit, designed with purpose, not just to conceal his identity. Pretty much the only thing they could possibly add to his costume to make it more comic-y is the DD that he wears on his chest — because the rest is already there.

Elektra’s costume is the biggest deviations from the comics, but that’s mostly because Elektra in the comics is basically just wearing a swim suit. Here, she appears to be wearing an outfit that is equal parts tactical SWAT and loose, flowing ninja robes. Like with Daredevil, she has as much black in her outfit as she does red.

The biggest thing any one will notice is that The Punisher does, indeed, have the white skull on his chest! There was some questioning whether we would see that or not, but here we have proof that, at some point, we will indeed see the Punisher logo!

Perhaps the most important take away from this new poster is just how good everyone looks! We will get to see these characters that we love from the comics really brought to life on our TV’s in a big way! It’s really amazing the world we live in!

Oh, and here’s a bonus picture of some billboards in Toronto that feature the three characters. 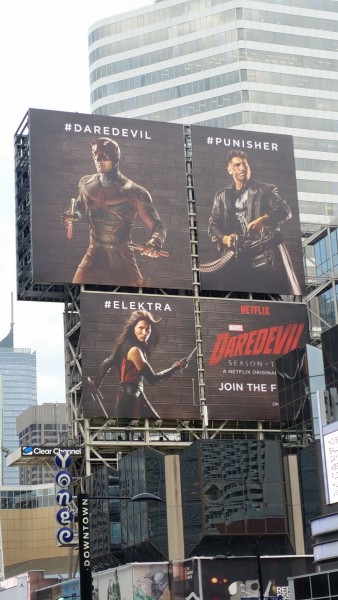 Why is it a bonus? Because The Punisher is holding a minigun.

Now let us pray to the Maker that we get to see that in the series.