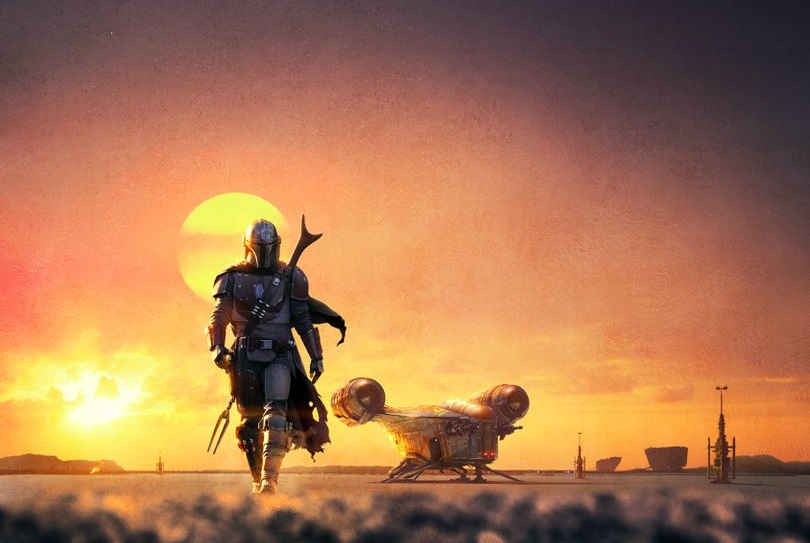 D23 has just kicked off and already the Mouse House is delivering gifts. Just ahead of their Disney+ panel today, they revealed posters for the upcoming films and shows coming to the streaming service. One of those posters was for the highly anticipated Star Wars live action series The Mandalorian.

In the poster we see the unnamed warrior, The Mandalorian, walking away from his ship. He’s on a very, very familiar planet. You can see water vaporators scattered around the desert floor. You can also see a couple Jawa sandcrawlers in the distance. So you know what that means, right? We’re going back to Tatooine! What sort of assignment will The Mando have there?

The Mandalorian will follow the unnamed bounty hunter as he scours the outer reaches of the galaxy for the highest bounties. The show will be set after the fall of the Empire but before the rise of The First Order. It stars Pedro Pascal as The Mandalorian, Gina Carano as Cara Dune, a former Rebel shocktrooper, and Carl Weathers as Greef Carga, the leader of a bounty hunter guild. It also stars Nick Nolte, Giancarlo Esposito, Emily Swallow, Omid Abtahi, Werner Herzog, Taika Waititi, Bill Burr and Mark Boone Junior.

Check out the poster below and let us know what you think! Be sure to come back to Geek Girl Authority for more D23 updates! The Mandalorian debuts on Disney+ on November 12th, 2019.

RELATED: THE MANDALORIAN Panel Invites Us to the Outer Rim