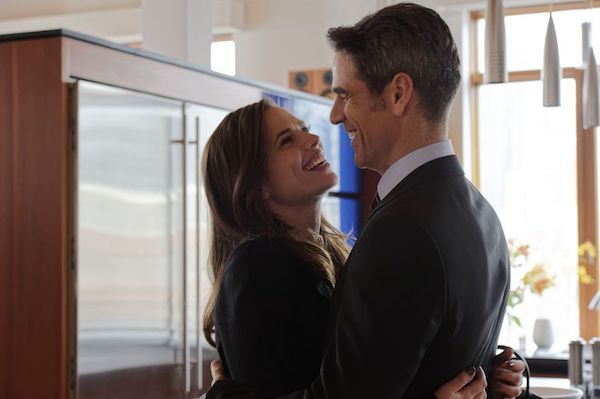 “Black Orchid” opens on a flashback. A woman enters her apartment. Rapid fire shots of a police reports make it clear this is 2006. “The Way You Look Tonight” plays on the radio as a man materializes behind her. She doesn’t realize she’s not alone until he’s right on top of her, beating her savagely. Once she’s dead, the murderer touches up her lipstick before leaving.

Returning to the present day, Hayes Morrison (Hayley Atwell) wakes up. She looks over at her phone, which buzzes with texts from Connor Wallace (Eddie Cahill). It is an address. It fact, it is a crime scene. Hayes looks around, a small smirk crossing her face. “Honestly, I was hoping for brunch, but an active crime scene is a close second”. As they walk and talk, Wallace gives the necessary exposition for the infamous Black Orchid Killer. In fact, a woman had been found savagely bludgeoned just the previous night. Most notably, bludgeoning is the exact same M.O. as the Black Orchid Killer. However, there’s one problem, a man is currently in prison on a life sentence for the murders. Could the wrong person be in jail? Or is this simply a copy cat? CIU is now on the case.

As the team arrives the next morning, Tess (Emily Kinney) already has the case board ready to go. It turns out the unassuming paralegal has a deep seeded fascination with serial killers. Maxine (Merrin Dungey) chuckles, “Note to self, don’t stay late in the office with blondie”.

Later, Tess joins Sam (Shawn Ashmore) as he questions Clark Sims (Patrick Breen), the jailed Black Orchid killer. She’s fascinated by the case, and actually begged Hayes to let her speak with Sims herself. Talking to the man, he’s an “odd” one for sure, but the interview is completely inconclusive.

Meanwhile, Hayes and Frankie (Manny Montana) leave to question May Defranco (Elena Shaddow). It turns out, she is the only victim who survived an attack by the Black Orchid Killer. They find May rattled at the news of not only the new murder, but also the appeal. She emotionally recounts the night of her attack. However, due to the savagery of the beating, she’s unable to tell tell them much more. In fact, she was in a coma for a year afterwards, unable to even testify at Sims’ trial.

That night, Hayes and Wallace sit down to dinner. It turns out, the lawyers are fundamentally unable to discuss anything that doesn’t pertain to work. Hayes, desperate to enjoy this time, suggests they make the case off limits. However, they can’t think of anything else to talk about. The awkward moment is thankfully interrupted by a call from Tess, who tells them to turn on the local news station. They flip on the television just in time to see Sims proclaim himself the Black Orchid Killer live on the 6:00 news.

Later, Tess visits Sims. She presses him, hoping to further understand why he would confess to a crime he didn’t commit. Sensing she’s getting through to him, Tess tells him the story of her Aunt’s murder. She talks about her difficulty moving on with her life since that time. Tess’ theory is that Clark is innocent, but he finds prison safe. He likes the routine. It turns out, this gets through to him. “I’m not a normal person,” he tells her. After Tess promises to help him, he recants his story. He’s innocent.

Tess returns to the team, hoping to convince them of Sims’ innocence. Sitting around the table, each pages through a stacks\ of notes. Did he even have time to commit the murder? Sims clocked out from work at 5:30pm on the night of one of the murders, which the coroner reported happened no later than 6:00pm. Hayes sends Sam and Maxine to run the route. They need an answer to that question.

Meanwhile, Hayes and Wallace are preparing for dinner as she wraps a call with Sam. It turns out that they found a vital clue when they visited Sims’ former place of employment. The learned he had assembled an order of windows which was later installed in a victim’s apartment. Hence, the presence of his fingerprints inside the apartment, which was a primary piece of evidence in the case, is no longer valid. As they step outside, Wallace receives a call. A new suspect has been arrested.

Desperate to get access to the new suspect, Joe Kaplan (Shawn Parsons), Hayes sends Maxine and Tess to question him. The interrogation quickly spirals out of control due to poor decisions by the detective on the case, Nick Cestero (Berto Colon). Smartly, Tess interjects. She stops Joe abruptly, telling him he needs to speak to a lawyer. In fact, Tess did everyone a favor. Everything Joe was saying would have been inadmissible in court due to the fact he had yet to read his rights.

Meanwhile, the rest of the CIU team dives into the witness statements. Everyone seems to finger Joe.

As Tess and Sam talk later that night, he scans through his email. Opening one, he discovers that Joe has sealed juvenile records. As they look through the files, they stumble across a picture of Joe’s sister Sonya (Jennifer Gibson). Surprisingly, she looks exactly like a number of victims. According to the court records, Sonya had been repeatedly molested by Joe when they were children.

Later, Sam and Maxine question Joe, who has now lawyered up. When they confront him about the records, he insists that the molestation charge was simply a misunderstanding. The kids were playing doctor, and his step-father “saw what he wanted to see”. His story is corroborated by his sister, who insists her brother is innocent. However, she reveals one interesting bit of evidence. It turns out, Joe has substantial nerve damage in his right arm. Could he have even mustered the amount of force necessary to commit murder?

According to Joe’s medical records, he couldn’t lift his arm above his shoulder. Frankie and Tess run a scientific experiment on test dummies. While they look at the results, they determine it would have been impossible for Joe to be the murderer. His arm was too weak.

So, if it wasn’t Joe and it wasn’t Clark, the Black Orchid killer is still out there. Needing to find a needle in a huge haystack, they team up with the NYPD.

As the team rapidly nears burn-out, they stumble on the records of Don Cutler (David Huband). Not only do the timelines of his arrests match-up, but as soon as Tess discovers a picture of Cutler’s step-mother, they know this is their man. According to court records, he’d been horribly abused by the woman, thus giving him motive.

However, upon going to his apartment, they discover he’s missing. It doesn’t take the team long to remember the only surviving victim. As they approach the house, the police are already there. Entering the living room, Cutler lies dead in the middle of the floor. He had tried to kill her, but she managed to get the jump on him.

As the episode comes to a close, Clark Sims goes free, and the team are once again successful. Meanwhile, Hayes and Wallace are still striking out. Their jobs are their lives, and no matter how hard they try to not talk about work, they can’t. Resolving to just be themselves, they clink their glasses.