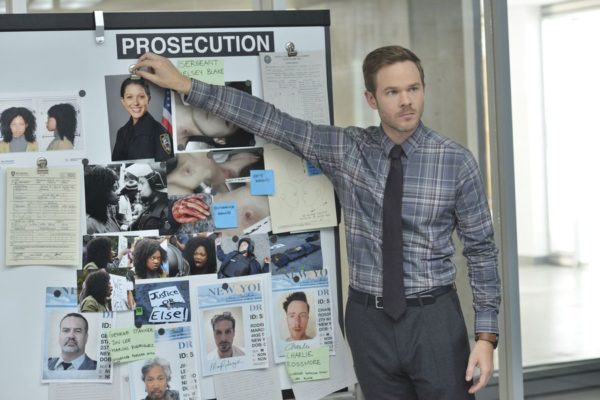 As this episode of Conviction open, there’s a noticeable different tone. Gunfire erupts in the middle of an escalating protest. A female officer drops to the ground, bleeding from a gunshot wound to the neck.

The narrative flashes forward to the CIU offices. The team watches television as DA Conner Wallace (Eddie Cahill) addresses the media. He reports that the police have killed an unarmed black teenager. He pleads with the people of the city not to riot. This doesn’t deter Hayes Morrison (Hayley Atwell), who quickly steers her team to pick up a racially charged case. It’s a perfect time to make another statement.

The team bickers, but agrees to pick up the case of Portia. A black social justice advocate, she was arrested after Sergent Chelsea Blake was killed when a riot Portia organized escalated out of control. Lawyers moved her trial to Albany, but even in the trial’s new location, an all white jury convicted her in less than 3 hours.

Frankie (Manny Montana) and Tess (Emily Kinney) settle down in front of a wall of social media pictures. As they scroll through the images, they discover the first hole in the case. They stop on a picture of a Charlie Rossmore (Daniel Patrick Flemming) destroying a police car. Rossmore was the main witness for the prosecution. However, the picture and the murder happened at the same time. Rossmore could not have seen the shooting from where he was.

As a result, they question Charlie, and quickly are able to poke more holes in his story. He finally admits to lying under oath, making up his story to escape a vandalism charge.

Meanwhile, Hayes goes to visit DA Wallace, who’s in turn being visited by his council, Hayes’ ex-girlfriend, Naomi Golden (Ilfenesh Hadera). Naomi is beautiful, confident and self-assured, just like Hayes. This is going to get interesting.

At the same time, the team makes their way through a sea of witnesses. Everyone seems to be telling a different story in the racially charged case. Some of the versions say Portia held a gun, others say she just had a cell phone. As they stare at still more pictures, they discover an inconsistency. There’s another woman at the protest, and to the team there’s some noted physical similarities to Portia. Could the witnesses have mixed the two women up? As they talk, the team is split down uncomfortable racial lines as the subject of cross-racial identification comes up.

This rattles Tess. She opens up to Frankie, recounting her aunt’s murder. Just a child, she had walked in and saw the killer. She admits to Frankie, “He was tall, thin and Asian.”. She continues with her story. Staring at a police line-up, she thought she picked the right man. She guessed wrong. As a result, she was responsible for the conviction of an innocent man, who spent five years in prison because of her.

Portia’s case rattles everyone. Maxine (Merrin Dungey) finds herself taking heat from all sides. As a police officer working with CIU, she butts heads with her former co-workers. In this episode, she faces off against Officer Blake’s husband (Nicholas J. Coleman), a former patrol officer who held his dying wife at the crime scene. He can’t understand why another officer is trying to set his wife’s killer free. However, because she’s a police officer, she clashes with Portia, who sees her as a traitor to their cause. Crumbling under the pressure, Maxine retreats.

Meanwhile, Frankie speaks with the Medical Examiner. While the man maintains that the murder weapon was correctly identified, he casts doubt on the actual trajectory of the bullet. While everyone had initially thought that Sergeant Blake was killed from the front, he admits that the entrance wound and the exit wound could have been confused. They draw up release papers, as this exonerates Portia. However, after speaking with Wallace’s office, they must find the real killer, or risk still more political scandal.

Frankie and Tess walk the crime scene. With a fresh understanding of the trajectory, they pull a bullet out of the wall. The police inspected their weapons carefully after the shooting; hence it couldn’t have been any of the officers present. As the team takes another look at traffic cam footage, they discover something they hadn’t seen before. A security guard, who had previously been interviewed as a witness, hovers where the bullet came from, an empty holster on his hip. Have they found their killer?

When they go to question him, he runs. As Sam and Maxine have him pinned, he draws, nerves pulsing through his body. Overwhelmed with fear of what could happen to him, he kills himself. Maxine and Sam are powerless to stop him.

Finally, for the first time in the short series run, we see a truly happy success for the team as Portia is released in the company of her husband and young daughter. This is a unprecedented success for the CIU.