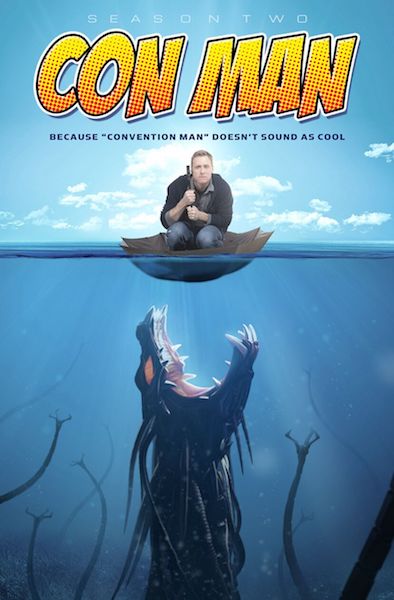 Con Man came into the world as a ground-breaking crowd-funding campaign, and then developed into a web series on the brand new streaming website, Comic Con HQ. After a successful first season, season two premiered on the site Thursday December 8th.

Do you have any con stories that season two reminded you of?

PJ: All of the events that we do in each of the seasons have some kernel of past experience with Alan (Tudyk) and Nathan (Fillion)’s life. Then they take it and extrapolate it into something that’s even more funny. Every little incident, there was something similar that happened at a con somewhere.

Felicia: One time I saw an actor who would literally take all his meals home from the green room. That’s not in this season, but I always thought that would be funny. There’s a lot of actors on set who do that too. They take all their meals home…

Mindy: I do that!

Laura: My weird experiences involve tattoos. At my first convention, a guy came up to me, who had my face tattooed on his leg. Someone else had me sign their arm, and then came back a couple of hours later with that tattooed on.

What are your thoughts on typecasting? Do actors resent being cast in a certain way?

Felicia: It’s a double edged sword. In Hollywood, people like to tag you. It’s easier,  because there’s so many people wanting jobs. If you have a very distinct personality, it can help you… but it can be a little limiting. I created all my roles to get away from a stereotype that I encountered, but then it created another stereotype for myself: the hacker, geeky girl. As long as there’s some opportunity to evolve.

Mindy: Sometimes it’s lovely, because it keeps us busy and it keeps us working. But then, creative wise it can be a little stilting because we’re not challenged to do something else, because people don’t see you that way.

Laura: In the sci-fi genre, the fans are so incredible, and so knowledgeable. It is nice to be in that genre because they really do appreciate you, and support your work. Once your typecast, it is difficult. We want to play different people, and challenge ourselves. It’s nice to be able to change, but again, work is work.

Alison: When you’re typecast in this geek, nerd world, you have the best fans on the planet.You’re guaranteed to work in some capacity when this is your fanbase.They are so loyal, and all they want is more and more. If you are typecast, it’s the best world to be in.

Mindy, how much of your character’s craziness is on the page, and how much is you?

Mindy: I would say, probably 50/50. I am a little insane and I can tap into her pretty well… this is a great, fun part for me. I don’t get these parts very often. We talked about stereotyped, being the meaner… authoritative…. she think’s she’s really good, and she’s just not. A lot of that is me. I think we have to tap into a little of ourselves.She’s pretty wild, and I’ll go for anything.

How have the fan reactions been for Con Man as compared to your other roles?

Felicia: I think people have really enjoyed the performances, and they see something that they recognize in the show. It comes from a place of love. In more mainstream culture geek culture is disdained upon, and made “other”. Alan definitely writes and makes the show from a point of view of love. His only self-loathing is to himself. He’s not making fun of people, he’s making fun with them. People are behind the show who really love the culture.

Nolan: A lot of the fans that I met are really stoked, because a lot of them were backers of the original campaign. I think they feel a certain ownership to the stories and to the characters. They were such a big part of making it happen.

Alison: One of the most incredible acts of fandom I ever witnessed was at our first comic con before the first season came out. A woman was at our panel dressed as Wray Nerely in Spectrum. I think at this point, one image of Alan had came out in that costume, so the fact that this woman had replicated this in time for our panel was incredible to me. That’s a true fan, right there.

How much of the appeal of doing the show, and how much is the convention acquaintances you normally hang out with?

Alison: I feel like I have learned so much from working with Alan these past two seasons, when the paycheck shows up I’m like, “Oh yeah, I got paid for that”. It’s such a fun set to work on and to have fun, to learn, to grow and do what your passionate about is the best thing an actor can ask for. The paycheck just pays the bills.

Laura: For me, working with Alan was a lot of fun for me to be there and watch him be silly, to watch his creative mind going 24/7 and working with Nathan.

What are you most excited for fans to see in season two?

Nolan: I think it’s cool they get to know a little more about Jerry Lansing. A couple of the episodes go a bit deeper into what his life is like outside the cons, and I think that’s cool.

Who did you get to meet or work with on Con Man that you are a fan of?

Alison: I didn’t get to work with him, but I was really stoked with I got to meet Nolan at our first panel. I told him that. I love the ‘Uncharted’ games, so meeting Nolan was a highlight.

Nolan: That’s so sweet. Thank you. Mine is just as sappy. Mindy Sterling. I was always a fan of hers, I knew that she had done so much improv. Of course there was the Austin Powers movies. I worked on a couple cartoons with her. When Con Man came around, and she was perfect for this role, and we got to get in and work things together and just sit there and laugh. She’s a great talent. Fingers crossed for season three, more Jerry and Bobbie.

Mindy: I have to say for me, I didn’t know anyone. I had never met Alan. I just grew to so respect and love him. Because we have so many scenes together, I can’t wait to work with him, I can’t wait for him to correct me when I get something wrong. He’s been one of my favorite, favorite people to work with. So he excites me in a wonderfully talented, actor, writer… everything… and Nolan.

What movies, music or television series are you fans of?

Nolan: Westworld. It’s my new thing. You can’t even blink or you miss something. It’s one of those shows where you can enjoy watching it, but you’re trying to figure out what is going on. There was a reveal recently with one of the main characters, I was alone in my living room and I jumped up on the couch like, “No way!”.

Alison: I audibly gasped at the last episode.

Felicia: I love Dirk Gently. I’m so excited, I think they got picked up for another season. It’s the perfect mixture of weird humor and sci-fi. I love the way it’s shot. It’s so hip, and it’s definitely the show I get the most excited about on my DVR.

Mindy: There are two. One is Rectify, which is on Sundance. A little slow, but the characters and the acting are phenomenal. The other is Black Mirror. It’s interesting. Every episode is different. Some of them are better than others, but some of them are incredibly creative and thoughtful, weird, eerie, edgy. I like that.

Listening to the cast and crew of Con Man reflect on the show, it is so clear that this series comes from a place of love. The actors on the show are not only fans of popular culture as a whole, but they are fans of each other. It doesn’t matter if you’re a fan of Firefly, Star Trek or The Walking Dead. There’s something in Con Man for everyone who considers themselves a fan.