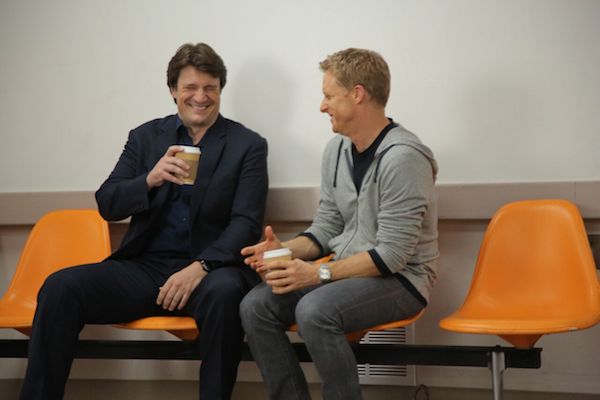 When we last left Con Man, Jack Moore (Nathan Fillion) was ready shoot a movie version of Spectrum. He has the rights. He has the cast. And, much to his surprise, his schedule is suddenly wide open.

So far, season 2 of Con Man has done a fascinating job depicting the other side of Wray Nerely’s (Alan Tudyk) life. While season one was set in fan conventions, the second season has shown what a convention guest’s life is like the rest of the week.

This episode of Con Man presents the face to face scene between Jack and Wray that viewers want, and deserve. Jack and Wray’s scene’s together thus far, have been minimal. However, Fillion and Tudyk have impeccable chemistry. While Fillion managed to bring a number of his Firefly co-stars onto Castle, other than Con Man, Tudyk and Fillion have done very little work together since Serenity. In the simply shot hospital sequence, viewers get to see the talented actors play off each other. They’re alone for most of the scene, face to face in a hospital hallway. The two performers appear to enjoy working together immensely, and it’s clear on screen.

Alan Tudyk continues to do an amazing job in his portrayal of Wray, an actor struggling under the weight of his former part. Through the development of Wray and Jack, Con Man does a great job tackling two separate perspectives on the same situation. Suddenly, Jack is at the same level as Wray. Prior to this season, Jack has been a suave movie star. He didn’t need Spectrum anymore. However, with his roles rapidly disappearing, he does now. Meanwhile, Wray is still desperately trying to separate himself from Spectrum, and from sci-fi in general. The motives of the richly developed characters are clear. Will the two men be able to find a meeting point?

Meanwhile, the series continues to eviscerate Hollywood in the funniest way possible. In this episode, it’s Wray’s turn to meet his agents. As Wray struggles to get his point across, even the employees at the agency can’t keep up with the head-spinning turnover going on around them. It turns out, in Hollywood, while you can be an agent one minute, you can be a valet the next. Keep an eye out for a stellar cameo by Stephen Root as an agent turned valet.

Finally, the pacing of season two is starting out in an interesting manner. Things are on a bit of a slow burn, which may or may not play well with some viewers. The show is in a different world right now from Bobbie (Mindy Sterling), Jerry (Nolan North) and Karen (Felicia Day). While, these rich and vibrant characters were a huge part of season one, it feels strange to not have them in the action quite yet. However, the show has already demonstrated its’ ability to shift and evolve. It will be interesting to see how the Con Man brings back its’ richly talented, supporting players.