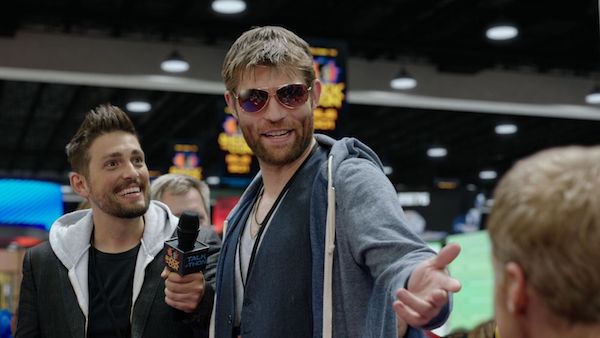 This episode, entitled the “Dawn of Girth” is very literally that. For much of Con Man, the primary conflict has been between Wray (Alan Tudyk) and his internal demons. However, since episode one there has been the unseen presence of a brood of Hemsworth brothers waiting to come over from Australia and steal American roles. Just as Wray thinks Doctor, Cop, Lawyer is finally his, he learns he’s competing against a long lost Hemsworth brother, Girth (Liam McIntyre) for the part. And it seems, Girth has no intention of just rolling over to give Wray the much coveted role.

Liam McIntyre is a great addition to the Con Man cast as the long lost Hemsworth brother. In even just a short scene with Tudyk, it’s clear that Girth will be a great foil for Wray. The actor arrives at Shock-A-Con, knowing that Wray is hot on his heels for the lead in Doctor, Cop, Lawyer. McIntyre came to public attention when he took over for Andy Whitfield on the Starz series Spartacus. The actor brings a likability and charisma to the role of Girth, which make his drastic shifts in personality when the talks with Wray all the more entertaining. McIntrye does a great job establishing Girth’s character early as he gives a charismatic interview with Rico Java (Josh Dean):

I was forced to raise myself on the harsh Australian Outback… spent my days wrestling crocs, and working on my flawless American accent. I survived by hunting, killing and eating wild butterflies, which I don’t have to tell you in Australia are wicked poisionus.

As he talks, Brenda (Liza Lapira), Tiffany (Skyler Day) and Dawn (Amy Acker) swoon at his rugged charms. Everyone else (except for Wray, that is) hangs excitedly on his every word. However, this isn’t the Girth that Wray sees, but will anyone else believe him?

Everyone who’s ever waited in line for a convention photo shoot will enjoy the scene which follows, as the Spectrum cast sit for a group photo session. The scene is shot from a very interesting perspective, seemingly coming from the point-of-view of the camera. As fans enter and sit down, the shutter clicks and there’s a quick still of the picture. The technique assists with the visual humor, cleverly disguing the disappearance of Brenda and Stutter (Henry Rollins), making it seem instantaneous. When the editing of the sequence combines with Wray’s reaction, it leads to a hysterical beat. Furthermore, as the scene evolves, so do the pictures. They begin as fairly generic convention pictures. As the scene continues the casts’ poses get wackier until finally Dawn and Wray give into their heated sexual chemistry. The last picture shows them mid make-out, and Dawn seems to be groping a smiling Tiffany.

Once again, Tiffany has some of the funniest moments in the episode. Her work particularly in the photo shoot scene is spot on. Her timing and delivery make an even simple line like, “I’m a handful” into a laugh out loud moment. Also keep an eye out for when she tries to convince Jack’s (Nathan Fillion) cardboard cutout to give her his cocaine stash.

Con Man is building to its’ conclusion, and with the arrival of the charasmatic (and ruthless!) Girth Hemsworth, the stakes are suddenly very real. Will a Hemsworth steal yet another role from a hard-working American actor?