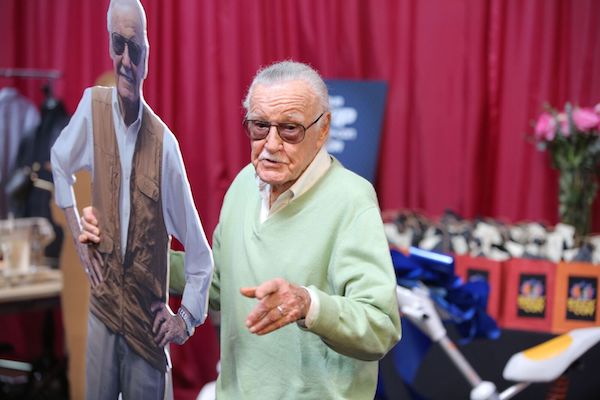 The entire second season of Con Man has been building towards Shock-a-Con. In this week’s episode, the exciting event is finally here. As he did at the end of season one, Wray (Alan Tudyk) finds himself sitting down with the Spectrum cast… Well, everyone except Jack (Nathan Fillion), that is. Jack is a “V-VIP”. Unfortunately, Wray is only an “IP”. The “V-VIPs” have all the best con perks.

Wray usually finds himself at conventions which are a level or two below Shock-a-Con. However, looking at the live, 24 hour television coverage which opens the episode, it’s clear that this is the Con Man equivalent of San Diego Comic Con. The television runner features comedians Riki Lindhome (1/2 of Garfunkle and Oats) and Josh Dean as anchors Janet Carney and Rico Java. Together, they craft a tone which is best described as E! News meets G4, with just the right amount of DragonCon TV sprinkled in. The two have many laugh out loud moments together, most notably as they reflect on the recent popularity of post-apocalyptic YA fare in contemporary pop-culture. “Yes! I love post-apocalyptic adventures! Have you read the books?”/ “Nope!”/ “Me neither. So good!”.

It’s always great when Con Man brings the Spectrum cast together, and this episode develops and expands the groundwork the show established in season one. While she doesn’t have much screen time in the episode, Skyler Day is a particular stand-out as the troubled, former child star Tiffany. When she realizes the booze she’s drinking is actually water, the look of disgust which crosses her face is perfectly executed, “They’re all just water?”. This episode also contains some great character work by Liza Lapira as Brenda, the actress who’s chronically struggling with her weight. In fact, she’s hiding from her latest weight loss product which paid her $10,000 for every pound that she lost. However, Brenda ended up gaining weight. As a result, they want their money back. She spends much of the episode in a paranoid panic, hiding from the “black turtles” she’s convinced are after her.

The episode also sees the Con Man debut of Laura Vandervoort as Finley Farrow. Not only is Farrow at the convention marketing the popular, post-apocalyptic movie series Ambivalence, but she has also recently been cast as the female lead in Doctor, Cop, Lawyer.  Furthermore, she has final approval of her Doctor, Cop, Lawyer co-star, and it’s down to two actors: Wray Nerely and “Girth” Hemsworth (How many Hemsworth’s are there, anyway?). While she has only one short scene in this episode, it will be interesting to see how this role develops. How will Dawn (the always brilliant Amy Acker) who also returns this episode, react to another lady in Wray’s life?

The entire second season of Con Man has been building towards Shock-a-Con. As the action of the narrative transitions to its’ final stage, will Jack be able to finance the Spectrum movie? Will Wray be able to push all his Spectrum baggage aside to land Doctor, Cop, Lawyer?