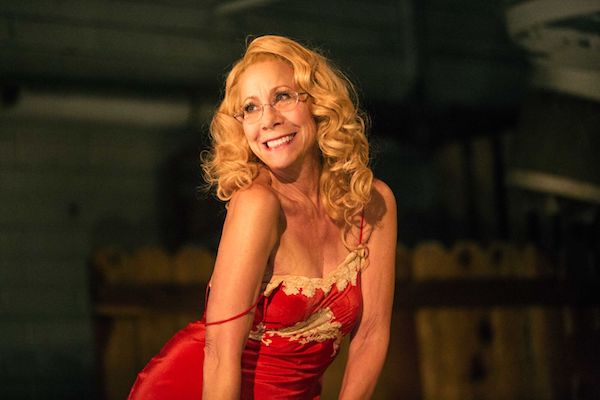 Throughout season two, Con Man has established itself as a web series which is unafraid to experiment with new forms. In “I’m with Stupid”, the creative team’s experimentation ratchets to a whole new level. This week’s episode sees the cast and crew not only imagine, but stage a musical.

The episode opens as the curtain rises on Lou Ferrigno’s musical remake of the classic novel, Of Mice and Men. The play is comically titled: I’m With Stupid. Since everyone is still locked in a storage room with nothing better to do, the team of science fiction actors have managed to stage a musical which rivals even the best Mickey Rooney and Judy Garland productions. As Darth Vader himself once said, “Impressive. Most impressive”.

In fact, the focus of the first half of the episode is the staged musical. The performance only comes to an end with the arrival of Bucky, the exasperated convention director. For a series which is typically quick and punchy, the structure of the episode stands out. The length of the musical sequence perhaps feels a bit long for for the short web-series medium. Throughout the episode, numbers from of the entire musical are shown, and each character has at least one song to sing. However, while the length of the musical might not work for some, the creative undertaking this episode represents is impressive.

Furthermore, the musical sequence is packed with little additions which provide an interesting layering of the show into the Con Man universe. These humorous touches within the stage play are a creative treat to watch. The examples range from a comical “Flame On” painted into a cardboard campfire, to Jerry’s (Nolan North) enthusiastic portrayal of a dying dog, who just won’t quite die. Not only do these funny moments induce a chuckle, but they remind you that these actors (Alan Tudyk, Lou Ferrigno, Mindy Sterling, etc.) are all playing characters in Con Man, who are in turn playing characters in the musical. It’s quite complex when you think about it.

As a matter of fact, the entire cast deserves a virtual round of applause for this episode. The team of performers (lead by Tudyk and Ferrigno) completely commit to the musical. They do a heck of a job. They are clearly enjoying themselves, and are selling it all the way to the cheap seats. In fact, watching Wray’s portrayal of George, one must ask: Is there anything Alan Tudyk can’t do?

In “I’m With Stupid” the Con Man team continues to show creative courage and versatility. It’s no small feat to write a musical, especially on a small budget.  Each member of the cast managed to shine in their layered and commited performances. While the episode feels like a bit of a departure from the typical Con Man tone, “I’m With Stupid” is quite the creative achievement.