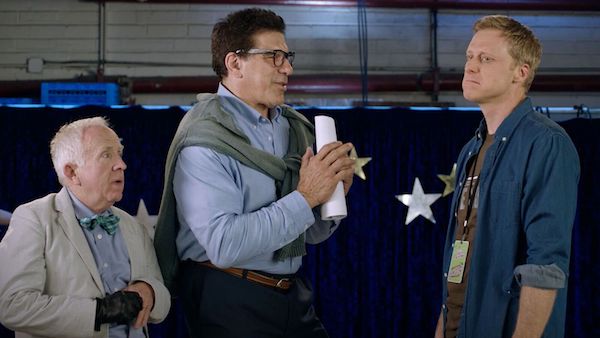 While the episode is bursting with talent, Lou Ferrigno is a standout this week. The actor is perhaps best known for his portrayl of Bruce Banner’s mean, green alter ego in The Hulk. At the moment, Ferrigno’s primary project is an Off-Broadway production of the John Steinbeck classic, Of Mice and Men. But, this time the story of Lenny and George is going to be a musical, and Ferrigno wants Wray to play one of the leading roles. Wray is understandably surprised when the gigantic Ferrigno approaches him to play Lenny. While Wray’s involvement in the project grows, everything only spirals out of control around him. The well-written script by Tudyk and Josh Dean combines with a stellar, and very self-aware performance from Ferrigno, and the result is excellent.

As the episode continues, the narrative moves further and further into Marx Brother’s territory. Wray’s exasperation grows as he suddenly finds himself locked in a storage room with Ferrigno. The actor is intensely focused on his new project, almost single-mindedly so. With each passing minute, more people stumble into the room. However, they too become trapped as the door locks behind them before Wray can shout, “Hold the door!”. The hilarity grows when everyone’s favorite fairy costumed Spectrum fan also finds his way inside. The scene is a great one. Wray seems to be the only person bothered by what is going on around him. As mentioned before, an unselfish performer, Tudyk is equally strong playing the comic relief or the “straight” man.

Lastly, the comedic chemistry between Mindy Sterling and Leslie Jordan leaps off the screen. They had a number of scenes together in season one, and they immediately return to form in this episode. Their banter keeps the episode moving. At one point, Jordan sprawls seductively in a chair. He says, “They’re doing a spin-off of my character, a dark origin story: the persnickety adventures of Dr. Fussbudget.”  Bobbie’s responds, “Ohhhh, you’ve hit the big time. You wanna hit something else?” He looks her over, “Big time!”. At this point, an exasperated Wray leaves quickly.

“Pin Cushion” contains a lot of moving parts as the Con Man team visit Long Con. The episode makes a excellent use of its’ many co-stars. Between great work by Lou Ferrigno and Leslie Jordan, the series continues to create fun and interesting characters to populate the Con Man universe.

Both seasons of Con Man are available through Comic Con HQ.