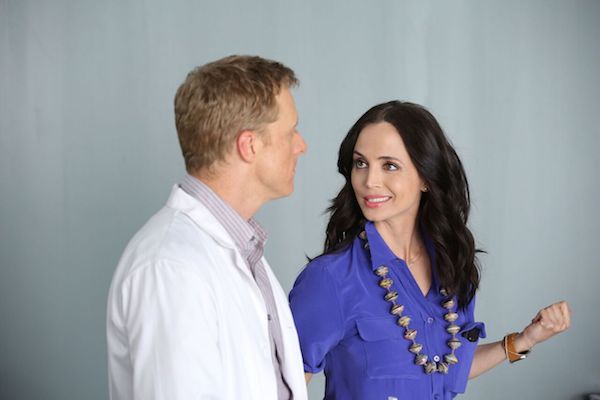 The episode is an excellent one for Tudyk. It has been mentioned before that as an actor, Tudyk thrives when faced with self-deprecating narrative material. As the episode plays, Wray finds himself faced trapped in an actor’s nightmare audition scenario.

The Con Man creative team crafts an effective comedic environment, and you immediately feel for Wray as he sits down outside the audition. The insecure Nerely finds himself surrounded by good-looking Australians, also auditioning for the sidekick role. After all, episode one of Con Man informed us that Australians are replacing American men in Hollywood. While Wray sees them as leading man material, they tell him that they are only the every man type. In fact, all of the Hemsworth brothers have auditioned for the lead role.

From there, the scene only crumbles further for Wray as he enters the audition room. Not only are the casting team preparing to go to lunch, but no one wants to focus on him. In fact, they tell him that the modern audience is distracted, so Wray needs to break through the noise.

It seems like a comedy of misfortunes as Wray’s audition spirals from bad to worse. This is until Wray finally snaps. As an actor, Tudyk doesn’t get to crack-up a lot, but he shines when he gets this kind of scene. Another stellar example is the interplay between Wash (Tudyk) and Mal (Nathan Fillion) in the “War Stories” episode of Firefly. Wray snaps, calling out everyone from the marketing exec who’s looking at Grindr, to the 10 year old social media team at the back of the room for drinking coffee.

This episode of Con Man does a great job creating an expansive, creative environment. As such, this allows the performers freedom to play off what’s going on around him. “Gum Drop” is very much centered on Wray, and gives the talented Alan Tudyk yet another chance to shine.

Come back every Thursday as new episodes of Con Man drop on Comic Con HQ.