Home » Games » Ever Want to Run Your Own Convention? Now You Can with Con Man: The Game

Ever Want to Run Your Own Convention? Now You Can with Con Man: The Game 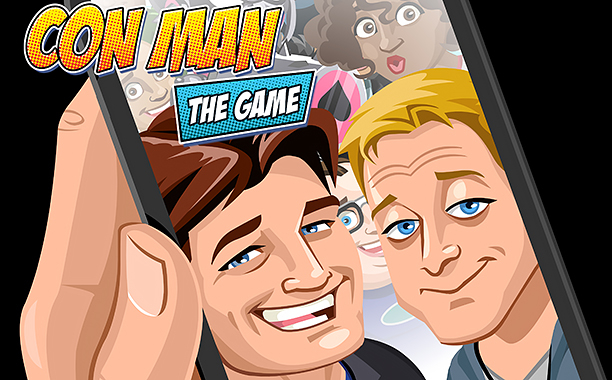 Con Man, the web series created by and staring Alan Tudyk and Nathan Fillion, now has a mobile game.

For those not familiar with Con Man, here’s the official season 1 synopsis.

Con Man centers on the post-show life of Wray Nerely (Alan Tudyk) the co-star of “Spectrum,” a sci-fi series, which was canceled before its time and went on to become a cult classic beloved by fans. Wray’s good friend, Jack Moore (Nathan Fillion) starred as the series Captain and has gone on to become a major celebrity, while Wray (Tudyk) hasn’t found his desired level of stardom. Wray is the begrudging guest of sci-fi conventions, comic book store appearances, and different pop culture events; however, everything is not as it seems from the outside. The series will explore these events and all the weird and crazy things that happen to them along the way.

Obviously Spectrum is a spoof of Firefly, and the show is a comment about fandoms and the convention circuit in general.  It’s great fun, staring Alan Tudyk and Nathan Fillion (obviously) and other stars such as Felicia Day, Joss Whedon, Summer Glau, Tricia Helfer, Seth Green, James Gunn, Alison Haislip, Jewel Stait… look, just go over to the website and check out all the cast, it’s a who’s who of science fiction shows and geek culture.

Now that we have that information out of the way, you should note the game came into being through a stretch goal in the original Con Man Indigogo campaign.  The crowdfunding campaign originally asked for $425,000 and ended up raising over $3.1 million.  When the $3M mark was reached, it triggered the creation of a mobile game, free for download.  So now you know how the game came to be.

The idea of the game is you have to build and run your own comic book convention.  You deal with everything from hiring talent and crews, to cleaning toilets, emptying trash and dealing with all the excitement a con has to offer.  Just be careful, aliens from the world of Spectrum make an appearance every so often to run amok through all your hard work and try to destroy everything you’ve built.

Entertainment Weekly gave us the official trailer and a few quotes from the creators.

“I’m addicted. I should be clear, to Con Man: The Game,” Tudyk said,  “We’ve been working on this since the crowdfunding campaign. I’m so glad we can finally share it with everyone.”

“I think I should get a special code that gets Nathan Fillion to my convention for free, anytime I want,” said Fillion.

Check out the launch trailer below.  Thanks to IGN who provided a video I could pull and embed into the site, and thanks to Techzamazing for providing a gameplay video.