Comics legend Len Wein has passed away. He leaves behind his wife and decades worth of content that shaped the comics world. Wein co-created Wolverine, Swamp Thing, Storm and so many others, not to mention editing The Watchmen. Because of his huge impact, the comics and writing community has poured out their sympathies and shared their condolences. We will miss him greatly.

Geek Girl Authority was lucky to have him on our panel at 2014’s Stan Lee’s Comikaze where we had a tournament-style panel called Iconoclash. We, Legion of Leia, Len Wein and others had a blast as we took 64 of our favorite genre female characters and whittled them down to a final four, then two and then one. It was a joyful, fun and positive experience. In case you’re wondering, Len’s final vote was for Ellen Ripley. 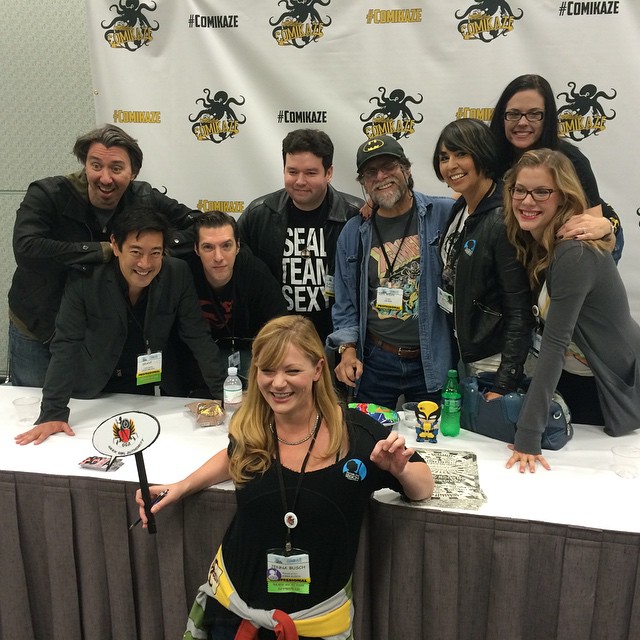 Here’s what his colleagues and fans have been sharing on social media.

I just learned that my friend and writing inspiration @LenWein passed away this morning. My love and condolences to his wife, @mcvalada.

Len Wein. He wrote Swamp Thing, Phantom Stranger, & my favourite Batman stories. He showed 12 year old me that comics could be literature.

Len Wein was the editor who brought the British creators to DC. He was one of the nicest people I've met, in 30 years in comics.

He will be missed. And I will miss him.

After my 1st Batman, I was struggling. Hated my stuff. Len wrote a note, said he loved the issue. Gave me the confidence to keep going.

1st time I met Len I, dickishly, said, "You should be as famous as Stan Lee!" He responded, appropriately, "I am, you just don't know it."

Extremely saddened to hear of Len Wein's passing. Incredible writer, incredible person. Thank you Len for all you gave to us. RIP

Blessed to have known Len Wein. I first met him in 2008. I told him – from his heart, mind & hands came the greatest character in comics. pic.twitter.com/cFqL1uy0JV

Incredibly sad about @LenWein passing. A gentleman and a comics legend. The world is less bright without him. <3

Our old pal, Len Wein, caught the last train out. Much will be said of him; I'll just say I loved him. Godspeed.https://t.co/4DYfnWfTRS

We are deeply saddened to hear of Len Wein's passing, and send our deepest condolences to his friends and family: https://t.co/9qLllJAScE pic.twitter.com/0VAtTPPxd6

Rest In Peace Mr. Len Wein. What a wonderful soul. What a tremendous talent. There is no Wolverine and there are no New X-Men without him. His run on The Incredible Hulk was a highlight of my youth. As versatile and talented a writer and editor as the industry has ever seen. Truly a lovely man and I am saddened by his passing. #lenwein #xmen #wolverine #storm #colossus #nightcrawler #swampthing #greenlantern #hulk

Terribly saddened by the news of the passing of comic book legend and gentleman–Len Wein. Long time creator, writer, editor and friend of both DC and Marvel, he created or edited so many of the greats which really defined my peak fandom years. Wolverine! Storm! Colossus!–just to name a few of the juggernauts he brought to life at Marvel. At DC, he co-created Swamp Thing, Amanda Waller and served as the editor on the very best works here–books like The Watchmen and New Teen Titans. His impact and influence are beyond measure, and we will miss him dearly. #LenWein #DC #swampthing #Marvel #wolverine

I had the fortune of meeting Len Wein three years ago at Wonder Con. When I told him I managed a comic shop he was delighted. We talked comics and he told me "women have been in comics since the beginning, don't know why people pretend any different." And then he told me stories of the women he worked with when he was first starting out in the comic world. He was a man that shaped so many of our lives through his stories and characters, he will be missed. #comics #lenwein #wolverine #swampthing #characters #comicbooklegend #comicbooks #marvel #marvelcomics #creator

Len Wein & Bernie Wrightson created the very best monsters ever and taught me to love the monster in us all. Now they're both gone. Sigh.

Btw- he was VERY kind to me when i first started at marvel. Encouraging and shiny. Sadly, Not all his peers are. He was inspiring. https://t.co/ETz40GwMvY

RIP the great #LenWein. He co-created Wolverine & Swamp Thing, both of which gave me a living as a writer & endless pleasure as a reader.

RIP the great Len Wein, prolific and inventive comic book writer and editor and model for Cain, caretaker of the House of Mystery. pic.twitter.com/raWZlhn28c

Just heard. RIP Len Wein. So very sorry to hear it. A terrific writer and a better friend. We will miss you so much.

…we'd consider ourselves eternally lucky. He created dozens. Len Wein was a prince of comics and he wore that crown lightly.

As a kid, I wanted to be Len Wein when I grew up…

Turns out, I still do.

You made comics better, Len.
Rest in peace, friend.

Len Wein. Such a truly sweet, generous, funny, gentle man. We will miss you, so very much.

An epic loss. My soul is crushed. What an amazing, talented, loving human. I will miss him until the end of my days. #RIPLenWein

R.I.P. to comic book legend LEN WEIN, co-creator of not only Wolverine but also one of my favorite characters of all time, the Swamp Thing.

Without #Logan there is no Laura. Thank you @LenWein. RIP pic.twitter.com/GWNY15KCn1

Len Wein is gone. Everytime I got to hang out with him, his smile lit the room. He lives in my memory in my cabana at Convergence. RIP pic.twitter.com/owVAiR1j8K

Our heart go out to Christine, his beautiful wife and his family.

ICYMI:
Capcom dropped more #ResidentEvil news during their #E32021 showcase today! Here is what you need to know. https://www.geekgirlauthority.com/e3-2021-resident-evil/

ICYMI:
Episode four of #GhostTownKiller dropped today and the investigation into Amanda's death continues as Lilith takes another look at old evidence. Check out the full recap here. https://www.geekgirlauthority.com/ghost-town-killer-the-cannibals-test-recap/

ICYMI:
Team Flash works overtime to save Barry and Cecile from an unknown enemy that's after an ancient and powerful object on #TheFlash. Check out our recap! https://www.geekgirlauthority.com/the-flash-recap-s07e13-masquerade/

ICYMI:
This week's #WomenCrushWednesday goes to one of our favorite Sailor Guardians - Sailor Uranus! Haruka is protective of her fellow scouts and constantly challenges gender stereotypes. Check out why we are crushing on her! https://www.geekgirlauthority.com/geek-girl-authority-crush-of-the-week-haruka-tenou/