Home » Movies » All the Rest » Classic Film Through a Feminist Lens: BELL BOOK AND CANDLE

Classic Film Through a Feminist Lens: BELL BOOK AND CANDLE 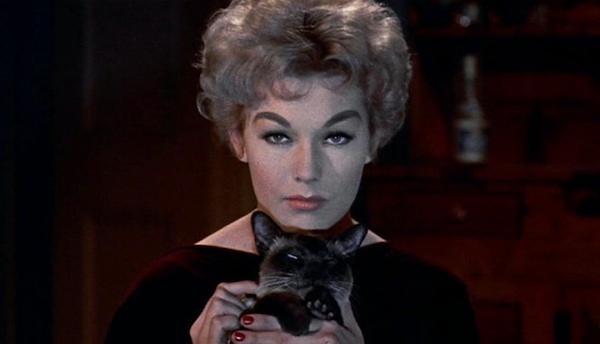 The subject of witchcraft in history is one which is deeply tied to women’s issues and feminism. The depiction of witches in popular culture has evolved from the Wicked Witch of the West in the Wizard of Oz, to Samantha Stevens in Bewitched, and finally to the ladies of American Horror Story: Coven. In analyzing these many examples, the witches are always women, often single and always independent. The 1958 film Bell Book and Candle pulls the witches (this time played by Kim Novak and Elsa Lancaster) out of history, and places them in modern day Greenwich Village. The romantic comedy also presents an interesting perspective on feminism, an issues which was slowly growing in popular culture throughout the 1950s.

The film follows book publisher Shepherd Henderson (James Stewart) as he meets his quirky neighbors: Queenie (Lancaster) and Gillian (Novak). Later, he accidentally bumps into the women once again, when he takes his fiancee Merle (Janice Rule) to a new nightspot. When Gillian and Merle meet, it turns out the two women were rivals back in college. Suddenly, Gillian has Shepherd in her sultry stare. After a well timed love spell, Shepherd is head over heels in love with Gillian, bringing his engagement to an abrupt end. Gradually, affection grows between the two of them, and Gillian falls for him as well.

Bell Book and Candle features an incredible performance by Kim Novak. The actress arrived fresh from shooting Vertigo. Her portrayal of Madelyn in the Alfred Hitchcock thriller would later become one the roles to ultimately define her career. While her character in Vertigo was very much a pawn, she brings a unique independence to the role of Gillian. From her first scene, it is apparent that this character is different. The narrative quickly makes it clear that Gillian graduated with a degree in anthropology from Wellesley. Consequently, tribal masks and relics fill her well decorated apartment. Thus, her character immediately distances herself from the traditionally accepted ideal of femininity in the 1950s.

Interestingly, even her wardrobe subtly plays down her femininity. Her costuming stands out, especially considering Kim Novak’s status as a sex symbol for much of the 1950s and 1960s. Her wardrobe is almost beatnik, more reminiscent of Audrey Hepburn in Funny Face than of the siren Novak had become by this point in her career. When she does dress more feminine, her clothes have more interesting patterns and bold color choices. It is also repeated (and shown) throughout the narrative that her character avoids wearing shoes whenever possible. In fact, the only time we see Gillian softened and made “traditionally feminine” is at the end of the film.

There’s an icy distance for much of Bell Book and Candle to the character of Gillian, which is very much a hallmark of Novak’s star persona. However, as the narrative goes on, and her relationship with Shepherd develops, Bell Book and Candle makes an interesting use of this character trait. As Shepherd falls deeper into her spell, there’s almost a traditional gender role reversal between the characters.  Shepherd paces around the room anxiously:

“Are we going to get married… after two weeks, you can’t say this is so sudden.”

“I hadn’t thought of marriage yet.”

Throughout the film, despite how deeply in love Gillian may be falling, she has difficulty acclimatizing herself to the ideas of love and marriage. In a reflective moment, she says, “I’ve never even thought of marriage. It would mean giving up a whole way of thinking and behaving… I’m not sure if I could. I wish I could”. Falling in love with Shepherd isn’t her first choice, and she doesn’t want to be tied down by marriage.

However, as is often the case in films of this era, the happy ending needs analyzing. (SPOILERS AHEAD). There’s an understandable tension between the couple when Shepherd discovers their relationship stems from a love potion. Shepherd leaves and declares himself done with Gillian. Unfortunately, by this time, Gillian has fallen for him. Later, as she angrily prepares a spell, her precious cat Pyewacket runs away. While she sprints through the streets trying to catch the animal, she realizes that she’s crying. The film has repeatedly told viewers that witches are unable to cry. She’s distraught. She doesn’t want to be human.

Later, it seems Pyewacket had a plan. The cat appears at Shepherd’s office; thus, forcing him to return Pyewacket to Gillian. As Shepherd brings the cat inside, Gillian emerges. She looks miserable and as traditionally human as she has looked throughout the film. Her dress is soft and frilly, and its’ light green color is much softer than any we’ve seen her wearing. Once Shepherd realizes that she no longer has her powers, he forgives her for everything. After all, she must be in love with him if she lost her powers. So, while she has lost everything which makes her unique, Gillian is finally able to get get her “happy ending”.

Finally, Bell Book and Candle proves to be yet another interesting film which reverses itself in the third act. Kim Novak shines in her portrayl of the fun and interesting Gillian. Her character demonstrates the evolution which was just starting in Hollywood cinema. Suddenly, female characters had more depth and agency than they had just ten years earlier. However, as is a staple in Hollywood, the happy ending trumps all. As such, all of the interesting character work is cast aside, and Gillian is metaphorically castrated of her powers before she can have her happy ending.