While I am saddened that I am recapping the Season 1 finale of Castlevania, I am thrilled that we have another season to look forward to. Last time we saw Trevor Belmont, he was dodging both the Clergymen and an angry mob of townsfolk. Above them the demon horde was preparing for their evening attack.

We pick up where we left off, with the angry mob chasing Trevor down despite the bigger threat looming overhead. Inside the church, the Bishop (Matt Frewer) prays in silence. Hearing the door open and close, the Bishop assumes that it’s one of his men coming to update him on the fate of the Speakers. Unfortunately, the Bishop is completely wrong. It is the leader of the demon horde and he has brought some other demons along with him.

While the Bishop maintains his loyalty to God, the demon leader does his best to shake the Bishop’s faith. Claiming that God is no longer in the Church and has, in fact, abandoned the people and the Bishop, the lead demon tries to weaken the Bishop’s resolve. Despite his deep-seated self-importance, the Bishop is truly a man of God, but that doesn’t save him from being eaten by the demon. 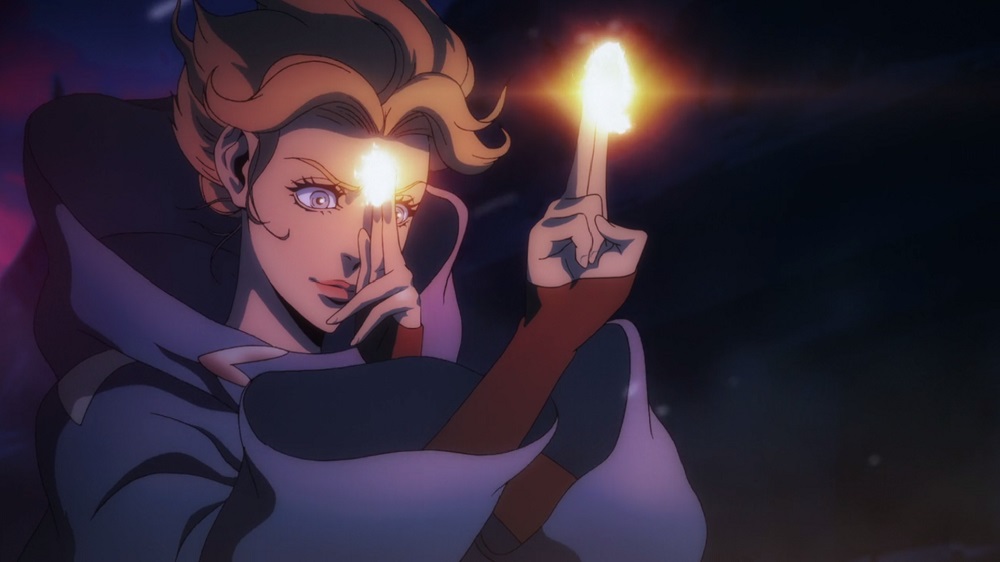 In another part of the town, Trevor Belmont is running for his life. Coming to the main town square, he finds himself surrounded by the townspeople and has nowhere to go. Suddenly a stream of fire rises from the ground and within seconds Trevor is surrounded by a circle of flame. Up on a rooftop, Sypha casts her spell.

This frightens the townspeople even more, with a couple of them yelling “witch” but Sypha quickly corrects their misconceptions. “No! I am a Speaker and a scholar of magic. I serve no demon and I do no evil.”

Sypha creates a path for Trevor which grants him safe passage through the mob. Trevor gets a glimpse of the head Clergyman who lead the mob. Calling him out, Trevor challenges the man to a one-on-one fight.

The fight never happens, however. Before they meet swords, Trevor makes sure that the people know exactly what kind of man the Clergyman is. While defending the Speakers, Trevor condemns the actions of the Bishop and blames him for bringing about all their troubles. Now that the townspeople know they have been deceived, the Clergyman starts to sweat out of fear. A lone man runs up to the Clergyman and stabs him in the chest. This encourages the other men to follow suit with their knives and pitchforks. 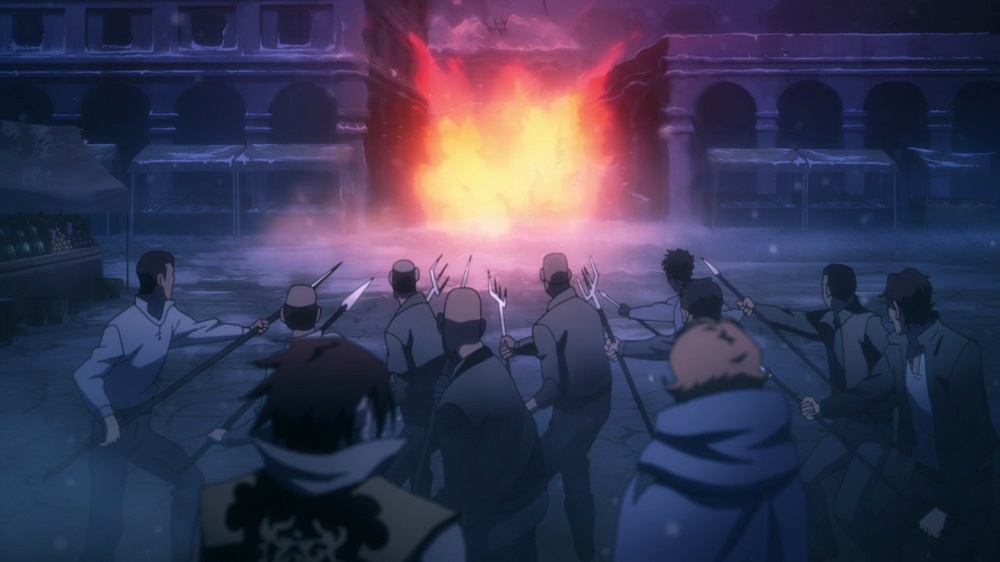 Behind them a building explodes and the townspeople scatter. The demon horde has arrived. Trevor directs the people to go back to the square and begins barking orders. As the only person with experience in dealing with the supernatural, Trevor knows exactly what they need to do. He orders men with polearms to form a barrier while those with swords must coat their blades in salt. He tells a Priest to create holy water and he asks Sypha to lead the demons into the square.

With the ragtag “army” in place, they prepare for the demon incursion. As the demons begin their attack, Sypha flanks them in with ice walls and Trevor throws holy water on them, injuring them. The pikemen start their forward advance while the ice wall closes behind the demons. Then the men the salt-coated blades start bringing the demons down one by one. With the bombardment of holy water, ice and salt, the demons have no chance of winning. The lead demon, the one responsible for killing the Bishop rushes towards Trevor, but Sypha impales him with large ice spears.

The victory is short lived as the ground breaks, sending Sypha and Trevor into the deepest levels of the catacombs. There they find enormous mechanical gears and a massive chamber. But the structure they land on is unstable and soon crumbles, sending them onto the two heavy gears. They try to find stable ground, but they are unsuccessful.

Falling even deeper into the catacombs, they land in an elaborate chamber and in the center lies a coffin connected to two syphons of blood. As they slowly walk to the coffin, Trevor accidently steps on a trigger and the coffin opens. A man comes floating out of it with a deep red gash in his chest, but we know that it is not Dracula. 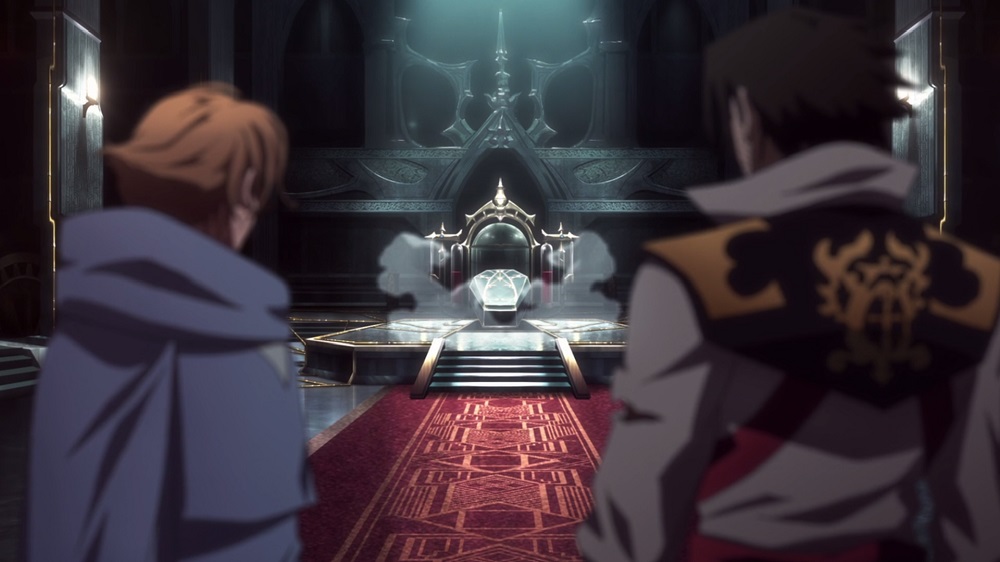 Sypha immediately believes him to be the Sleeping Warrior of legend, but Trevor refuses to believe that. He knows that they are in the presence of a vampire.

Since no one has ever seen Dracula, Trevor assumes that the blond-haired, golden-eyed vampire is Dracula, but the man doesn’t seem to deny it right away. He identifies Trevor as a Belmont and they trade antagonistic words little back and forth. The vampire wonders if Trevor cares about what is happening in Wallachia, and Trevor finally admits that he does.

The answer seems to please both the vampire and Sypha, but despite the “friendly” discussion, Trevor knows he must take care of the vampire. The vampire accepts the challenge and they engage in an intense fight. As they trade blow for blows it seems that Trevor is as skilled as we expect him to be, but the vampire is a challenge.

Eventually the vampire is able to disarm Trevor and punches him in the face, sending him flying back. Pouncing on Trevor, the vampire asks him if he has a God to pray to, but what he vampire doesn’t know is that Trevor has used what is left of his blade to stab him in the chest. The vampire reminds Trevor that he can still kill him, but Trevor calmly states, “But I don’t care. Killing you was the point. Living through it was just a luxury.”

The vampire starts to laugh, and from behind him Sypha gets a fire spell ready. The vampire, seemingly impressed with Sypha and Trevor, disengages and heals himself. He introduces himself as Adrian Tepes, or Alucard (James Callis), the son of Vlad Dracula Tepes.

Alucard explains that he has been sleeping under Gresit for a year while he healed from the wounds his father dealt him. We also get the remaining piece of the Sleeping Warrior legend, that the warrior would be met by a hunter and a scholar.  Alucard, therefore, needs Trevor and Sypha’s help to defeat Dracula.

Together, the three of them begin their quest to save Wallachia.