The second episode of Castlevania ended with Trevor Belmont finding some a sliver of humanity and going down into the catacombs to find the Elder’s grandchild. In the third episode, we’ll find out if the Sleeping Warrior is real and what will become of the people of Gresit.

When Trevor arrives at the catacombs, he finds that there is no way down to the lower levels. But a trick of the light reveals a hidden entrance. Falling through the small opening and down into the lower depths of the catacombs, Trevor is amused by his cat-like reflexes. It isn’t long before the ground underneath him gives way, sending him into the very lower levels of the burial chambers.

Once down there, he sees that there is electricity and something has powered the lights up. Illuminating the dark corridor before him, he sees a few stone statues in his way, including one of a Speaker. He then hears heavy footsteps behind him and out from the shadows a cyclops appears. Opening fire on Trevor with its powerful eye, Trevor makes a mad dash for cover. “Stone-eyed cyclops. Right out of the family bestiary. God sh*ts in my dinner once again,” Trevor exclaims. 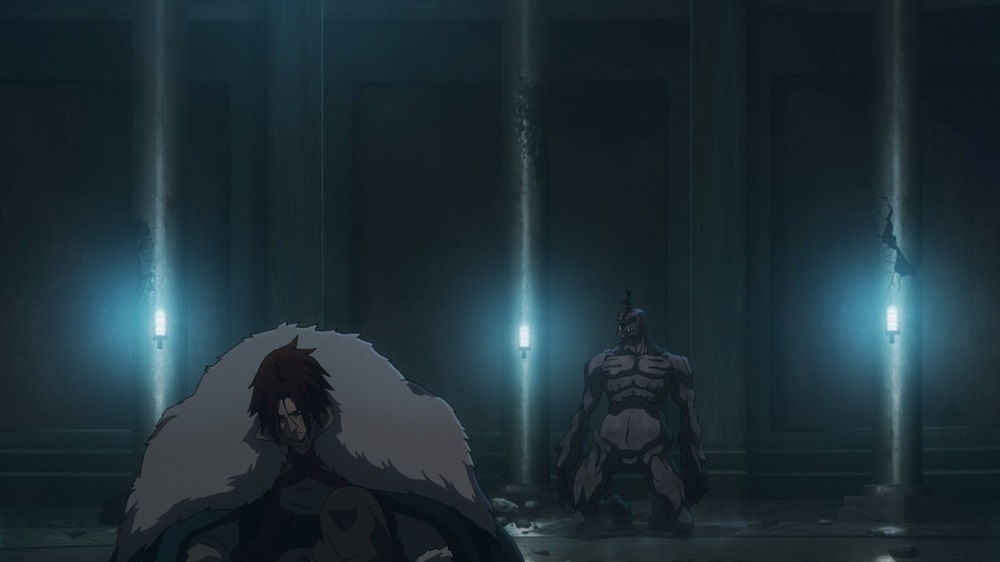 Looking for a way out, Trevor is able to hide behind the large stone columns. Getting a good shot of the cyclops, Trevor throws his short sword, striking the cyclops in the chest. Hoping to see the cyclops fall, Trevor is understandably frustrated when the creator continues it barrage. Taking out his whip, he uses it to get his sword back. In a series of fancy leaps and twists, Trevor gains high ground and kicks the sword, sending it square into the cyclops’s head, killing it instantly.

With the cyclops dead, the stone spell is broken and the Speaker is freed of the effects. Thinking that he was there to save a male Speaker, Trevor is a little surprised to see that “he” is actually a “she.”

Trevor tries to escort the woman out of the catacomb, but she insists on finding the Sleeping Warrior. Believing that there is no such thing, Trevor tells her that he was sent by her grandfather and that the only way the Speakers will get out of Gresit safely is if she goes with him. Although reluctant to abandon her search, she agrees and introduces herself as Sypha Belnades (Alejandra Reynoso). As per usual, Trevor doesn’t care who she is.

Arriving back at the Speakers’ house, the Elder is happy to see that his granddaughter is alive and well. She apologizes for not being able to find the Sleeper, but she is willing to try again. Trevor warns her against it because he believes that the catacombs are not only a death trap, but a creation of Dracula himself.

Trevor intends on leaving the Speakers, but the Elder begs him to stay. Knowing that the Speakers promised to leave by sundown, Trevor agrees to return, but only after he finds some beer.

Before he can find a tavern, Trevor is ambushed by the Clergymen he fought earlier that day but they come bearing a meeting request from the Bishop. Trevor reminds them that he has been excommunicated but seeing that it is the Bishop who ordered the meeting, exceptions are being made. 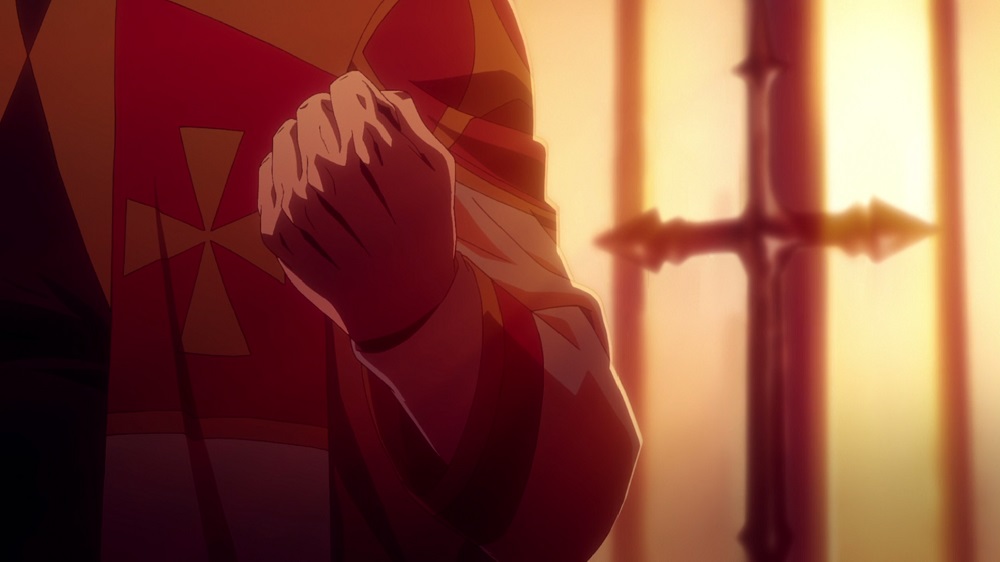 Trevor enters the church where he is met by the Bishop. Their meeting is contentious, with the Bishop assuming the moral high ground against the heretic Belmont. While we knew that the Bishop would stop at nothing to rid the lands of evil, it is clear that his piety is something closer to religious obsession. He believes that the demon horde attacks are punishment for the Speakers’ and the townspeople’s lack of religious faith therefore he must rid the lands of the Speakers.

Trevor is dumbfounded by the Bishop’s claims and assumes that he will be next to be punished. The Bishop, surprisingly, wants nothing to do with Trevor, he just wants him out of the city. If Trevor fails to leave, he could very well undo everything that the Bishop is trying to accomplish.

With his back against the wall, Trevor agrees to the terms and leaves the Church. The Bishop, now reveling in his small victory, makes one incredibly alarming claim: “Targoviste is gone. The other great cities are lost or losing. Gresit will be the last major city in Wallachia. To all intents and purposes, I will be the church.”

Back with the Speakers, Trevor tells them what the Bishop is planning. Despite their imminent death, the Elder refuses to leave. When Trevor presses them, Sypha and the Elder double down. The Elder responds, “Although battles are won and lost, there is a larger war at stake…A war for the soul of our people.” Sypha tells Trevor to leave, and as he stands by the door, something compels him to stay.

As the sun begins to set, the demon horde begins their approach on the town. Meanwhile, the townspeople are gathering their torches and pitchforks.

Once the townspeople arrive at the Speakers’s home, the Clergymen enter and find Trevor alone in the house. The Speakers, now safe in the catacombs with the cyclops corpse, can only wait. 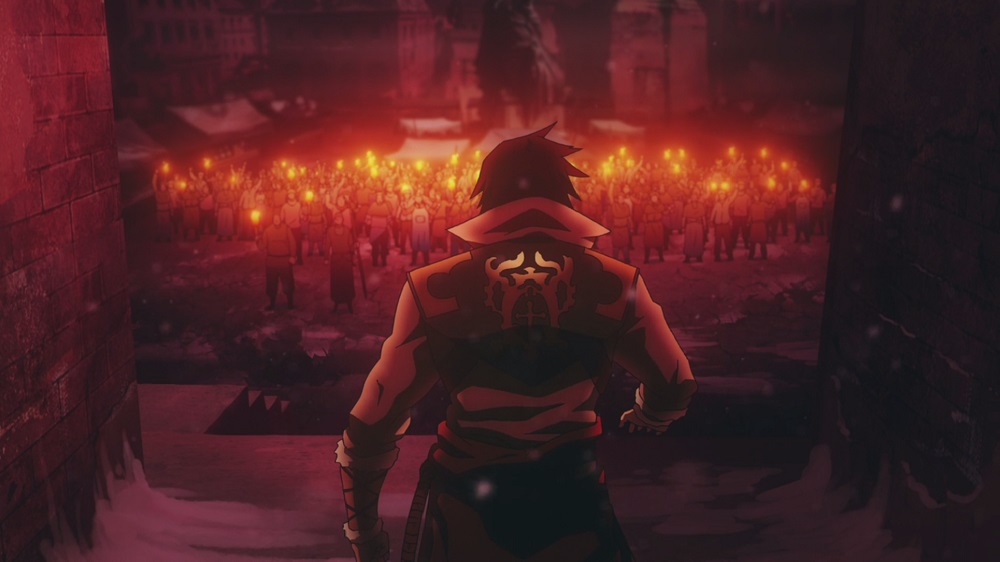 The head Clergyman confronts Trevor and demands to know where the Speakers are, but Trevor refuses to betray them. “My family, the family you demonized and excommunicated, has fought and died through generations for this country. We do this thing for Wallachia and her people.” As he speaks, he sheds his ratty cloak and shows them all his family crest. The transformation is quick and with a renewed sense of purpose, Trevor initiates his grand plan to take out the Clergymen.

With unmatched deftness, he dispatches the Clergymen and avoids the angry mob. Making his way to an alleyway, he stops one more group of men, but a bombardment of arrows stops his progress.

One of the men he fought before approaches him, but Trevor is able to use him as a human shield against the archers. Quickly taking out another man and the two archers on the walls, Trevor makes his escape.

Running out of the alleyway, he finds the angry mob waiting for him. As Trevor runs through the town we see the demon monstrosities flying over the city.