Magic is the name of the game, and the residents of Greendale know a thing or two about magical phenomena. Netflix’s Chilling Adventures of Sabrina is slated to debut its fourth and final installment in December. The Roberto Aguirre-Sacasa (Riverdale) horror series was only released into the wild two years ago, but the show has skyrocketed its leads to astronomical heights. Chilling Adventures of Sabrina has also garnered a loyal fanbase in the process.

Recently, I had the privilege of participating in a virtual roundtable discussion with stars Kiernan Shipka, Gavin Leatherwood, Jaz Sinclair and Lachlan Watson. Said roundtable was broken into two segments: Shipka and Leatherwood were paired for the first interview while Sinclair and Watson took center stage in the second discussion.

For those unfamiliar with roundtable interviews, they’re comprised of multiple journalists from different outlets. They usually run about 15 minutes. Each journalist is granted at least one question. However, it’s not uncommon to get the opportunity to ask talent two or three questions, time permitting.

RELATED: First Look At the Final Chapter of Chilling Adventures of Sabrina

Now, my first Chilling Adventures of Sabrina roundtable was with Kiernan Shipka (Sabrina) and Gavin Leatherwood (Nick). Both were devastatingly charming and nothing but warm to everyone present. I was able to ask two questions for this interview. My first query was for Leatherwood regarding his performance in Part Three. If you recall, Nick became a fleshy prison for Lucifer after Sabrina brought him back from Hell. Even after extricating himself from Lucifer, Nick grappled with the aftereffects of a traumatic event. He clearly had PTSD. I asked Leatherwood how he emotionally and mentally prepared to convey Nick’s fractured state on screen. Leatherwood provided a thoughtful, in-depth answer.

Yeah, he was totally in an emotional pretzel. That’s where we see him right at the start in there. I think just with anything you want to bring truth to the character as best as you can or at least take a good strong stab at that. So, I really just focused on some level of empathy to have with the character, from my intellect and to read the context clues of the character. What they’d been through and just spent a lot of time sitting with what those kinds of experiences might do to someone’s psyche in general.

Then, doing everything I possibly can in my personal life to remain as free in the moment on the sets where certain scenes call for that kind of display of trauma or what have you. I truly think that if there’s anything that you’re holding onto personally as an actor or as a human, it’s going to somehow manifest in your character. So you have to show up free and ready to play. You want to be a pit bull, not a poodle.

Shipka teased that poodles are quite intelligent, which led to Leatherwood revising the ending of his statement. Be a poodle, folks! Grab life by the horns poodle-style!

My second question was for Shipka. I asked her if she had any advice to impart Sabrina regarding the onset of Part Four. Shipka proffered a very humble response.

Oh my goodness. Gosh, I don’t even know. “Hold your damn horses”? It’s funny because I don’t think I would have that much advice for Sabrina. I feel like I learned more from Sabrina, if anything, just in the way that she carried herself. So, no, this story, as amazing as it is, I don’t think I would even care to touch it.

Next, I was led into a virtual room with Lachlan Watson (Theo) and Jaz Sinclair (Roz). Just like their respective castmates, both actors were immensely warm and full of vivid insight. Because this interview ran over 15 minutes, I was only allowed one question this go-round. This time, I directed my query to both Sinclair and Watson. I asked them about their most challenging scenes to film out of all four parts. Watson went first. They gave a wonderfully intricate answer.

They were all uniquely challenging in their own ways. I mean, some of them were really hard because you had to deal with having to learn so many lines after doing a night shoot until 5:00 A.M. the night before and having to show up and be really prepared and ready and have your A game. Then, there were other scenes that were challenging in an emotional way. Theo cried a lot. So, that was always kind of challenging. And there were love scenes that were really uniquely challenging. That specific brand of vulnerability that I haven’t really had to dive into as an actor.

So, that was really challenging. I mean, there’s so many different things that I think challenged us all that it was almost its own little eldritch terror where it felt like Roberto [Aguirre-Sacasa] kind of saw where we needed a little bit of confidence or where we needed a little bit of a boost. It was just this subtle psychological thing where I really learned a lot of what I needed to learn, whether it was purposeful or not. So I feel really grateful for the challenging scenes. Just as much as the easy and fun ones.

Sinclair was up next. Like Watson, she also gave an in-depth response. She pulled back the curtain on some Chilling Adventures of Sabrina magic.

I’d say for two very different reasons, one of the most challenging scenes was Sabrina … was it her coronation when she becomes the Queen of Hell? When we were in Hell and just the three (Watson, Sinclair and Ross Lynch) of us were lined up there. It was a big scene. Just really big; lots of words.

And the Fright Club didn’t do sh*t all day. So standing there and staying engaged in such a long scene when you’re just standing there in this little room and you’re at 12-14 hour days. It was the whole day, that scene. I was particularly antsy that day. So that was tough.

Then, for a completely different reason, playing blind was really difficult. Just because I wanted to do it justice, and it’s vulnerable and uncomfortable. You rely on your eyeballs so much as an actor, for freedom and presence and choices and risks and stuff, and having to take that away and still try to be present. When you’re not focusing on your eyeballs, there’s a certain kind of naked feeling when there’s a camera on you. That was really challenging as well.

We were also privy to some Part Four goodness amid these roundtable interviews. Apparently, the gang will be undergoing a The Sound of Music-esque moment. One journalist asked Shipka how she approached that particular scene, wherein she was battling an eldritch terror while singing a song from The Sound of Music, as one does.

It’s interesting because, when you read a scene like that on paper, you don’t know what level they want. You don’t know what level of demonic possession being summoned out of you whilst singing Sound of Music they want. You kind of just show up with blind faith on the day and luckily I had my lovely scene partner, Gavin, there. And Chance [Perdomo] as well, to really just trudge through that scene.

I had so much fun though. It was funny. It was one of those times where I could really channel all of my tired exhaustion-like feelings and just apply it to a scene. But I had a lot of fun. I like that song, too.

Leatherwood also weighed in with his experience.

Yeah, and like with anything, you look for the truth in it, you know what I mean? Like with that moment, it can very easily lean into being really goofy. But I feel like something that we were able to conjure up in that scene was just, or at least an attempt at, finding the truthful sincerity in what that song really means to Sabrina and kind of stepping back into that role of a partner that Nick can be for Sabrina now and then. So, it was fun. It was fun singing that one.

Leatherwood also commented on injecting some levity into poor old Nick Scratch for Part Four. Shipka felt that Sabrina’s bravery is at an all-time high for the final outing and worked to convey that as clearly as possible on screen. Sinclair also teased a scene in Part Four that personally elated her. Said scene involves Mambo Marie (Skye P. Marshall) … and that’s all I’ll say on that. Spoilers, sweeties! Watson regaled us with a behind-the-scenes tale regarding another certain spoiler I won’t reveal. This scene will be a heavy one, folks. Let’s just say you may need to have a tissue box on hand. 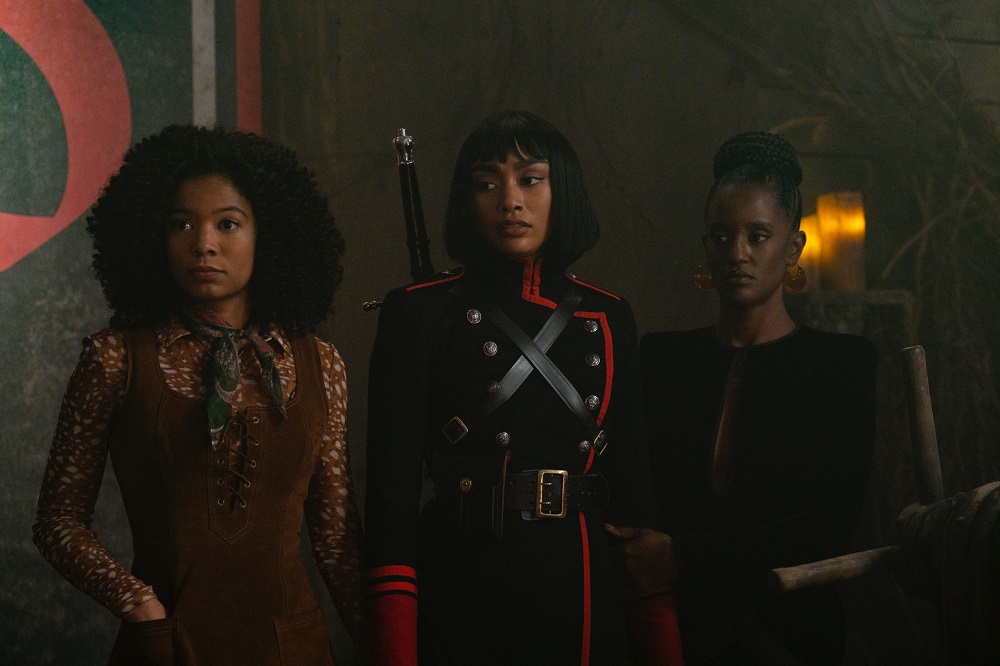 The final installment of Chilling Adventures of Sabrina will fly to your screens December 31, only on Netflix.

This article was originally published on 11/2/20