The Case for Gwendoline Christie to Be the 13th Doctor 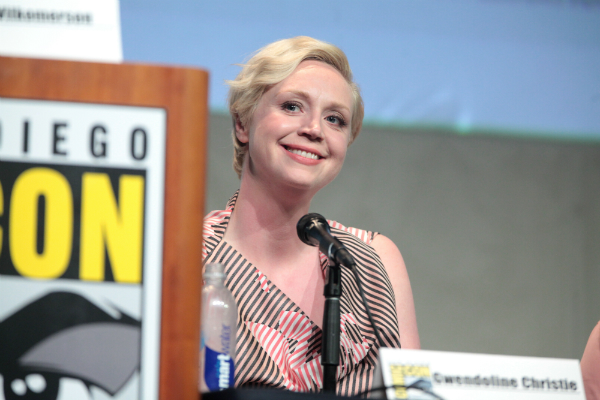 The internet scuttlebutt is that Kris Marshall has already been cast as the 13th Doctor, and I’m crossing my fingers that it isn’t true. The Mirror reported today that their source said both, “They won’t risk a woman Doctor,” and, “They want a David Tennant type.” YAWN. Like we need another bumbling white guy in this role. Wouldn’t it be more fun to see the new Doctor struggle with a significant change in physicality?

I have a few ideas for how this could happen. If it has to be another guy, I’d love for the new Doctor to be a PHYSICAL Doctor– think Jason Momoa or The Rock, but British. Wouldn’t it be fun to watch him bump into things in the TARDIS and not know his own strength? Or what if the Doctor was Asian or black? How would the racial and/or cultural expectations other Earthlings have of non-white people affect the Doctor’s adventures? Or what if the Doctor was a woman? And what if that woman was a badass?

One of the strongest arguments for Kris Marshall having been cast is that he’s left his role on Death in Paradise at the end of the current season. You know who else will soon be unemployed? The entire cast of Game of Thrones. And if I were to pluck one person from Westeros and plop him or her into the TARDIS, it would be Gwendoline Christie without hesitation.

My desire to see the Doctor struggle with not knowing “his” own strength would work with her. She’s been wielding a sword and fighting for years. She could channel her inner brute in an interesting conflict between the Doctor’s pacifist desires and the ease with which she could smash any opponent with her fists.

Wouldn’t it be interesting to see a person who has lived as a man for hundreds of years move through Earth society as a six-foot, three-inch tall woman? How would that change what the Doctor does and how s/he’s able to do it? What new obstacles would she face, and how would the Doctor face them? If Capaldi‘s Doctor doesn’t notice people’s tears, and we forgive that because it’s not an atypical thing for a hero dude onscreen, how would we feel if it were a woman who were so emotionally illiterate?

Listen: if the Doctor’s new companion can be a black lesbian, doesn’t it stand to reason that the Doctor might subconsciously be considering some new options for the next regeneration? If we believe that each regeneration is a reaction to some element of his last one– like becoming a craggy old dude to help squash Clara’s crush on the youngster with a penchant for snappy dressing– doesn’t it make sense that the next iteration of this nearly immortal being could be very DIFFERENT?

I have another woman contender in mind, and I’ll address her separately. I also have some men of color I’d like to see considered. If Charlie Hunnam or Daniel Craig would take the role, just to make the next Doctor an intensely physical person whose shirt gets ripped a lot, I could get on board for it being another white dude. But I feel like we can do better than finding another gangly white man who’s always getting in his own way. Come on, BBC. Aim higher!

In #TheBadBatch's second episode, the group finds themselves on the run and they seek out help from an old friend. Check out our recap to stay up to date on the action!