Captain America Turns 75 This Year And Marvel Celebrated with a Giant Bronze Statue!

Captain America turns 75 this year and, in honor of that, Marvel commissioned Comicave Studios to create this 13-foot tall bronze statue to celebrate that legacy. According to a report from Entertainment Weekly, We will get a chance to see Marvel’s enshrined Sentinel of Liberty at San Diego Comic Con this week, and then It will be moved to the Sunset Park neighborhood in Brooklyn, where Steve Rogers was born and raised. It should be noted that this statue is more based on Chris Evans‘ portrayal of the character than it is directly out of the comics.

But before he arrived at his final resting place, the statue will go to Prospect Park on August 10th, where he’ll be dedicated in a special ceremony followed by a screening of Captain America: Civil War. From here, in September the one ton statue will be uninstalled and moved to the Barclays Center until October, when it’s finally moved to its final resting place in Sunset Park.

The statue, which you can below, bears the famous quote from Chris Evans in his Captain America films, “I’m just a kid from Brooklyn.” 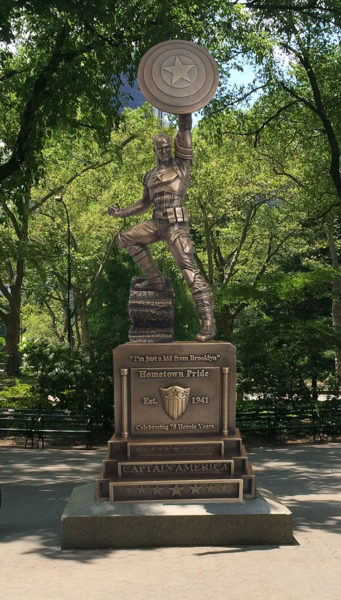 Molly and Brendan attend a party at Bitsy's hotel while Owen seeks to remedy a botched marriage proposal on this week's episode of Central Park. Check out our recap! https://www.geekgirlauthority.com/central-park-a-decent-proposal/

In Masters of the Universe: Revelation's final episode of part one, Teela and the team head to Preternia and a familiar face warns them there is no escape. https://www.geekgirlauthority.com/masters-of-the-universe-revelation-the-forge-at-the-forest-of-forever-recap/

In episode four of Masters of the Universe: Revelation, Land of the Dead, Teela and the group head to Subternia and face off against Scare Glow. https://www.geekgirlauthority.com/masters-of-the-universe-revelation-land-of-the-dead-recap/

In episode three of Netflix's Masters of the Universe: Revelation, Teela heads out to find Man-At-Arms, the most dangerous man in Eternia. https://www.geekgirlauthority.com/masters-of-the-universe-revelation-the-most-dangerous-man-in-eternia-recap/