But that is old news and definitely not the news from this title! The real news here is that Captain America reveals that he has been a Hydra agent deep undercover this entire time. 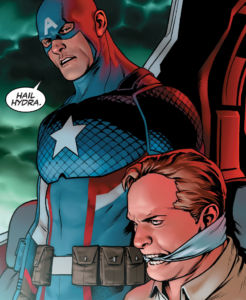 It seems unlikely that Marvel would say yes to this story without a redemptive endgame in mind, but until then, we’ve got this tweet from Chris Evans to act as a reaction for all of our sakes.

The fan outrage has been very real, but we here at Geek Girl Authority would like to take this moment to remind everyone that Captain America has relinquished his mantle more than a few times, has turned his back on the government to become Nomad. 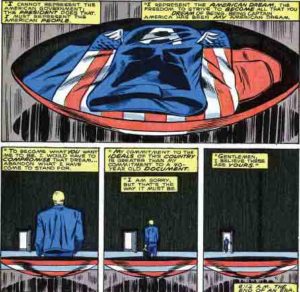 He was killed by Crossbones, was on the wrong side of history for the right reasons and was an old man without super soldier serum — none of these things have stuck to him and neither will this. The fact of the matter is that comics are always moving forward, always changing and are defined by how mutable they can be. 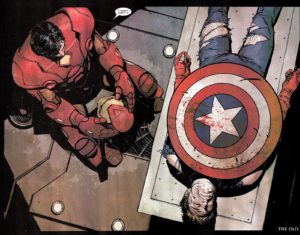 And they absolutely have to be! This is long form story-telling — a 75 year history is going to require some strange, creative twists and turns.

So we urge everyone to exercise caution in reacting with such exceptional negativity. Does it feel like a betrayal of the character and his history? Yes. Is it absolutely ludicrous on infinite levels? Yes. But it has us all passionately defending our Sentinel of Liberty and it absolutely will not stick. Because these sorts of things somehow never do.