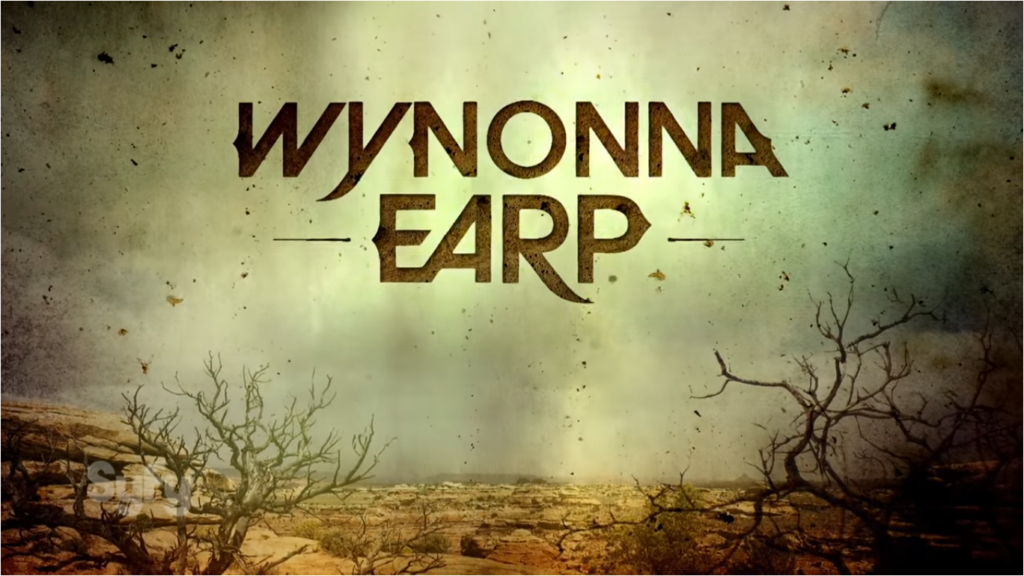 On Friday, Wynonna Earp cast and writers attended Chicago Comic & Entertainment Expo (C2E2). Emily Andras (writer, Wynonna Earp) sat between Shamier Anderson (Agent Dolls) and Tim Rozon (Doc Holliday) on the Wynonna Earp panel sponsored by IDW Publishing. With Season 2 premiering on Syfy on June 9th, this was a way for fans to try to get a little information on the upcoming season.

Normally, I wait for the news from these kinds of things to come out before I pay attention – if I don’t all out ignore them to avoid potential spoilers! But this panel? I had to find a way to stream the panel after realizing what I thought was a random tweet from Kat Barrell (Officer Haught) was actually a picture of Rozon with a new cast member, Varun Saranga.

Luckily for me, C2E2 was streaming their panels on Twitch. I was able to stream on my phone and at least listen in as I went about the rest of my work day. There were also a few Periscopes going for later reference for note taking!

Saranga, the mystery man, sat between Rozon and Brendon Yorke (Wynonna Earp writer and Andras’ husband). I took this as a good sign and that there would be information disseminated about his involvement with the show!

Starting with a Bang
The hour-long panel got started with a quick showing of the Season 2 trailer, which I somehow missed when it dropped last week! Take a quick peek for yourself here:

It was revealed during the panel that the teaser was created as an inside marketing video for potential advertisers. It was so loved that it became the actual trailer without any additional editing, which is why there are Season 1 scenes sprinkled throughout.

“As Loose as Wynonna After Six Shots of Whiskey . . .”
Although organizers were advised that there would be little to no questions allowed for Season 2 because it just wrapped, a bribe of a bottle of Kentucky bourbon was passed down for the panel to enjoy after the trailer. Did it work? Well, kind of.

We learned what everyone was up to between Season 1 and Season 2: Anderson worked a film with Johnny Depp (LAbrynth) and Rozon worked with Wynonna Earp creator Beau Smith on a new comic book set before the television show, presumably showing her troubled youthful incidents that resulted in her sealed juvenile record (the original comic book that inspired the show was set after years of Wynonna working for the US government whereas the television show is her inheriting the Earp curse and being introduced to the Black Badge division of the US Marshals).

“I Can Say a Little Bit . . . It Was the Most Fun I’ve Ever Had!”
The next question, the first question about Season 2, was directed at Saranga and he spilled some of the beans on his character! What we learned? Jeremy wears a lab coat and works with Black Badge. Saranga also casually mentioned returning in the event the show moves on to Season 3. This just raises so many questions! Is he the guy that created the drug Agent Dolls uses? Is he the trusted source Agent Dolls uses to confirm Willa’s identity in Season 1? Or is he someone completely new? Was the lab coat a one off costume item that is mentioned to throw us off? Season 2’s June 9th premiere can’t get here fast enough!

The Mystery of Doc’s Missing ’Stache
Rozon arrived to C2E2 with a bare, clean shaven face. He was asked if his missing mustache, a Doc Holliday signature facial accessory, would be making appearance at the convention. It was joked that it had missed its flight and been turned away at the US border. He then revealed that his current project (no details given) did not allow for the facial hair and that is was not shaved off at any point for Season 2. Yorke then made it known that for the next ten years, Rozon will be traveling with the famous and glorious mustache on his recently renewed passport!

Agent Dolls and His Yellow Eyes
Anderson addressed the very bright and menacing eyes he sports in the trailer. He claims he doesn’t do contacts because he’s, in his own words, “a big baby”, and he hopes the fans appreciate his fear and pain suffered for “Lizard-Dolls” because he had to wear the yellow contacts quite a bit. I’m hoping this also includes finally revealing what he is: is he part-demon? Some government super-soldier? What is the drug he is shown to have withdrawals from? Is it keeping the non-human side at bay? Is it somehow keeping him in human form? There are so many questions!

Panel Members’ Favorite Moment from the Trailer
Moving the discussion along, the moderator asked the panel what part of the trailer was their favorite. In my opinion, this was a backdoor question into what to expect in Season 2. The answers were cryptic where potential spoilers would be, though. Anderson’s favorite is Dominique Provost-Chalkley (Waverly Earp) dancing in the cheerleader outfit; he admitted it turned him on a little and hoped that Andras would write more Wavery cheerleader, or dancing in general, scenes if they progress to a third season. Andras and Rozon share the same favorite moment: the Earp sisters walking in slow motion “covered in some sort of viscous goo.” Andras says she chose this moment just because she wanted to say “viscous” and Rozon because the related picture that leaked to the internet just shows Wynonna so fierce. Saranga’s favorite scene? The same as mine: Doc in the shower! Yorke simply liked when everyone was running: “you get a sense of action…and anticipation…of what they’re running from or what they’re running to.” 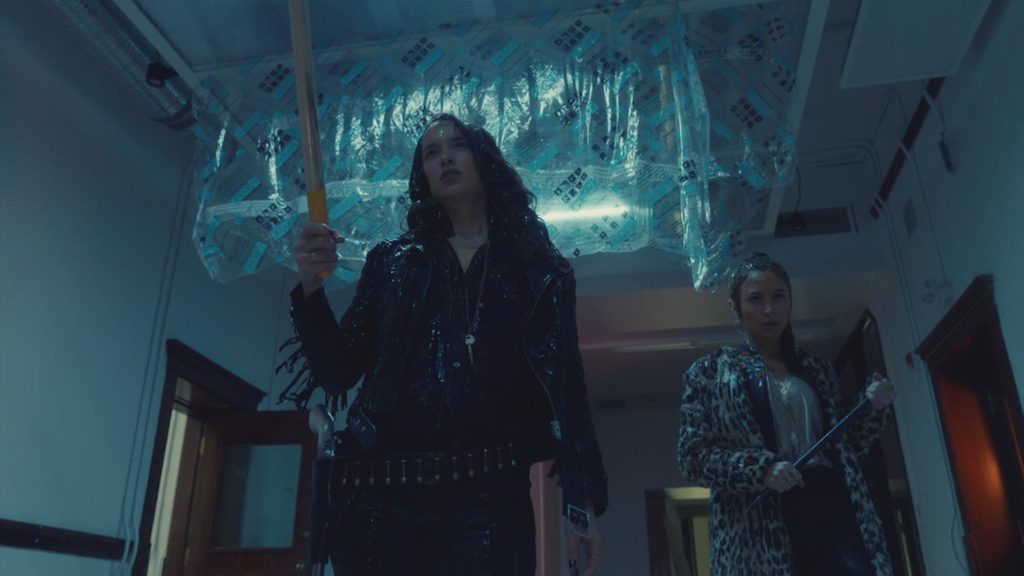 The Earper Fandom loves the show for its unabashed LGBT+ representation. Andras feels the show is doing justice to the LGBT+ community and Season 2 is promised to continue this and add more. How much more? We will have to wait and see.

When asked if Wynonna would be willing to bring the first major poly-amorous relationship to the small screen, possibly between Wynonna and “two gentlemen,” Andras answered, “Maybe.”

What was something writers wanted but did not make it into Season 2?
Very enthusiastically, Andras answered, “Flame thrower battle!” before calming down and expanding with “more action” to put the stunt choreographers to work more. Most of the stunts are done by the main actors, though stunt doubles do help out with the more difficult shots. Yorke agreed with Adras’ statement of “more action”.

Are the comics and the show cannon together?
In short: No.

The long explanation: Andras and Smith respect each other too much to limit the other with the gritty details. Andras does not want the fans to get so nit-picky that they realize, as a hypothetical example, Waverly’s birthday is one day in the comic books but two days later in the television show, and start an uproar campaign. As a result, she would prefer everyone look to the two mediums as two different universes that parallel each other. However, the two writers do talk and discuss the broad details, so that, as she says, one version of Agent Dolls will never be evil while the other is not. (Is this a hint at Season 2??)

“If you could have any TV fictional character join Wynonna Earp, who would it be?”
Anderson emphatically requested Jason David Frank, the original Green Power Ranger. Andras admitted Sigourney Weaver could show up and do whatever she wanted, but she also feels Buffy or Faith (both from Buffy the Vampire Slayer) would fit in well in the Wynonna universe. Rozon mentions his ideal casting of Schitt’s Creek star Emily Hampshire as Doc’s wife.

Other Tidbits
There was more discussed, but maybe it was mentioned in passing or quickly covered and therefore not in need of its own full paragraph. If you feel I need to pay more full attention to any of these in the future, please let me know and I will!