I had the pleasure of playing The Legend of Zelda: Breath of the Wild last year at E3, and I was BEYOND excited when the game’s release date was announced along with the Nintendo Switch. Towards the end of February, as I anxiously waited for March 3rd, I saw images such as the picture above popping up across the web.

Wow. That’s a LOT of perfect scores. How could one game achieve SO MANY perfect scores? Could an open world Zelda game be THAT good? Had another Zelda game come close to the perfection of Ocarina of Time? To answer these questions, I’ve highlighted the elements that I thought earned Breath of the Wild a 10/10.

Arguably, one of the most important elements of an open-world game is its setting. In order to be a successful game, the setting needs to be expansive and engaging enough for the player to want to explore. This is one of Breath of the Wild‘s strengths. All throughout the expanse of Hyrule, you can explore a variety of locations including the blazing Gerudo desert, the rain-ridden Zora’s Domain, the fiery Death Mountain, the snowy peaks of Mount Lanayru, and so much more.

Additionally, all of these areas are incredibly detailed – from weathered structures and overgrown dismantled guardians in the Great Plateau, to the etherial ambience of the Great Fairy Fountains. What makes an open world game successful is the feeling of exploring a fleshed out WORLD. The team behind the game beautifully executed that. 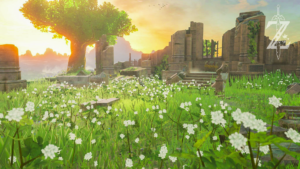 Breath of the Wild has a a gentle and melancholy score, which is perfect for exploring the vast landscapes of Hyrule. This score thematically matches the despondent mood of Link returning to a world that he was unable to save. The brilliance of the sound design appears in the gentle piano soundscapes that suddenly change to a quick staccato pace when enemies engage in combat.

Moreover, the game’s score supplements its open world aspect with each location incorporating its own regional specific music. Bells underline the Zora’s Domain’s theme, while the accordion highlights the Rito Village tune. These location-distinct melodies create a different atmosphere for the area, but still connect to the overall gentle and mystical theme of the game.

Finally, the game incorporates classic Zelda songs and tunes for that traditional Legend of Zelda feel. From the chest opening ditty, to even Epona’s song, your favorite Legend of Zelda melodies remain remastered and reworked into the score in a refreshing way. All of these elements combine to create the unique and magical score for the game.

In becoming an open world game, there were some mechanics of the original Legend of Zelda games that had to be reworked in order to match it’s new epic scope. Temples are a cornerstone in the Legend of Zelda formula, and in Breath of the Wild, the temples were allocated into Shrines and Divine Beasts. Shrines appear all across Hyrule, which provide the player with a quick specific challenge, or task. The Divine Beasts are much more in the vein of traditional temples, as they are locations with a variety of puzzles and foes. 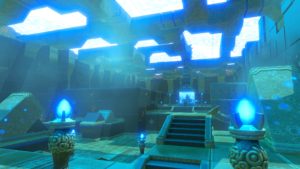 Additionally, the game added two new game mechanics that many other open world games utilize: Crafting & Weapon Durability. Crafting not only enables the player to create food and elixirs that aid Link in a variety of ways, but it also grants a greater purpose to the open realm of Hyrule. If you REALLY want to make a Fruit Cake (Princess Zelda’s favorite), you have to travel to eastern Hyrule to specifically find Tabantha Wheat. Specific items in specific areas of an expansive game give the player another reason to traverse the open world before them.

Weapon durability adds another level of difficulty to the game. Weapons will break, so it’s important to keep defeating enemies, claiming their weapons, and building up your storage by finding Korok Seeds (see how that all cohesively works together?). The Champion’s Weapons are strong weapons (besides the Master Sword) that you can obtain throughout the game. However, these weapons have limited durability as well, and are tricky to repair if you break them.

The creators behind Breath of the Wild truly embraced the idea of “open world” the lore. The game really stresses that Link, Zelda, and Ganon’s battle is one that has existed since the beginning of time. Impa even explains, “with the passage of time, each conflict faded into legend” (get it, The LEGEND of Zelda-they’re all connected). In another specific memory, Zelda knights Link and recites, “Whether skyward bound, adrift in time, or steeped in the glowing embers of Twilight”, linking Breath of the Wild to its game predecessors.

The game also includes a huge cast of Legend of Zelda characters. The Korok, the Zora, the Gerudo, the Rito, Impa, and even Beedle appear. And what’s better than ALL of your favorite Zelda characters in ONE GAME? This gives the feel that the game is unified not only in scope, but in nostalgia and story as well. 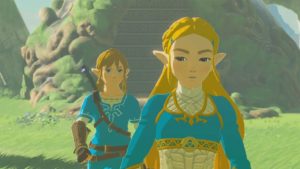 By embracing its heritage and incorporating new elements to create a solid open world game, Breath of the Wild finds that perfect balance of challenge, achievability, and fun. It received perfect scores because it perfectly married nostalgia to innovation, and executed these elements masterfully. It will definitely be a contender, if not the winner, of several video game awards this year! And then what next? What future Legend of Zelda game could possibly follow this one? Have we reached Zelda perfection? Or does Nintendo have more up their sleeve? The Legend of Zelda remains a series that embraces advancement and change, and Breath of the Wild is a successful product of that forward thinking.

The Legend of Zelda: Breath of the Wild is available on the Nintendo Switch and Wii U