Book vs Movie: MY FRIEND DAHMER

My Friend Dahmer is a graphic novel and memoir written by John “Derf” Backderf, a former classmate of the American serial killer Jeffrey Dahmer. The book was released in 2012 though Backderf confessed to beginning work on the novel as early as 2002, eight years after Dahmer’s death in prison. It follows the acquaintanceship Backderf and his group of friends developed with a younger Jeffrey Dahmer, his odd-sometimes humorous- habits and how his broken home life may have played a small part in what he would become in the future.

In 2017 My Friend Dahmer was brought to the big screen by writer and director Marc Meyers. Starring former Disney star, Ross Lynch, the film quickly started quite the buzz among true crime fans with some reviews calling the film “A small, slight window into a mixed-up soul, this is more intriguing than engaging. Its restraint, though, is admirable, resulting in a mood-piece with an ongoing sense of unease.” ~Empire

In short, I loved the movie. A lot. But I couldn’t help having a “this didn’t happen in the book” moment. So I thought it would be fun to explore the biggest changes I noticed. This is your official spoiler warning.

In the novel, it’s plainly stated how much of a loner Dahmer was, he rarely interacted with other kids his own age before his senior year and often spent time alone. However the movie portrayed him to be much more social. Sure, he still didn’t have any friends but he wasn’t in total isolation either. He had other activities that he engaged in after school (you know, other than killing small animals) such as tennis, track and field and the school’s marching band. And the kicker? In the film, he appeared to strive in all of them.

Dahmer’s father, Lionel, and younger brother, David, were only seen a handful of times throughout the entire book. Backderf himself even noted that “...His younger brother, Dave, was nearly seven years younger than him. Dave isn’t part of this story. He was just a kid and went beneath my notice. He certainly had a big role in Jeff’s life, but I didn’t witness it.“

As for Lionel, it wasn’t a secret that he and his wife Joyce had many problems. With his parents’ divorce it was no surprise the few ‘friends’ he had over his house never saw much of Lionel. The movie completely flips the notion of the absent father, showing Lionel to be much more involved with his son despite complications; at one point in the film, Lionel even goes on a rampage, destroying the shack in the woods where Jeffrey would kill animals to dissolve their bones in acid, pleading with his son to do something, anything else so he would seem more normal. David not only appeared more in the film, it actually showed the usually stoic Jeffrey being loving and incredibly protective of his little brother from his parents constant bickering. 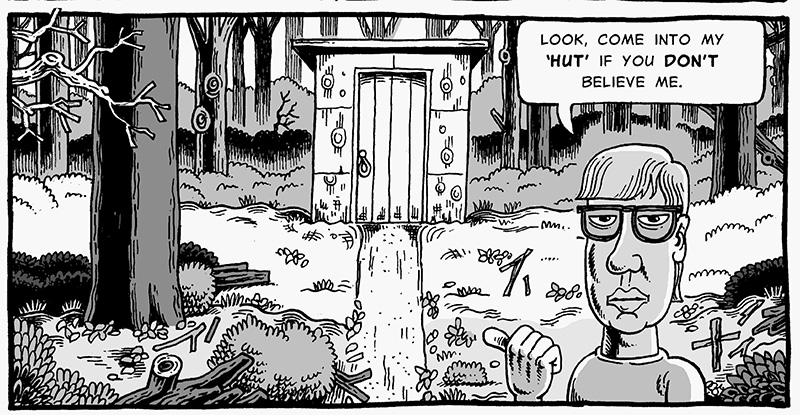 At Revere High School, Dahmer was known for being a little off but he was almost normal in comparison to a character called Lloyd Figg, a student in Dahmer and Backderf’s class that clearly showed signs of being mentally disturbed. Figg was often a general disturbance, picking fights with teachers and other students, screaming gibberish resulting in being the punchline to his classmate’s jokes. Without a doubt, Figg was disturbed though the film grossly exaggerated the boundary of his personality. The movie version of Figg was more feared than made fun of, displaying him as being an utterly deranged individual that carried weapons around. At one point in the film, Dahmer and Figg are shown walking around in the woods, even though Backderf expressed he should stay far away from Figg. Figg begins talking about his troubling home life whilst loading a gun with a single bullet. He attempts to play a game of Russian roulette with Dahmer but the situation was too disturbing to the point where the future serial killer ran away in fear.

As the novel comes to a close, we see that Jeffrey Dahmer has graduated high school, the people he thought were his friends have abandoned him and his parents’ intense divorce leaves Dahmer all alone in his family home. It was probably the worst time of his teenage life. The little world he made for himself was crumbling, leaving him alone with his disturbing fantasies.  In the novel, we find Dahmer walking alone on the side of the road when a friend from school named Mike spots him and offers to drive him home. The chit chat is simple enough, when the two reach the Dahmer household Jeffrey gets out of the car with no fuss. Little did Mike know that the dismembered body of a young hitchhiker, Steven Hicks,  Dahmer had murdered days earlier sat in the trunk of his car. Then it all fades to black. That was the very last time anyone from the “Dahmer Fan Club” saw their fearless leader.

The movie, naturally, put a twist on this because what’s a Jeffrey Dahmer movie without a little excitement? This time around it’s actually Backderf, driving home from picking up his paycheck. He encounters a dazed looking Dahmer on the side of the road. After offering to drive him home the conversation quickly turns intense. Not in the sense that the boys were fighting but that uneasy, haunting feeling that came with Dahmer’s presence worsens. It was as if he was on the verge of snapping.

Once at their destination Dahmer manages to convince his friend to come inside so they could share a beer. The air inside the Dahmer household is eerie and Backderf makes a quick retreat. Dahmer goes after him with a baseball bat, stopping only when he sees his friend get back in his car, insinuating that the author of the book Derf Backderf was close to becoming Dahmer’s first kill.