Home » Stuff We Like » Book Review – A CLOSED AND COMMON ORBIT

Lovelace was once the artificial intelligence in the ship, Wayfarer, constantly tending to the needs of the ship and the crew, while also forming emotional bonds with them. But after the ship was damaged, Lovelace lost her personality because of a reboot and rather than cause the crew further pain, she left the ship in the form of an illegal body kit. Living with Pepper, someone who knows about not fitting in the body you were given, Lovelace struggles to come to terms with her new life and its limitations while still being true to how she feels. 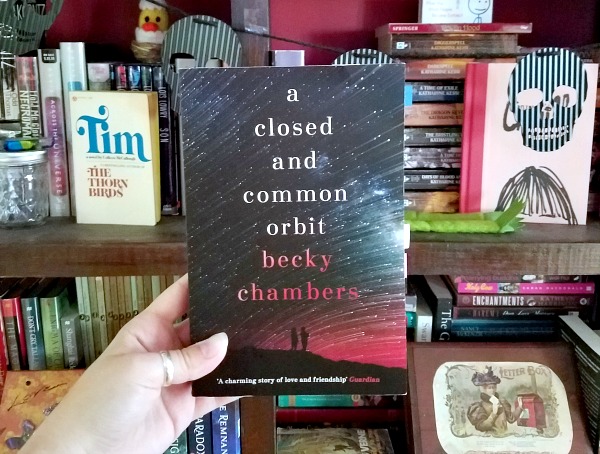 I was so thrilled to be back in the universe Chambers created! I was a little hesitant (though not much because I have faith) about starting this because I thought I would miss the rest of the crew, but I need not have worried. That’s not to say I wouldn’t love to hear more about the rest of the cast from The Long Way to a Small Angry Planet, but I was so wrapped up in Lovelace’s current life and Pepper’s past that I didn’t have time to think about anyone else.

I’m going to call this a sequel to Angry Planet because while you don’t need to have read it first, Common Orbit does take place after the events in Angry Planet and I think it gives the characters even more depth. But, even if you just read Common Orbit, I think you’d find a fantastic story.

Once again, there’s a cast of diverse characters (including an Aeluon who changes physical genders multiple times), but the focus is on Lovelace, now called Sidra, and Pepper. We find out about Pepper’s difficult and heartbreaking past, as well as what makes her so sympathetic to Sidra’s situation and why she believes in AI rights.

As a robot, I naturally find the subject and AI rights and humanity relevant, moving and very important. There are so many good references in this book, but I’ve picked one where Sidra is talking about her memory banks and how she doesn’t have infinite storage in her new body:

Thinking about having to pick and choose which memories or facts or images you’d need to remove from your mind in order to save new information is depressing. I can’t imagine having to make that choice. But that got me thinking, that choice is made for me. There are many things I’ve forgotten as I’ve aged, memories that no amount of photos or stories from friends and families can help me recall. I know a thing happened because maybe there’s a picture, but I have no trace of that memory. Deep shit, bro.

There’s also a fantastic quote about tattoos. This is how I felt about tattoos, I’ve just never had the right words to express it:

I don’t know what else to say without launching into a never-ending discussion about every plot point in this novel. It’s wonderful and sad and engaging and thought-provoking and difficult and then the ending made me feel so, so good. I need another book yesterday.

If you enjoyed Angry Planet you must read Common Orbit. If you haven’t read either, what are you doing with your life!? Please, check out this series and then come chat with me about it!