Thank the Netflix gods, we finally have a Bojack Horseman Season 4! It feels as though we waited a millennia for our favorite inebriated Hollywood horse. Immediately, I commenced my binge session once the coveted fourth season became available. This show always unlocks something within me, whether it’s a repressed memory or a feeling I can readily identify with. Creator Raphael Bob-Waksberg knows how to push the right buttons to make you feel. He’s your daily reminder that you’re not a robot. You’re a messy, emotional human being. Season 4 gave us our typical Bojack Horseman, but times ten. Everything is jacked up tenfold.

Now, this season covered an array of heavy hitters. Depression (always the show’s flagship topic), Alzheimer’s disease, miscarriages, parental relationships. Crumbling marriages, sexuality and even the gun control issue. Bojack (Will Arnett) not only discovers that he has a daughter named Hollyhock (Aparna Nancherla), but his mother Beatrice (Wendie Malick) is stricken with Alzheimer’s. Two for the price of one.

Bojack Horseman takes on Beatrice’s disease in the penultimate episode “Time’s Arrow.” We finally learned of how she met Butterscotch Horseman, Bojack’s father. As her life plays out on screen, we see the “edges” are fraying due to her disease. Someone’s face is blotted out because she doesn’t remember them. Objects in the background shift or break because of how unstable her mental state is. Scenes are unintentionally woven together. It’s a brilliant analysis into how a person’s mind could function when altered by this disease. My grandmother had Alzheimer’s and this season hit very close to home for me, in the best way possible. Bojack Horseman is catharsis personified. 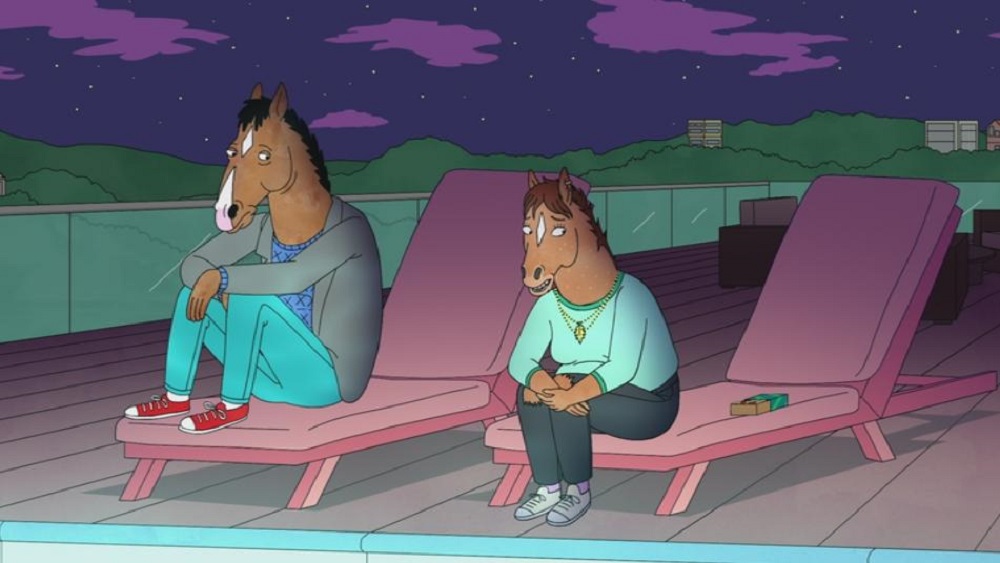 Another standout episode is, hands (or hooves) down, Episode 6. “Stupid Piece of S**t” is Bojack’s inner monologue. His own struggle with depression is given a voice and boy, does it sting. From the moment Bojack opens his eyes to the moment he closes them, we’re privy to his innermost thoughts. His depression is a stream of curses, insulting him at every turn. Calling Bojack a “stupid piece of s**t,” reminding him that he isn’t worthy of love. This episode is a visceral, brutal looking glass for those of us with clinical depression. Never has an episode of this caliber been shown on television.

However, not everything revolved around Bojack this season. Princess Carolyn (Amy Sedaris) is given a meaty story line all her own. After discovering she miscarried, she severs her relationship with Ralph (Raul Esparza). She fires her most trusted assistant Judah (Diedrich Bader). Princess Carolyn begins to spiral out of control. This in itself is shocking, given that she’s typically the rock her friends rely on. Bojack Horseman asks us if career-oriented women are capable of having families. Princess Carolyn was always so focused on her success as a manager. When she shifted her attention to that of starting a family, said potential family was taken away from her. The show doesn’t tiptoe around this topic, nor does it tiptoe around anything this season. 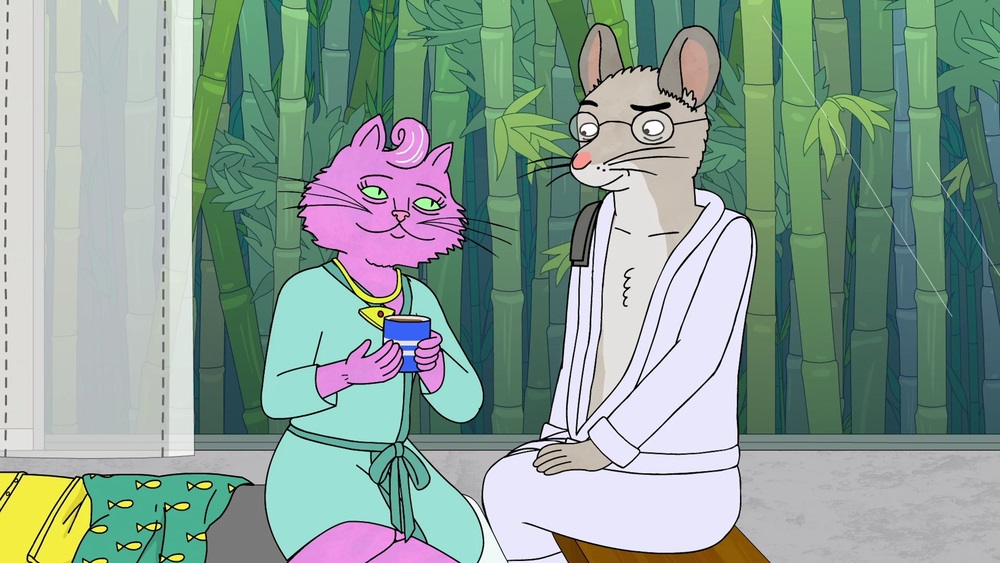 Now, Diane (Alison Brie) is also granted one whopper of an emotional journey. While Mr. Peanutbutter (Paul F. Tompkins) runs for office, Diane begins to question whether this is all she wants out of life. Yes, she’s married to a successful Hollywood star. Yes, she has quite the burgeoning career in journalism. But is that all she needs? Could there be more to explore, more to capture for Diane Nguyen?

In “What Time is it Right Now,” the season finale, Diane confesses to Mr. Peanutbutter that she’s tired of “squinting” so much that their marriage appears to be perfect. That line gutted me. We’re all guilty of “squinting” to make something appear flawless, instead of seeing it for what it really is. We can’t face reality. My heart broke for Diane in that moment.

Even Todd (Aaron Paul) is bequeathed with a heavy topic! Our happy-go-lucky ideas man comes out of the closet as asexual. Now, I have to give Bojack Horseman major kudos. Seldom is asexuality covered in television. They not only handled it gracefully, they made sure Todd was given an adequate support system. He was not shamed for his asexuality, he was embraced. Bojack Horseman just told us all that we need to be more accepting of our fellow humans. They also shed light on asexuality for the less informed. Fear stems from ignorance. 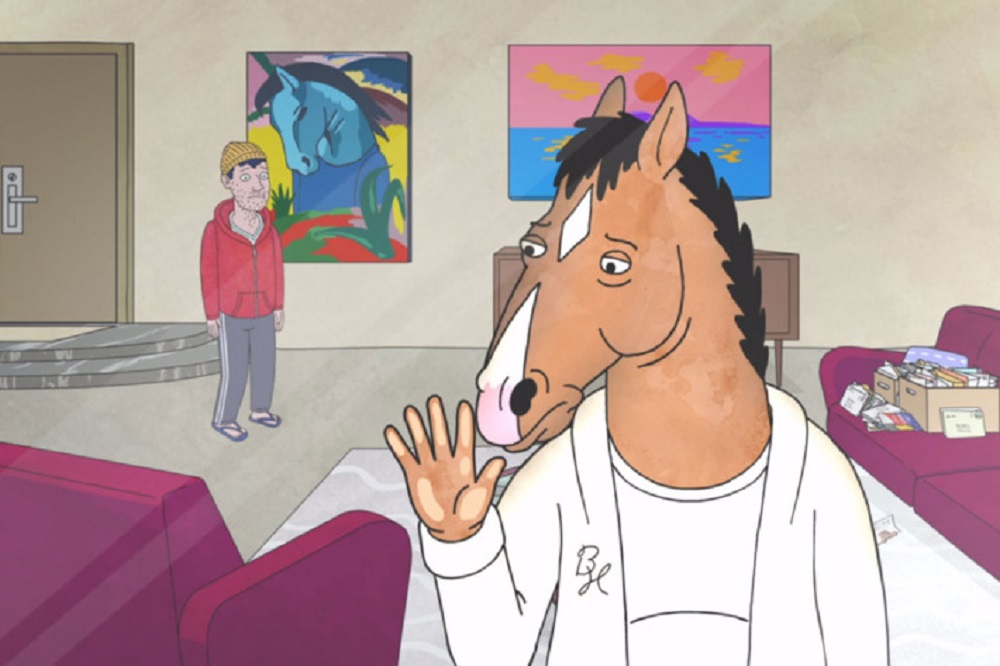 Now, “Thought and Prayers” is yet another stellar episode. Bojack Horseman takes on the gun control issue. A mass shooting creates a PR nightmare for Princess Carolyn’s latest project starring Courtney Portnoy (Sharon Horgan). Said project revolves around a woman who’s a spy, relying heavily on her mastery of guns. Mass shooting after mass shooting rocks the world, creating an increasing amount of setbacks for the film. Everyone involved with the movie continuously mutters “thoughts and prayers.” This is a typical go-to phrase for those reacting to real-life mass shootings.

Then, Bojack Horseman takes the gun control issue even further. Diane pens an article about her own personal experience with guns and how she carries one in her purse. Said article skyrockets to international fame. Diane argues women would feel safer if they possessed such weaponry to deter the predatory male species. Next, we see that more shootings are caused by women. Thus, lawmakers in California ban guns altogether. Once again, this show brazenly puts a hot button issue on display and handles it with aplomb. Bravo.

We see Bojack mature this season as he attempts to handle the massive revelation of having a teenage daughter. Initially, he brushes off Hollyhock, not invested enough to take hold of the parenting reins. However, as time passes, he notices how similar she is to him. Hollyhock’s personal struggle with depression draws him closer to her. When she starts dating a boy, Bojack launches into stern dad mode. Then, when Hollyhock ends up in the hospital after an accidental overdose, Bojack is utterly distraught. Could our favorite Hollywood star be a legitimate father someday? 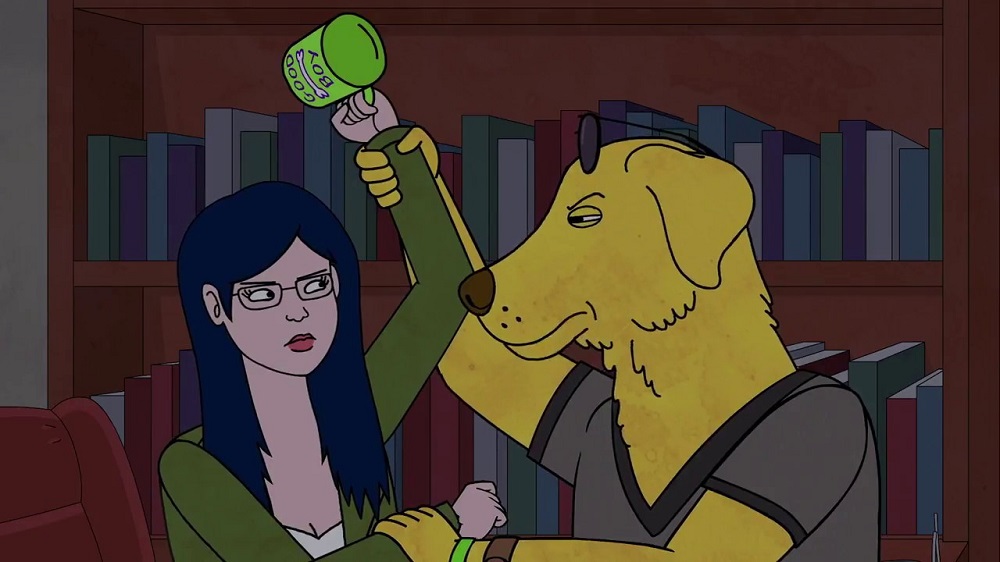 Now, I know this season sounds particularly dark – more so than usual. Well, it is. However, there are plenty of lighthearted moments to counteract the dark. In “Hooray! A Todd Episode!,” our favorite couch surfer Todd is blossoming into a businessman. He conjures up the notion of clown dentists. Now, clowns who perform dentistry or dentists dressed as clowns? Todd decides to try on both for size. My favorite moment of the episode is when Todd inadvertently models for a fashion show. He walks the runway and the fashion world is immediately smitten with his “couch surfer” apparel. Throughout the remainder of the season, we see people in the background dressed like Todd. You know, the red hoodie, yellow beanie, gray sweatpants and blue flip-flops. Genius little details like that make my heart swell.

Mr. Peanutbutter also provides moments of levity throughout Season 4. He’s always been one of my favorites in terms of comedic characters. I look to him to pull me out of the darkness that Bojack is typically steeped in. Mr. Peanutbutter decides to run on a pro-fracking platform as he guns for office. Simultaneously, he admits he has no knowledge of politics. This was comedy gold. But, that too was also a not-so subtle nod at our current President – a reality star securing a job he knows nothing about.

Season 4 of Bojack Horseman ran the gamut of hard issues, covering more ground than previous seasons. Everything was pitch perfect – they hit all the right notes for me. “Visceral” really is the best way to describe this season. Brutal, dark, pulls no punches. Season 4 was like one long cathartic therapy session. The show is in top form and quite frankly, the best it’s ever been. These characters we’ve grown to love have continued to evolve, never remaining stagnant. My hope is that Season 5 stays on this path, should we be blessed with one.