The Big Bang Theory kicked off its 11th season tonight, picking up in the middle of the moment in which we left off in the season 10 finale: Sheldon (Jim Parsons) proposing to Amy (Mayim Bialik) in the doorway of her Princeton apartment. And of course, she said YES– as soon as he got off the phone.

While on one knee, Sheldon answers a call from Leonard (Johnny Galecki) and Penny (Kaley Cuoco), interrupting his proposal to fill them (and us) in on how he decided to go for it– Dr. Ramona Nowitzki (Riki Lindhome) kissed him, and he knew in that moment that Amy was the only woman he ever wanted to kiss again. He also shares that he got the blessing of both Stephen Hawking and Amy’s father, in that order, before hopping on the plane. When he finally hangs up and gives Amy an opportunity to answer, she accepts his proposal and they begin the next chapter in their journey of socializing Sheldon.

Amy invites Sheldon to stay in Princeton with her for a few days and takes him along to have dinner with two of her colleagues. Over the meal, Sheldon is completely undone by playing second fiddle to Amy as her colleagues treat her like a superstar and want to know everything about her research and papers. When they get home from the disastrous meal, Amy expresses her displeasure with his inability to let her shine by storming off to her bedroom and leaving him to figure out for himself where he can storm off to.

He chooses the bathroom, and after seeking counsel from poor Stephen Hawking again, he realizes that he missed a chance to support his fiancée the way the Avengers support each other when they appear in each other’s stand-alone films.

They make up, and he acknowledges that it may take their entire life together for him to figure out how to be appropriate in public, because he is terrible at it. Then he decides to go home so he can be back in his own spotlight, which Amy is OK with because her infinite patience with him is fueled by her sincere and unwavering love for him. And that’s nice.

Related: Catch up with all of our Big Bang Theory Season 10 recaps.

Back home, Bernadette (Melissa Rauch) and Howard (Simon Helberg) get a big surprise when Bernadette finds out she’s pregnant again. This exciting turn of events means that we’ve got the potential for some fun character evolution as one of the core duos moves from “parents of a baby they mention and often have just offscreen” to “parents of two kids who will likely create a whole new cycle of interpersonal chaos for everyone.” Even more promising: part of their response to the news is leaning on Penny and Leonard to start a family of their own. Now that that seed has been planted, who knows? 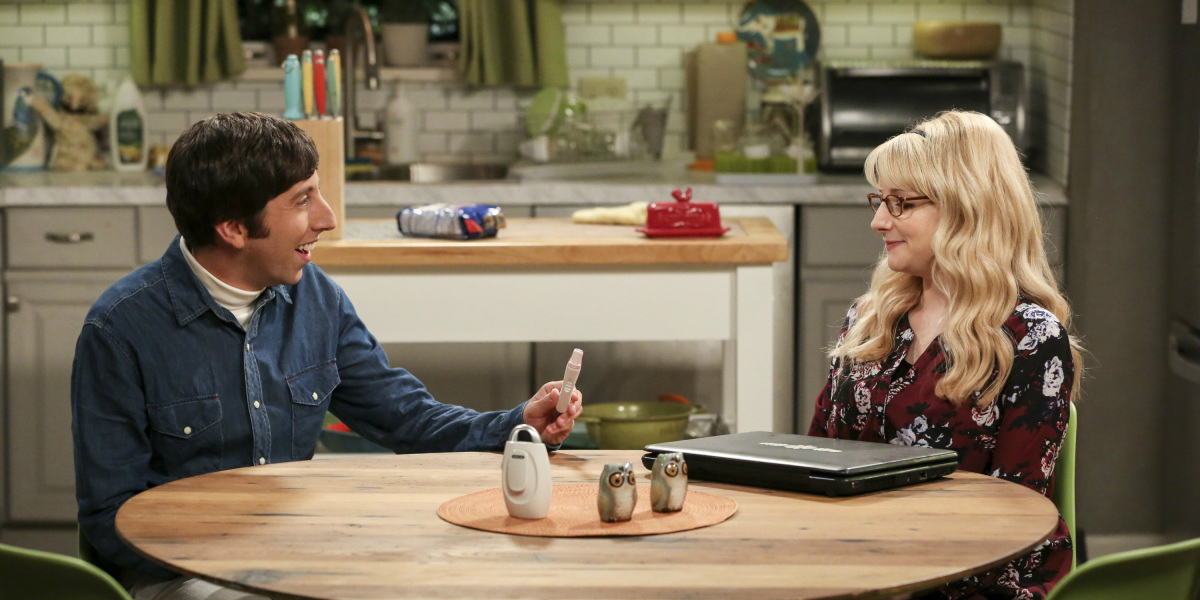 Meanwhile, Raj (Kunal Nayyar) feels left out now that everyone is coupled up permanently and moving forward except him, so he turns to Stuart (Kevin Sussman) for comfort and discovers that even their least popular friend is dating. He also tries making a move on Dr. Nowitzki once news breaks of ShAmy’s engagement, but he gets swatted down.

This episode hinted at big, interesting changes for ShAmy and the Wolowitzes, and the other members of the group looked pretty stale by comparison. Leonard and Penny accidentally celebrated their wedding anniversary on the correct date with very little fanfare, and Raj has a one-man pity party. Here’s hoping there’s some evolution in store for the three of them as well.

Best moments of the episode:

Amy being fawned over by her colleagues and then putting Sheldon in his place by suggesting he might not always be the smartest person in the room– even when they’re alone together.

Amy responding to seeing Dr. Nowitzki for the first time at the end of the episode, when we time-jump ahead three months to her return, by hugging and thanking her for catalyzing Sheldon’s proposal.