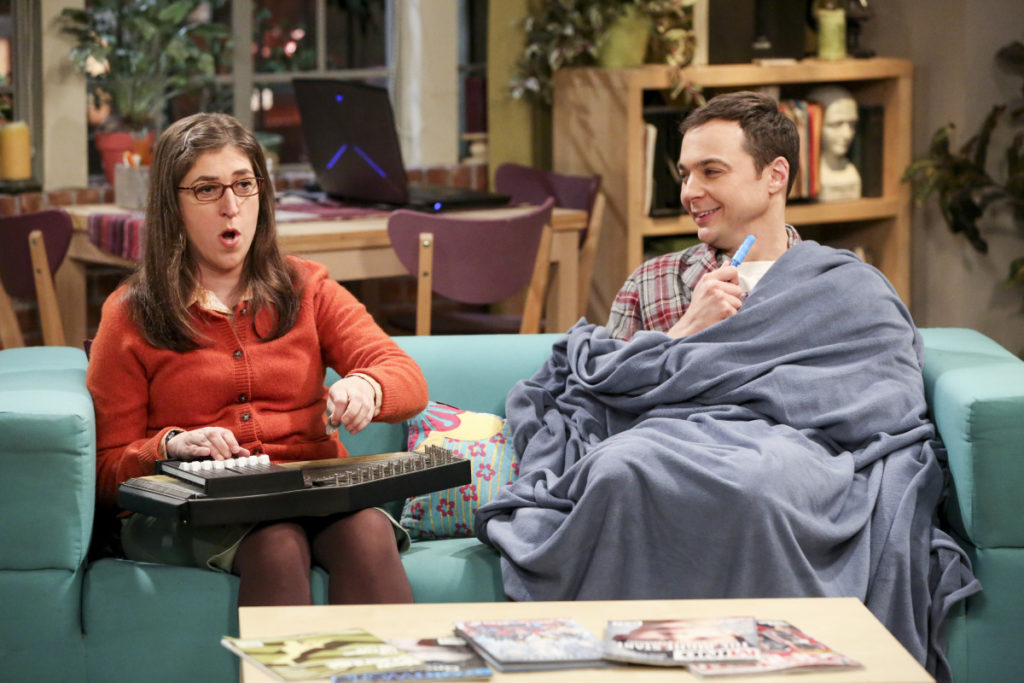 The Recollection Dissipation, tonight’s episode of The Big Bang Theory, could easily have been called “The Hangover Part IV: Sheldon and the Cold Medicine.” Unfortunately, the episode wasn’t 100% dedicated to recovering Sheldon’s memories of a missing day, so it was a diluted hangover.

Sheldon is convinced he can do it all. He double-books heavy work sessions with the guys and Amy on one day, running back and forth between their labs to spew his genius on them in little bursts. Although he’s remarkably successful at juggling both projects, helped in part by wearing dual Camelbacks – one with soup and one with water – the strain of overwork wears him down and leaves him with a cold.

Penny points out in a throwback laundry room scene that Sheldon’s composition is so delicate that he once caught a cold from watching Frozen, and everyone agrees that he’s overdoing it and needs rest. 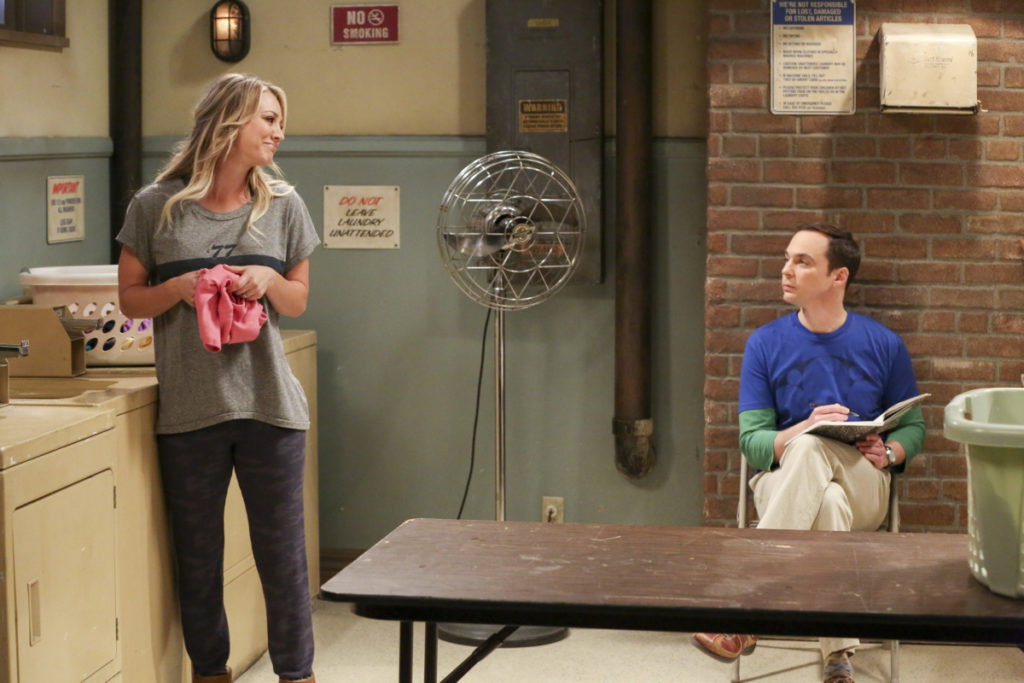 Instead, he takes cold medicine, and since he’s the world’s lightest lightweight, he gets so drunk from the medicine that he awakens on Leonard and Penny’s couch after losing a full day to a blackout. His underwear are in a pot on the stove, his pants are in the microwave and his notebook full of top-secret math is missing. 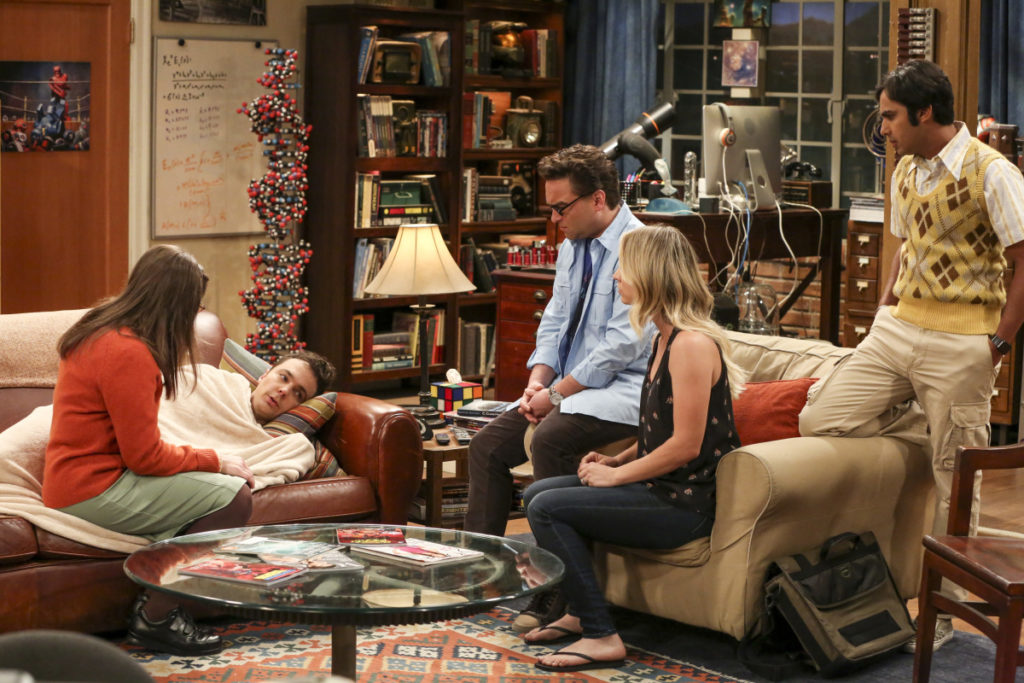 Raj helps trace Sheldon’s movements via his phone’s GPS, and they make their way to a cowboy bar where Bill Murray’s brother, Joel Murray, is barman. Sheldon asks if he left a notebook there, and Murray hands it over and reminds him that he told everyone in the bar his military secrets after making them pinky swear not to tell anyone.

The guys leave with Sheldon’s notebook back in hand, and bartender Murray erases calculations from a chalkboard.

So, Sheldon went to one place and then fell asleep on Leonard and Penny’s couch after stashing the lower half of his outfit in the kitchen. Not much of a Hangover unless that whole “breaching confidentiality” thing in the bar, or the calculations he did on the bar’s chalkboard, comes back in one of the season’s final episodes.

Meanwhile, Bernadette is struggling with the impending end of her maternity leave. She is torn between leaving her daughter in the care of others all day, seeing her for an average of 10 minutes every day between getting home from work and bedtime, and giving up the career she’s worked her whole life for. She wants to be a good role model for her daughter by demonstrating that women can have both careers and families, but it’s putting her through the emotional wringer to have to leave Halley. Once again, I like the way they interject notes of reality into the show like this. 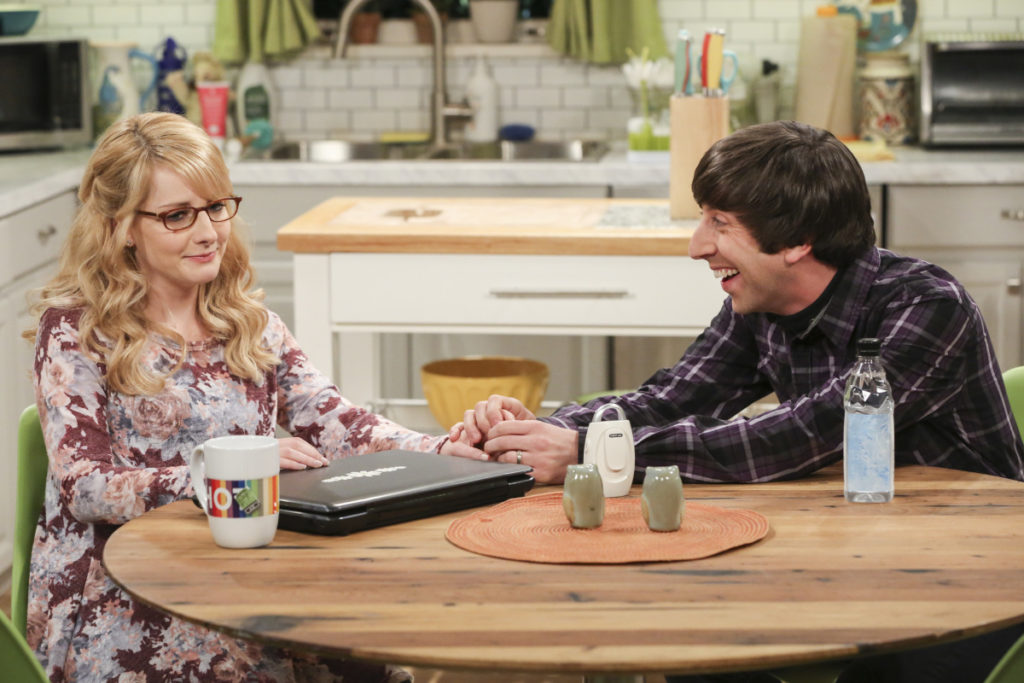 Finally, when Sheldon gets sick, you know someone’s gonna sing Soft Kitty. Now that he and Amy are shacked up, she gets the honor. In addition to accompanying herself on autoharp, she sings the song in English, German and Mandarin. I couldn’t confirm the accuracy of the Mandarin version, but I learned tonight that “purr, purr, purr” really does translate to “schnurren, schnurren, schnurren.” Thanks, TV!