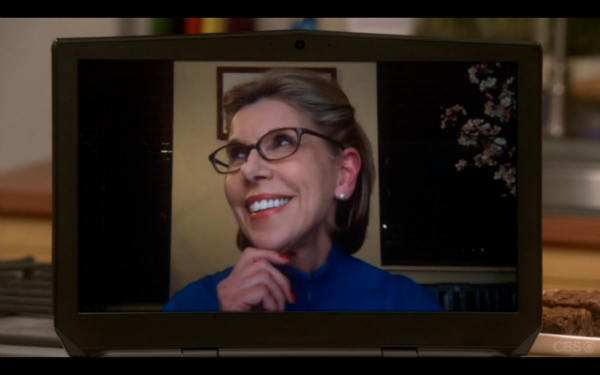 Tonight’s episode of The Big Bang Theory, The Escape Hatch Identification, continued the saga of Raj taking responsibility for himself with a housing shuffle.

When Raj posts on social media that he can’t afford his apartment and needs an inexpensive place to live, Howard and Bernadette and Leonard and Penny essentially draw straws to see who will offer him a temporary home. Raj’s choice of Sheldon’s old room at Leonard and Penny’s over the raccoon-infested garage at Howard and Bernadette’s introduces a note of chaos into all of the romantic relationships in the group. 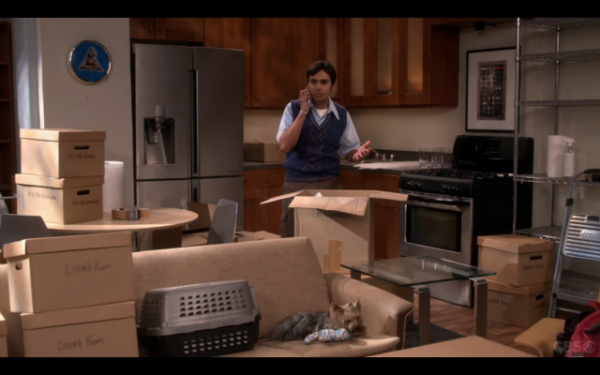 Sheldon is quietly outraged by Raj moving into his old room (with a dog, no less!), and although he conceals his feelings from Leonard and Penny, Amy coaxes the truth out of him. He Skypes Leonard’s mom (the delightful Christine Baranski) to seek psychological insight, and he and Amy are both undone by Dr. Hofstadter suggesting that Sheldon’s emotional response to the new living situation across the hall is rooted in his subconscious attachment to the vacant room as an “escape hatch” from living with Amy. Dr. Hofstadter suggests that Amy’s defensiveness about the idea indicates that Sheldon’s old room was her escape hatch, too. Then she throws out that Leonard and Penny inviting roommates into their marriage all the time is an indicator that they have problems, too.

Inspired by this assessment of the situation, Sheldon goes to Leonard and Penny’s to apologize to Raj for not having welcomed him sincerely. Of course, because he’s Sheldon, he also shares that he’s spoken with Leonard’s mother and that Dr. Hofstadter thinks Leonard and Penny have marital problems.

Leonard Skypes his mom to take her to task for making a casual diagnosis of his marriage, but she gets in his head and leaves him and Penny questioning their motives for taking Raj in. Unfortunately, Raj is aware of all of this and sneaks over to Howard and Bernadette’s to spare Leonard and Penny the burden of having him come between them.

By the next day, Leonard and Penny are recommitted to giving Raj a place to stay. Everyone agrees that he can crash at Howard and Bernadette’s from time to time, but he’ll live chez Hofstadter for the time being. 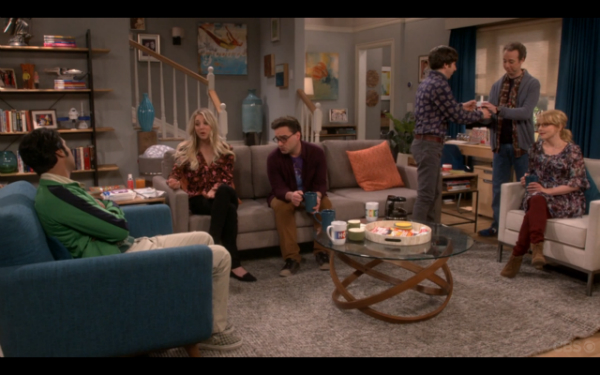 Meanwhile, Sheldon identifies to Amy that his major problem with Dr. Hofstadter’s view of things is that she believes his reaction to Raj was unconscious. Since his brain is his best friend, he expects it to tell him everything. Amy comforts him, as usual, with her gentle understanding of how he’s wired. She recognizes that he’s just a guy who likes to have contingency plans for everything. And he takes the sweet moment of recognition to his weird place by confessing that he’s even mapped a contingency for an apocalypse: the order in which he’d eat all of his friends. (She’d be dessert, because he loves her.)

By the episode’s end, harmony has been mostly restored. Raj has a home. The romances have all weathered the storm. Only Amy has anything to complain about, in that Sheldon has somehow manipulated her into allowing him to buy a life-size Batman statue for their home, and now it looms over their living room. 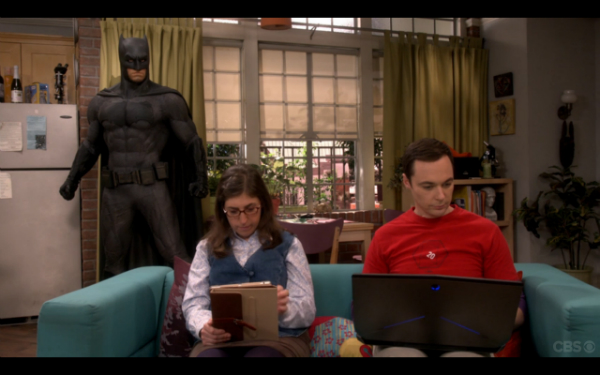