Let me start by saying that I was late viewing The Big Bang Theory tonight because I had to go see Lego Batman, which was rad. No spoilers about it here, but if you’re thinking about seeing it, I’d encourage you to go. In fact, go now! This recap will be here when you get back.

Tonight’s episode, “The Locomotion Reverberation,” could be subtitled “remember this?” because a lot of it felt like unsubtle reminders of things that haven’t come up for a while. Remember that government project Sheldon (Jim Parsons), Leonard (Johnny Galecki) and Howard (Simon Helberg) are working on? That’s still happening! Remember how Raj (Kunal Nayyar) and Stuart (Kevin Sussman) are competitive extra wheels on Howard and Bernadette’s (Melissa Rauch) parenting team? That is also still happening!

I’ll sum up that the government project is still happening, and Sheldon is being characteristically annoying by suggesting that he can improve on their nearly-complete prototype. Leonard distracts him by giving him a $4000 fantasy railroading gift certificate he’s been holding back for an emergency, and nearly as soon as Sheldon has left the building, the Colonel (Dean Norris) visits the lab, sees Sheldon’s math on a white board and asks for the version of the nav system suggested in that math. Leonard and Howard have to beg Sheldon not to leave physics for becoming a train engineer. (He has brought a locomotive engine home to practice on.) They succeed. All is right with the world. 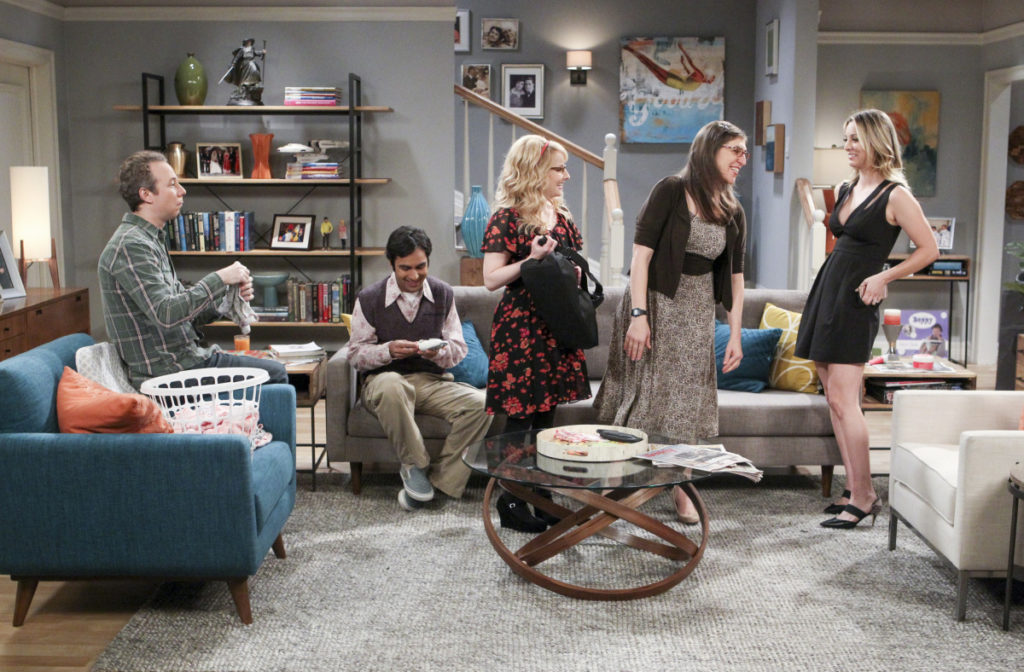 The more interesting moments in the episode happened amongst the show’s women. The scene with the most heart was a big Bechdel Test PASS as a girls’ night out takes a turn towards the emotional in a bookstore parking lot. The club Penny (Kaley Cuoco) hoped to take Bernadette to as a break from momming has been replaced with a bookstore, and Penny finds herself saddened by what feels like a failed attempt to recapture her youth. She confesses to Bernadette and Amy (Mayim Bialik) that Bernadette’s new role as a mother has made her feel pressured to grow the rest of the way up and achieve more adult milestones. Amy, in an attempt to comfort Penny, compares her life with a less committed partner (in terms of marital status), smaller salary and smaller apartment than Penny, which results in her beginning to cry. This triggers Penny’s crying, and the crying in the car makes Bernadette lactate. Not glamorous, but sweet and authentic.

On the flip side of that female bonding, we were treated to another of Amy’s vivid fantasies about Sheldon, and I wish I could find a clean video of it to embed here because it was delightful. A shirtless Sheldon is driving a locomotive while Amy watches with nerves taut. He apologizes for having worked up such a sweat and pulls and cranks machinery. Then he asks to borrow Amy’s water and dumps it all over himself while Scorpions’ “Rock You Like a Hurricane” plays, and Amy looks like she’s going to combust… until Sheldon breaks into her reverie by telling her the light has turned green and that they’re only three hours away from the railway. She crouches behind the steering wheel and says with determination, “I can get us there in two.”

"I love that fantasy can take us to another world, and...make us deal with these big high-stake situations."

Webtoon has announced their partnership with Rewriting Extinction! Check out everything you need to know before it kicks off on November 29th!