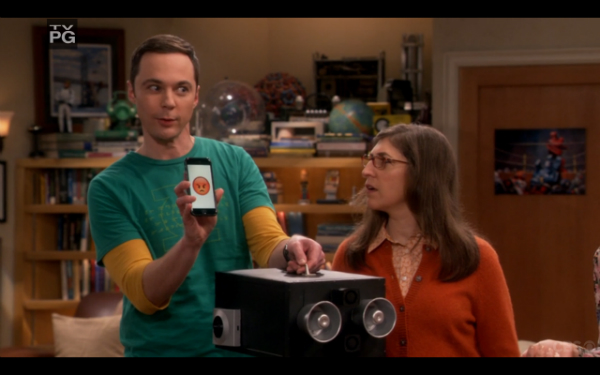 What are your favorite things to see on The Big Bang Theory? Mine are probably Shamy and Raj’s girlfriends. Tonight’s episode, The Emotion Detection Automation, delivers on both fronts.

The big stories in this ep are Sheldon getting an emotion-detecting machine and Raj staging an ill-conceived focus group made up of his ex-girlfriends so he can figure out why he keeps getting dumped.

One of the many things I like about Shamy episodes is that they tend to explore aspects of what we can assume is Sheldon being somewhere on the autism spectrum. His difficulty identifying others’ emotions and his insensitivity to the emotions he does detect have been issues since before Amy joined the group, but his desire to form a closer bond with her than he has with anyone else forces him to strive for evolution on this point.

This episode opens with the guys carrying Thai food upstairs, discussing Raj’s latest breakup. (Am I the only one who’d completely forgotten he was dating that nice Latina cleaning lady from work?) Sheldon’s insensitivity to what Raj means when he says he’s fine (that he doesn’t want to talk about it) leads to a frank conversation in Leonard and Penny’s apartment about how hard Sheldon’s inability to recognize emotional cues is for him.

Bernadette mentions that she read that a team at MIT has developed a device that recognizes human emotions with 85% accuracy, and Howard, being an MIT alum, says that he’ll make some calls to see if he can get Sheldon a prototype. (It’s real!)

When Howard delivers the machine, Sheldon and Amy take it to Leonard and Penny’s place to test it out. Penny has just surprised Leonard with the news that her brother will be staying with them indefinitely while he tries to get a job at her pharmaceutical company, and Sheldon’s device helps him identify that Leonard is angry about this, contrary to what he’d told Penny.

The device’s accurate readings of Leonard’s anger about the prospect of his brother in law moving in with them and Penny’s suppressed anger about Leonard wanting to turn Sheldon’s old bedroom into a “gaming room” with a massive TV lead to a big blow-out between Leonard and Penny with Sheldon caught in the middle.

Later, Amy is ready to serve dinner, and when Sheldon doesn’t respond to her call to come to the table, she finds him curled up on the bed looking sad. He tells her that although he’s always known he had trouble recognizing emotional cues in others, the machine had made it more real and that seeing how many cues he’s still missing has made him feel like he hasn’t made any progress at all. 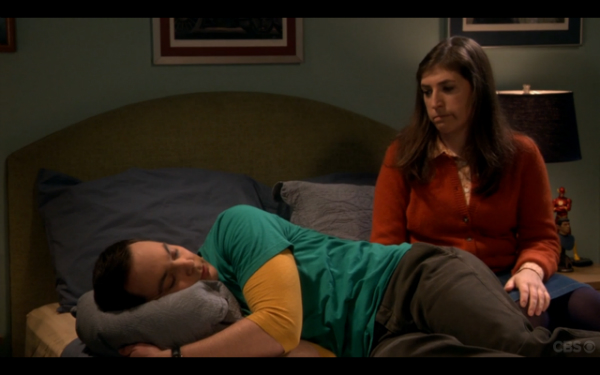 Amy reassures him that he has made progress, and that she loves him just as he is. He tells her he feels the same about her, and I thought he was finally going to pull out that heirloom ring, but I guess you don’t waste a proposal on a normal season episode. Instead he tells her she looks weird without her glasses, and they’re back to business as usual.

When Leonard and Penny come by to apologize for letting him get caught in their crossfire, Sheldon is so satisfied with his ability to read their emotions in that moment that he decides he can send the machine back.

Meanwhile, Raj is determined to figure out why women always dump him, and he invites his ex-girlfriends over so he can pick their brains in an awkward group setting. Present are anxiety-riddled Lucy (Kate Micucci), deaf Emily (Katie Leclerc), horror-fan Emily (Laura Spencer) and bartender side-piece Claire (Alessandra Torresani). 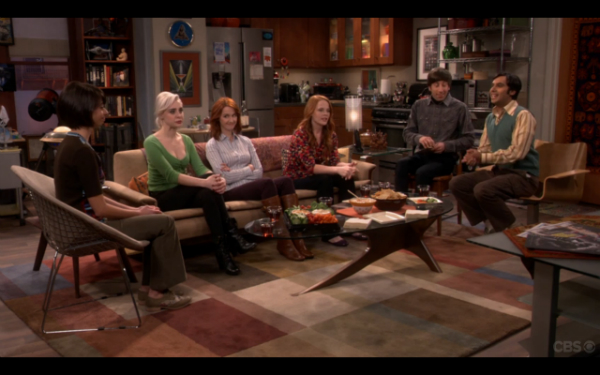 Howard is on hand to lead the Q&A, translate sign language for the deaf Emily and take notes. Although each woman has a different specific reason for having dumped Raj (he pushed Lucy into situations that triggered her anxiety, he was too needy, he was too much of a mama’s boy…), they all agree that dating him showed them enough about what they don’t want that they were able to find ideal partners after him.

The results of the focus group don’t give Raj much insight, but they do lead to him and Howard exploring what it would be like if they became a couple in a hypothetical future. It doesn’t look like a real Howard-Raj-Bernadette love triangle is on the horizon, but after having all the women agree that Raj is a mama’s boy, I’m kind of hoping they’ll set him up with an arranged marriage. That could be very interesting!