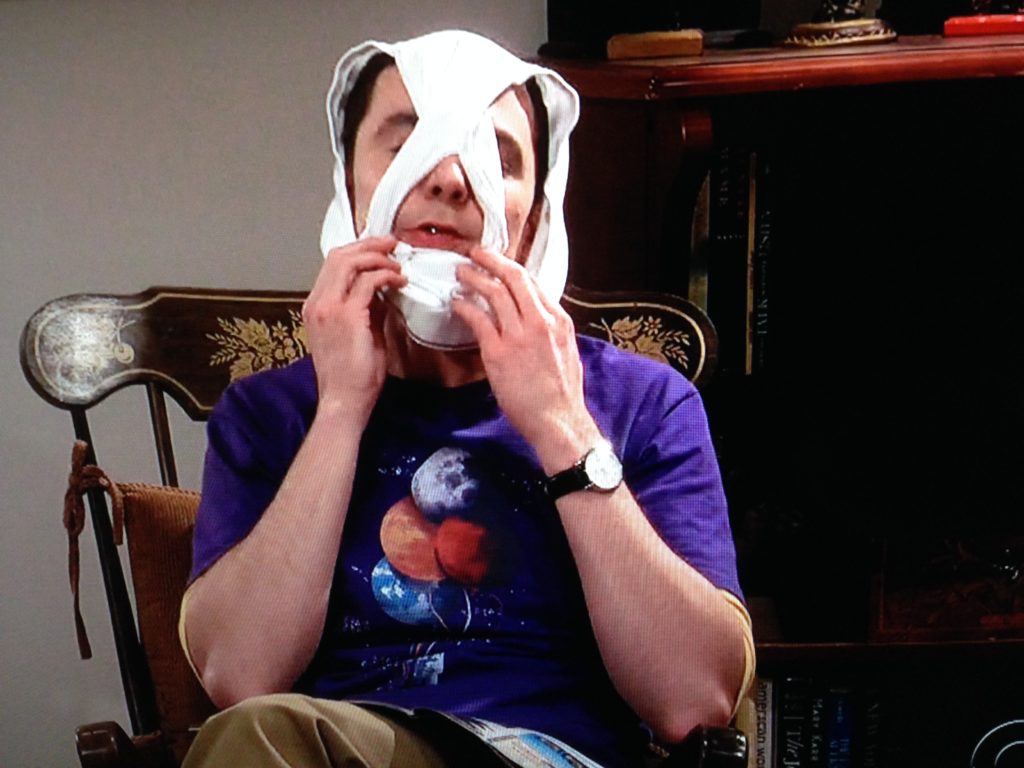 The Big Bang Theory crew has spent the holidays apart, and now that they’re all back together for their first group meal of the new year, they’re catching up. 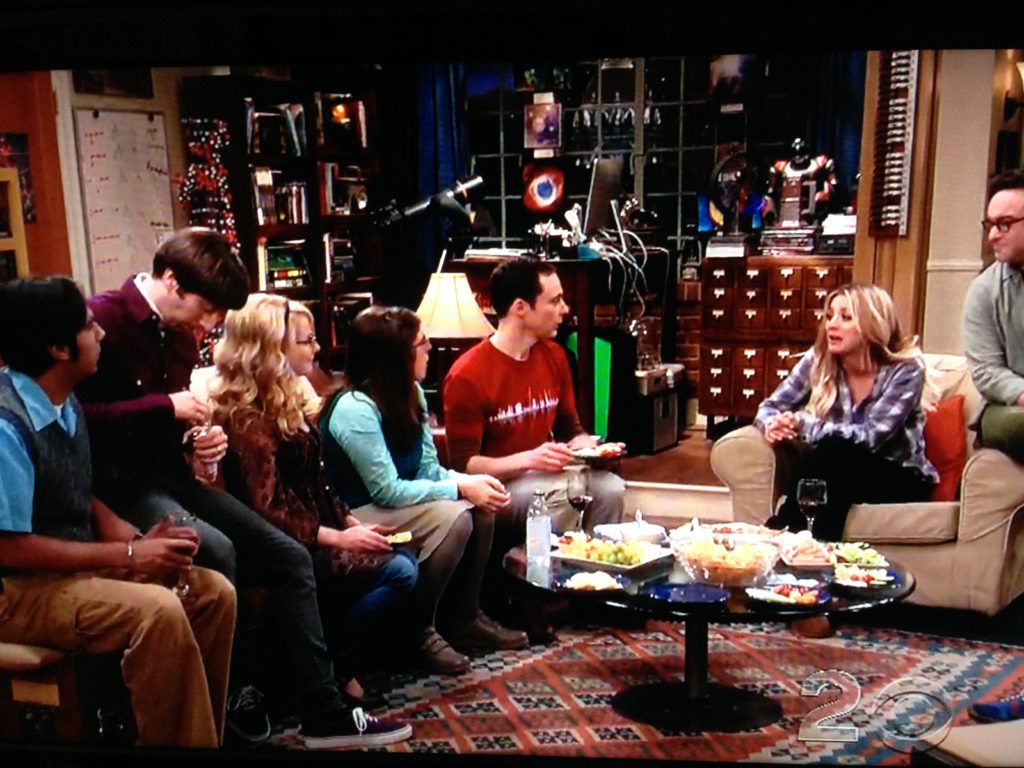 Sheldon and Amy spent Christmas in Texas, where Amy initiated them telling Sheldon’s mom that they’re living together. Much to Sheldon’s surprise, they didn’t get the “religious lecture” his siblings had received when living in sin. Instead, Shelly’s mom is relieved to see that he won’t be spending his middle years alone (the years between living with her and his hypothetical future with nurses). 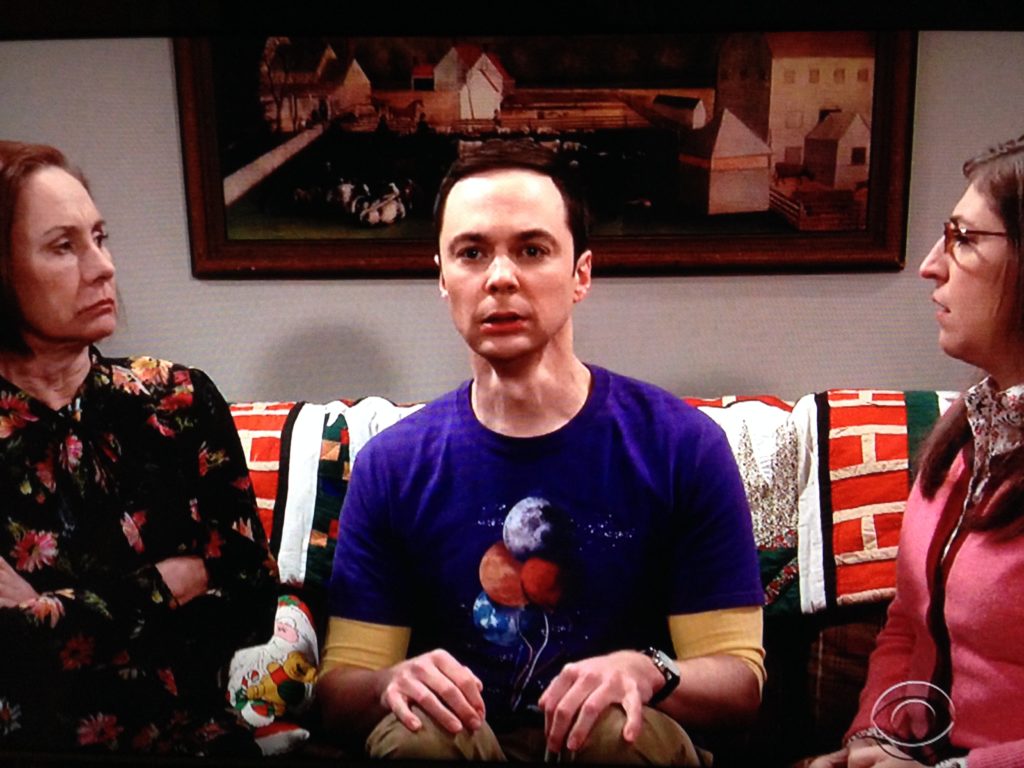 Sheldon, incensed that his mother thought him too odd to attract a mate, begins acting out (hence the underpants on the head). Amy takes him for a drive and explains that she’d actually broken the news to Mrs. Cooper before they’d arrived in Texas in an effort to manage the situation. This adds to Sheldon’s outrage, since now he believes that his mother didn’t expect him to find a mate and his mate doesn’t think he can manage his life. Amy lovingly explains that he’s great at science and keeping a tidy sock drawer but weaker in knowing how other people are feeling. She tells him that they help each other with their weaker points, and harmony is restored between them. 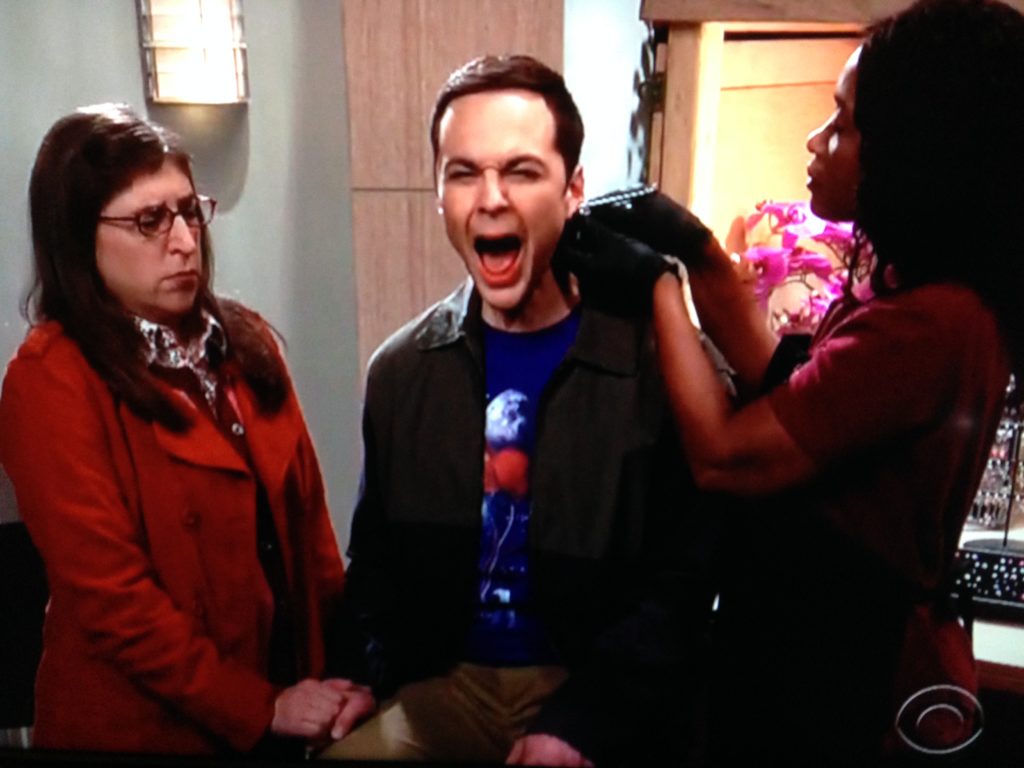 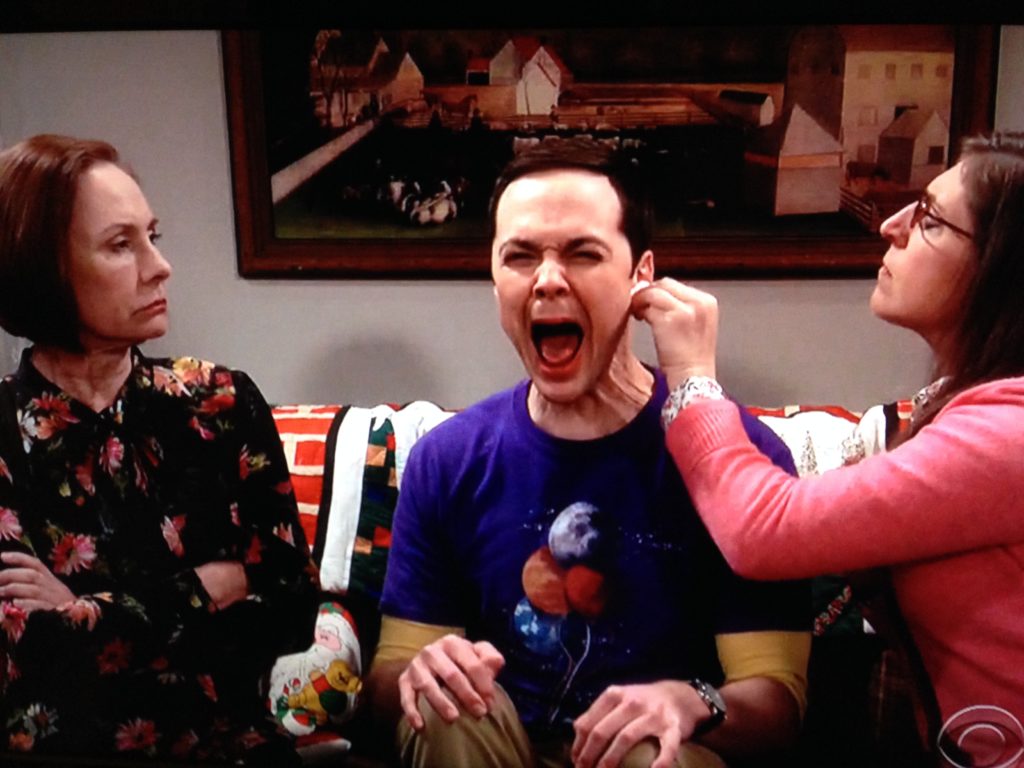 Leonard and Penny spent the holidays alone in LA, and they tell the gang that they had their worst fight ever when Leonard found out Penny had watched two episodes of Luke Cage without him. (BTW, AS IF one of these geeks would have waited this long to binge a Marvel show. They would have stayed in the weekend it dropped to watch it in one go.) When pressed, they admit that a Christmas tree debacle might have contributed to the intensity of the fight. 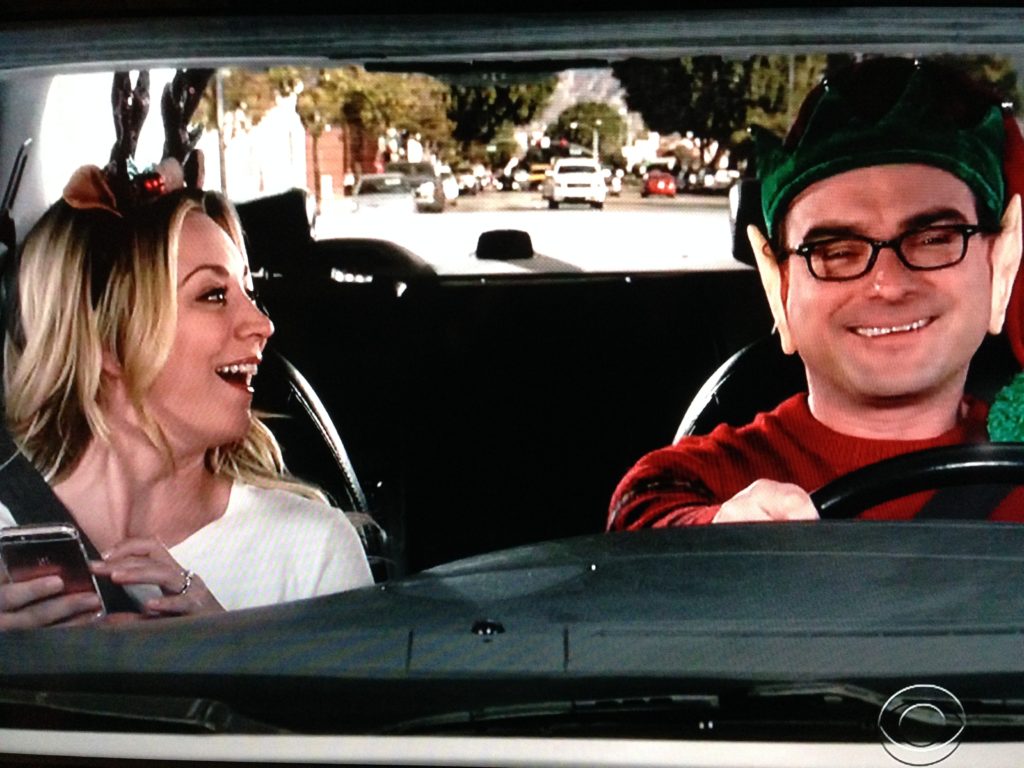 Apparently, the holiday-cheery duo decided to go to a farm where you can chop down your own tree. Needless to say, lumberjacking is not an area where Leonard excels. Bedraggled and bruised, they barely make it home with their massive tree (after nearly losing it from the car roof and again on the stairs in their building). Once they’ve dropped it on the living room floor, a wild animal starts chattering in the branches and they wearily hope the visitor will kill them both. End of story: the elevator shaft has always had a Christmas tree in it, should anyone ask. 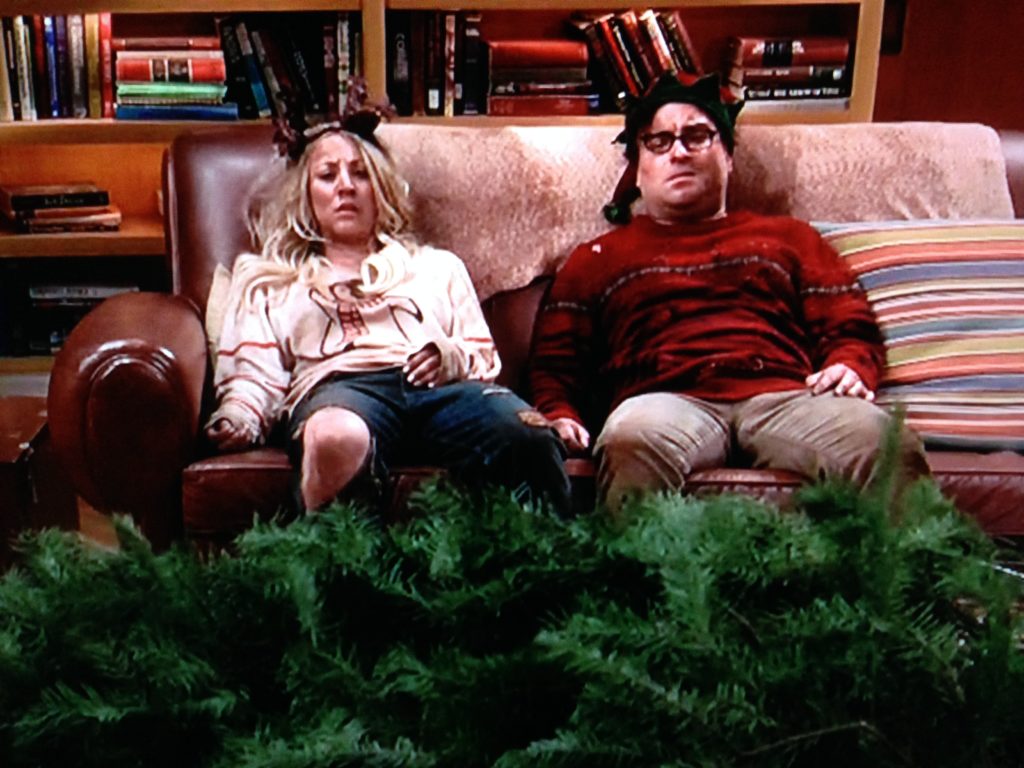 Howard and Bernadette celebrated their first Chrismukkah as parents, apparently with Raj and Stuart on hand to help. The distinguishing element of their time away from the group of friends was learning to get baby Halley to stop crying and go to sleep. (There’s something special about the fact that the show has committed to having this off-screen baby continue to sound like a tiny version of Howard’s mother instead of like a normal human child.) 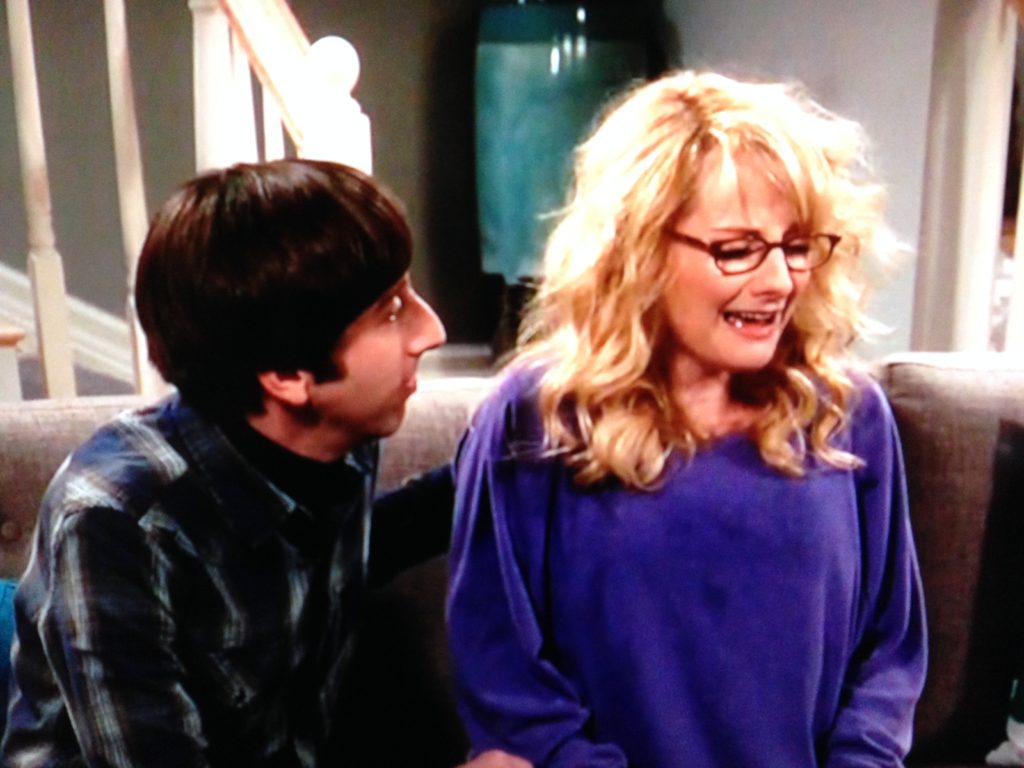 Stuart, a baby whisperer, uses the power of his soporific voice to knock the wee babe out. Bernadette, on the other hand, is so exhausted from failing that she is frequently in tears herself. Happily, she realizes that just as she’s small enough to bathe in the kitchen sink if she chooses, she’s small enough to climb into Halley’s crib and sleep with her, which works.

An effective way to bridge the gap in weeks between episodes, if not the most memorable gathering of the super friends.

Only one more day until we can uncover all the answers to #ResidentEvilVillage! Did you see the final launch trailer?