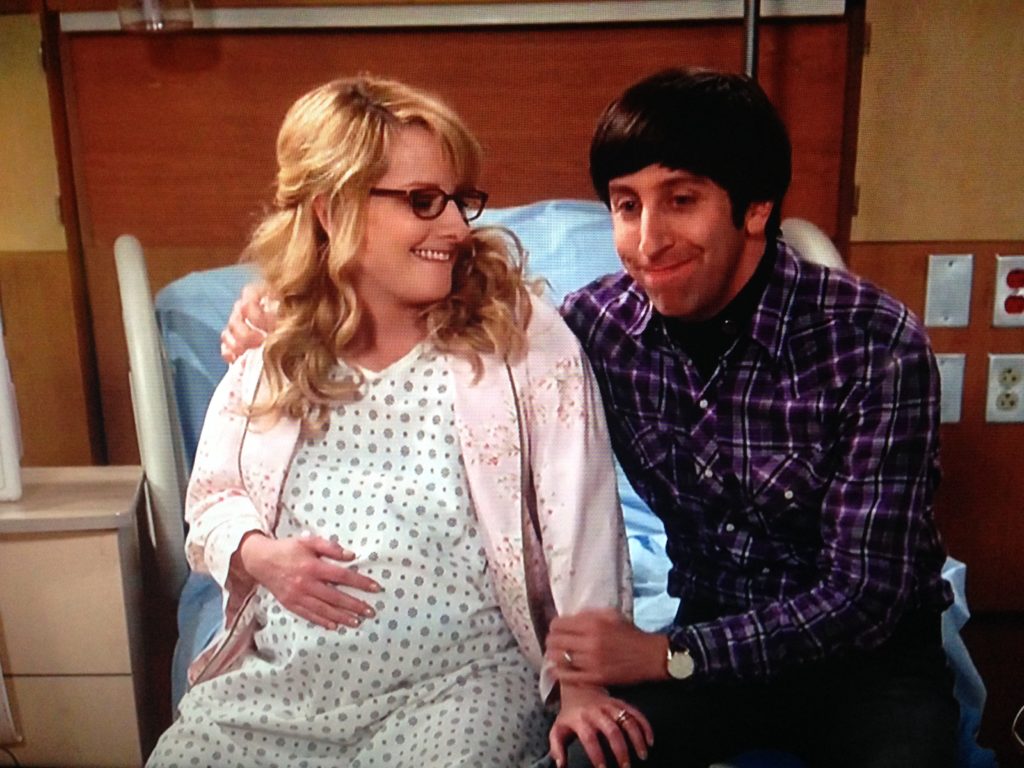 Honestly, if The Big Bang Theory is going to skip weeks (like they did last week, for example), you’d think they’d time it so that new episodes didn’t go up against opening nights for geeky movies. Why air a relatively important story like the birth of Howard and Bernadette’s daughter against the opening of Rogue One? I know that’s where I was tonight, and it’s sheer willpower that had me watching TV as soon as I got home so I could contribute my recap of “The Birthday Synchronicity” to the Geek Girl Authority TV Recap world in a timely fashion. You’re welcome!

Tonight’s episode was, in a word, sweet. It’s Amy’s birthday, and Sheldon wakes her exactly at midnight to give her a present: a scan of his brain lit up while he was thinking of her. (Honestly I think this would make an awesome present for anyone, even if s/he isn’t in a brain-related field.) She loves the gift, and they share a lingering kiss that promises to segue into their annual coitus session when… 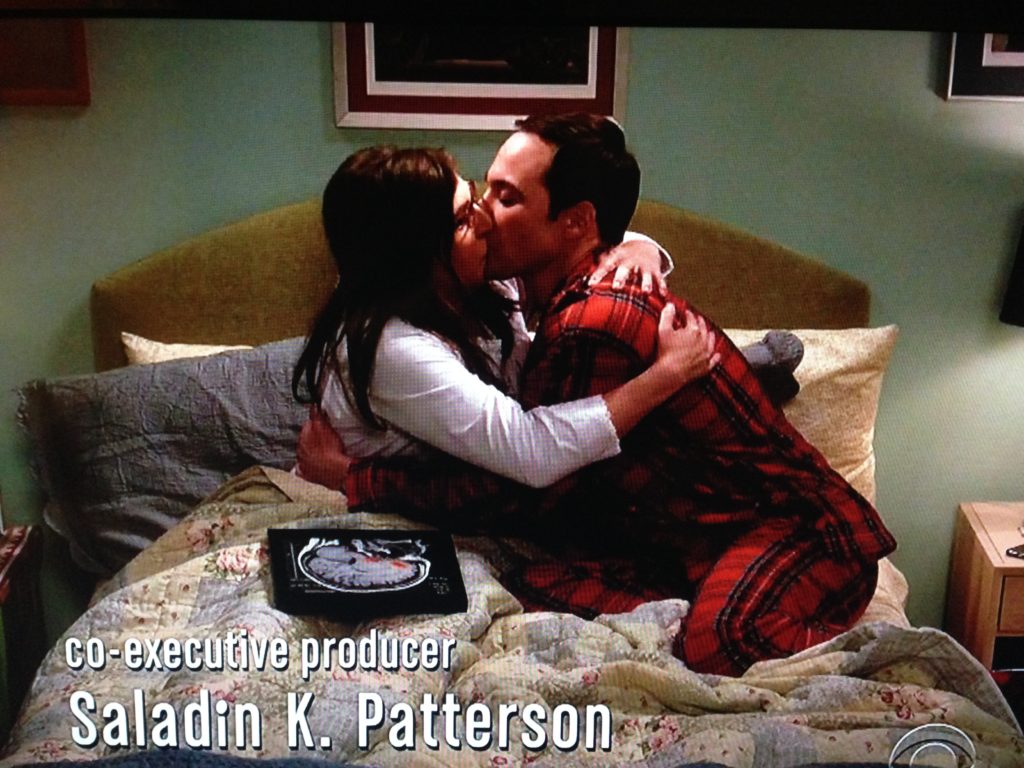 Leonard and Penny come knocking to let them know that Bernadette is in labor and it’s time to go to the hospital! 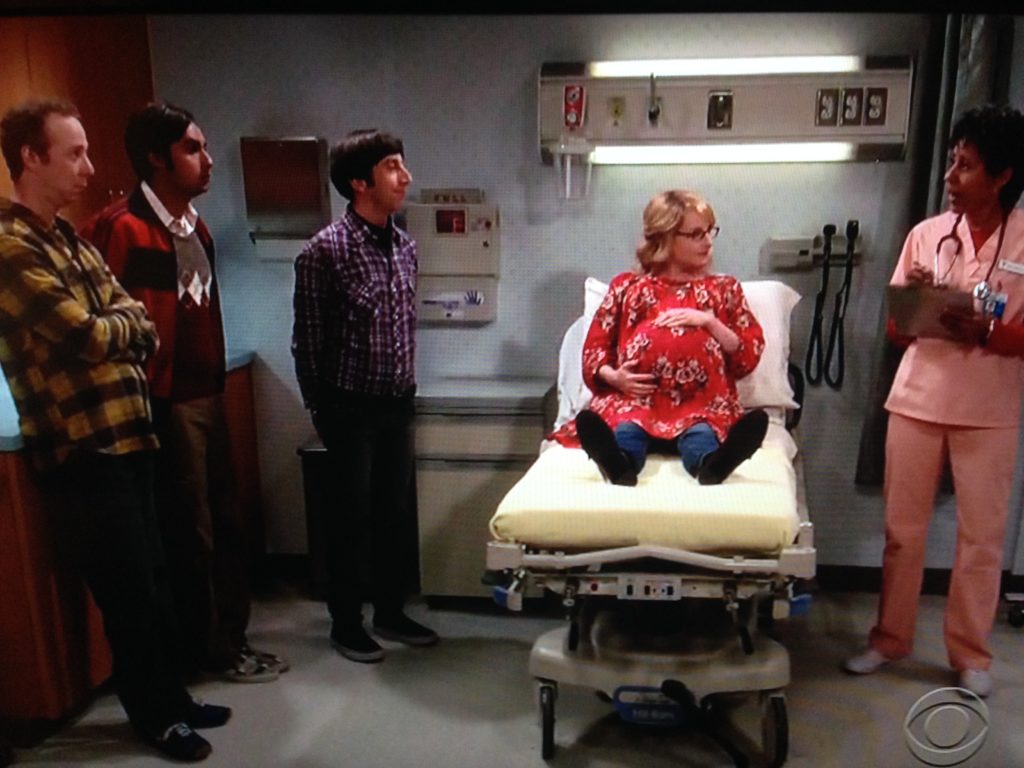 Unfortunately, by the time they’re ready to head out the door, they’ve gotten the news that the hospital sent Bernadette home until her contractions got closer together. They slip back into their apartment to pick up where they left off, but the moment seems to have passed. Good news, though: Amy has something up her sleeve!

She ducks into the restroom to “slip into something more comfortable” and emerges in a Hogwarts robe and Hufflepuff scarf, swinging a wand and ready for love. Sheldon is stunned with arousal, which escalates when she produces a “Gryffindor Robe” for him (we can assume it’s a Quidditch robe, since it’s maroon). But the mood turns again when Sheldon realizes that Amy must have gone to The Wizarding World of Harry Potter without him. (Which was a big “as if” for me, because AS IF she would do that without expecting Sheldon to react poorly. As if.) 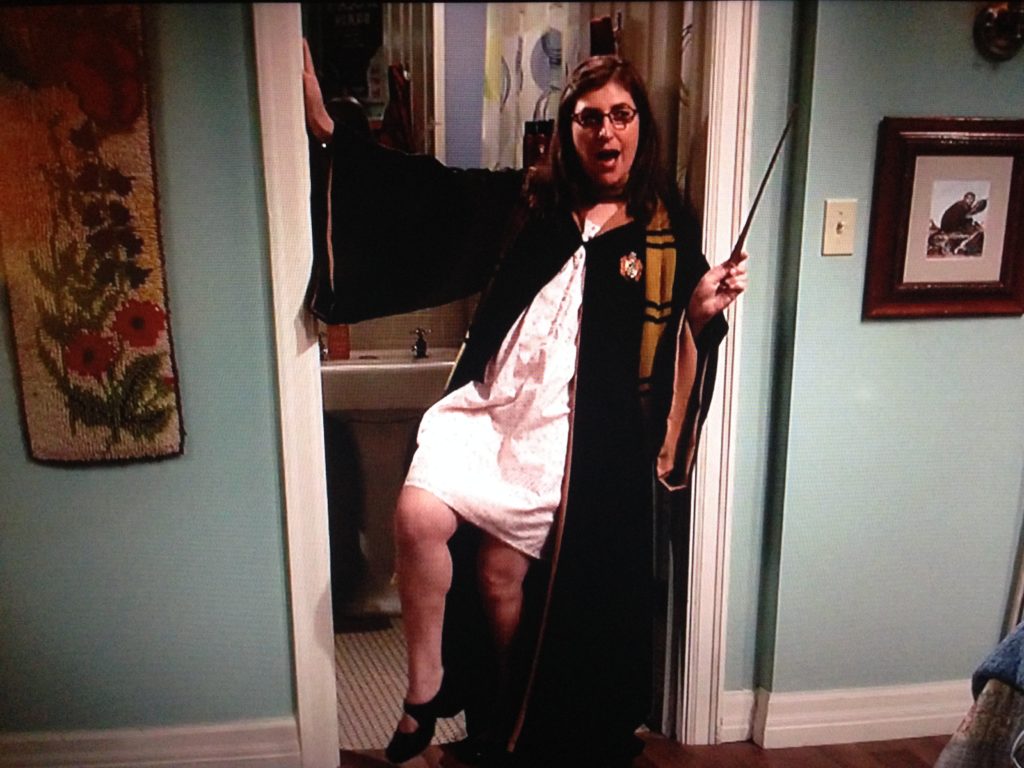 It doesn’t matter that the mood is off, though, because Bernadette’s water has broken and it’s time for everyone to convene at the hospital after all.

During the coital misadventures of Shamy, Leonard and Penny have also had their romantic aspirations thwarted by Leonard’s respiratory problems and Raj has been expelled from the Wolowitz household for spoiling the baby’s gender when they were sent home.

When everyone arrives at the hospital, it’s fairly standard-issue “having a baby on TV” action for Howard and Bernie, which means that she asks for ice chips and claims to never want to sleep with Howard again when she isn’t screaming about her pain. There’s a sweet moment where they consider naming the baby they now know to be a girl after Howard’s mother, Debbie, that gives Bernadette an excuse to pull out her old impression. They lament her absence during this important moment, which was a nice tribute to the late Carol Ann Susi, who played Howard’s never-seen mother. 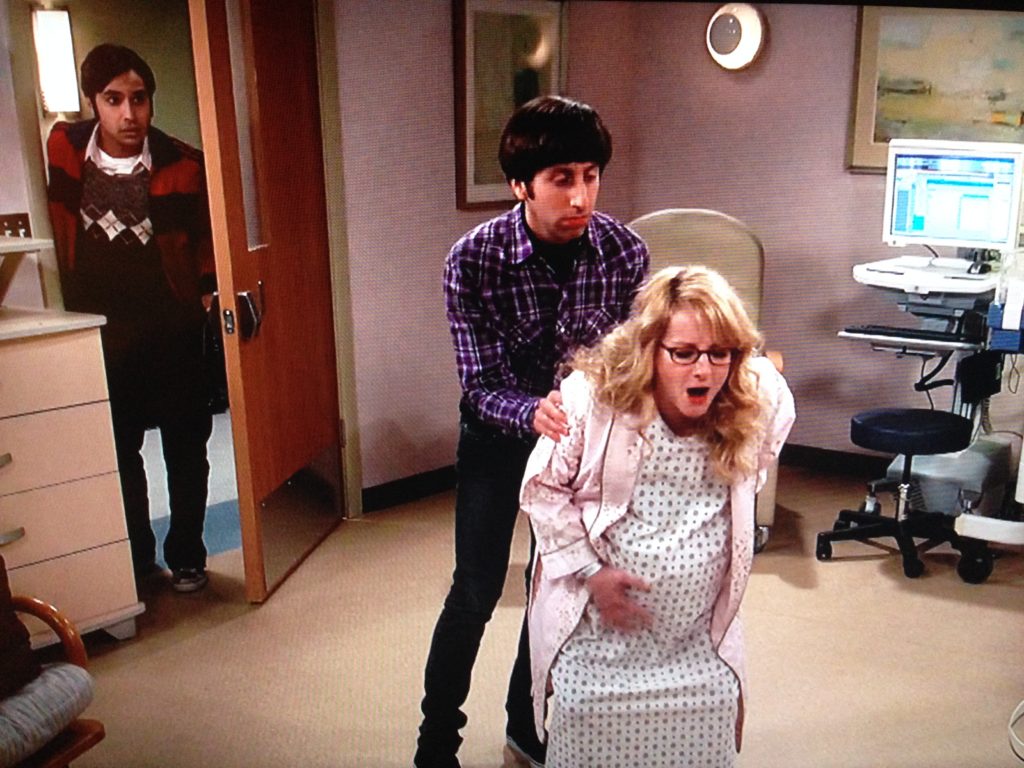 Meanwhile, the gang is in the waiting room reflecting on how far they’ve come in the last 10 years. They run through the ways they’ve grown and changed– how Leonard and Penny have married and Amy and Sheldon are living together and how Bernie and Howard are becoming parents just off-screen. To everyone’s surprise, Raj takes the whole conversation personally, feeling like he’s the only one who hasn’t done anything special. Stuart tries to comfort him by offering himself for comparison, but Raj won’t have it. He’s only overcome his inability to talk to girls in the last decade, and that’s not enough. 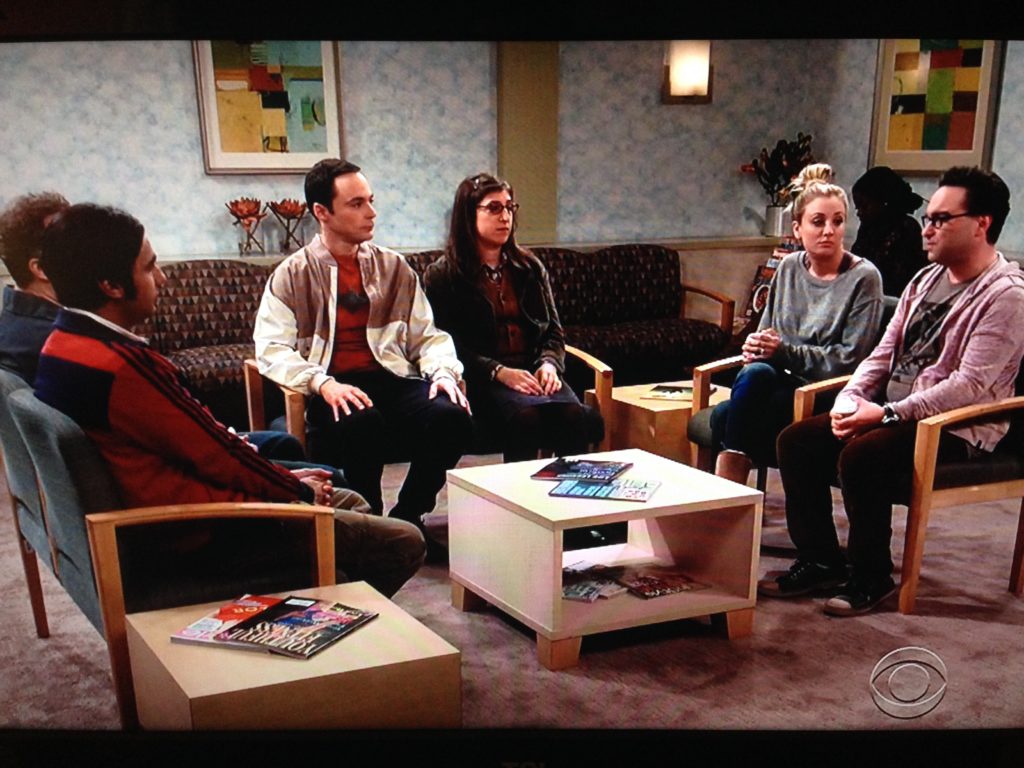 But soon baby Halley, named for Halley’s Comet, arrives. Howard runs out to the waiting room to tell everyone the good news and to let Raj know that he’ll be the Godfather. This turns Raj’s frown upside-down in a hurry.

The gang goes to the nursery window to try to pick out baby Wolowitz, and Raj insists that he’ll know his Goddaughter when he sees her, but before he can identify her by sight, one baby starts crying in a voice just barely removed from Howard’s mother’s. That’s their girl. 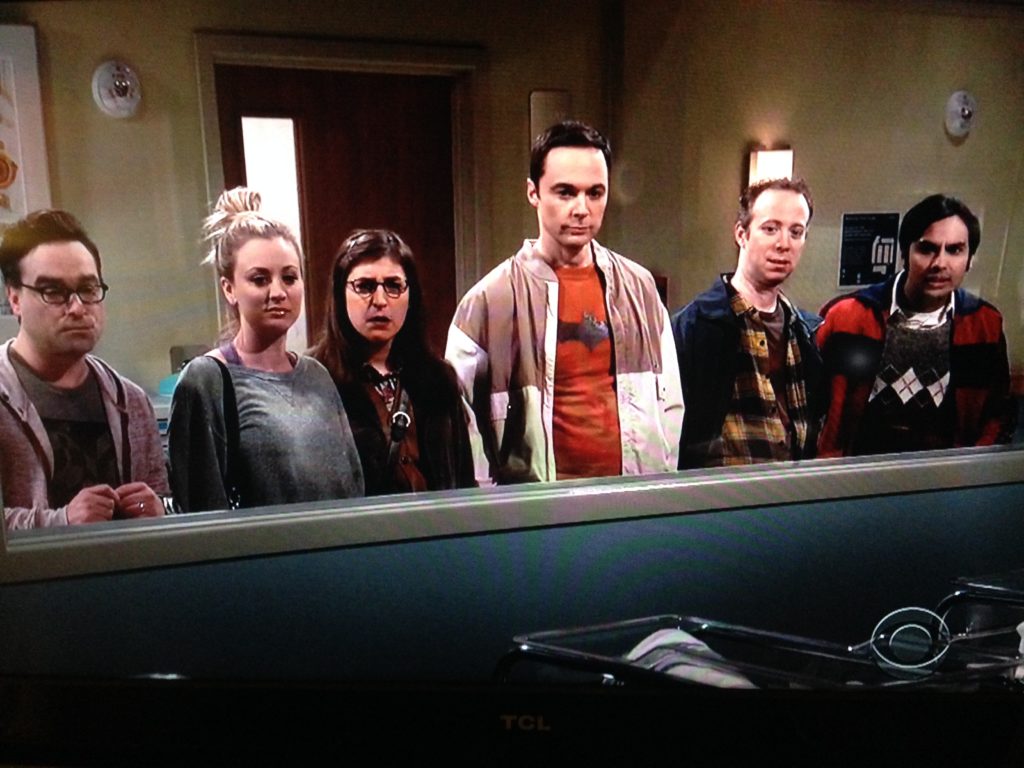 The episode ends with a happy Sheldon and tired Amy returning home from The Wizarding World of Harry Potter, where they went immediately after leaving the hospital. They’re heavy laden with souvenir clothing and accessories, and Sheldon asks Amy if she’d like to resume their coital appointment when they get inside. She’s surprised, thinking he’d be too tired, but since he just saw a magical train and got to report someone for cutting a line, he’s revved up and ready to go. They scurry into the apartment, and we can assume they have the best night of Amy’s year. 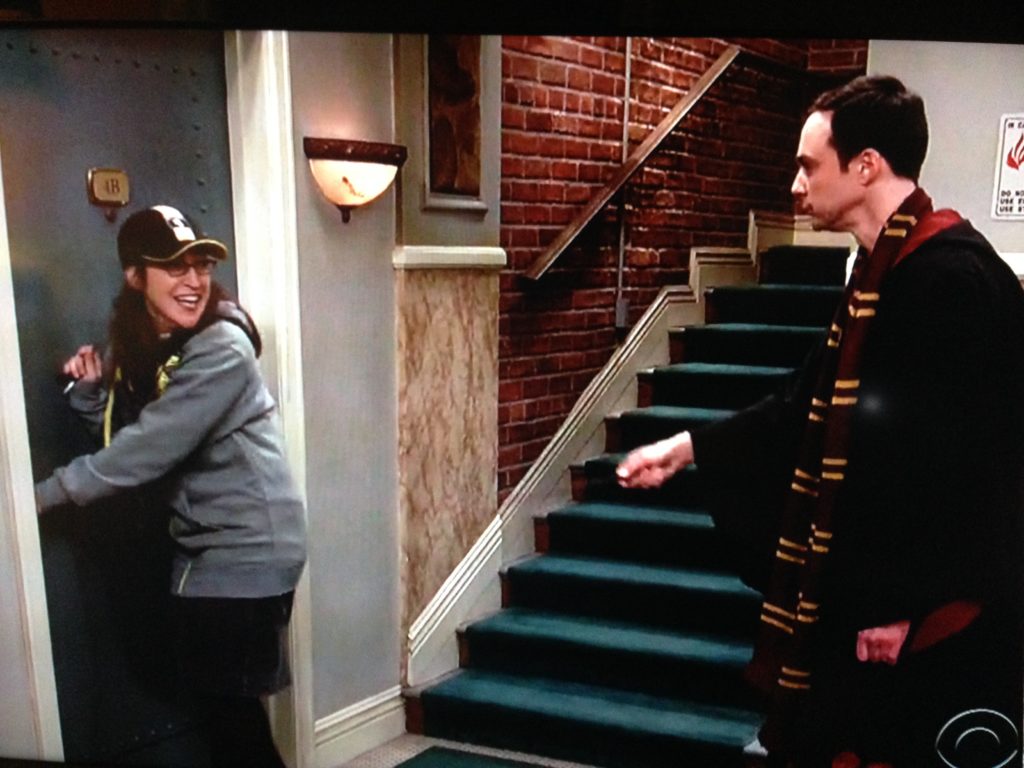