Season 10’s fifth episode of The Big Bang Theory is mostly fluff– slight moments that are pleasant while they’re happening and forgotten quickly– with a couple of quick moments of substance thrown in for balance.

In “The Hot Tub Contamination” Sheldon (Jim Parsons) and Amy (Mayim Bialik) are bickering about little things he refuses to compromise on, particularly the “bathroom schedule” and sharing a single toothbrush holder. They involve Leonard (Johnny Galecki) and Penny (Kaley Cuoco) in their disagreement, and in the interest of preserving their Sheldon-free household, the Hofstadters separate the squabbling couple to give them room to cool down. 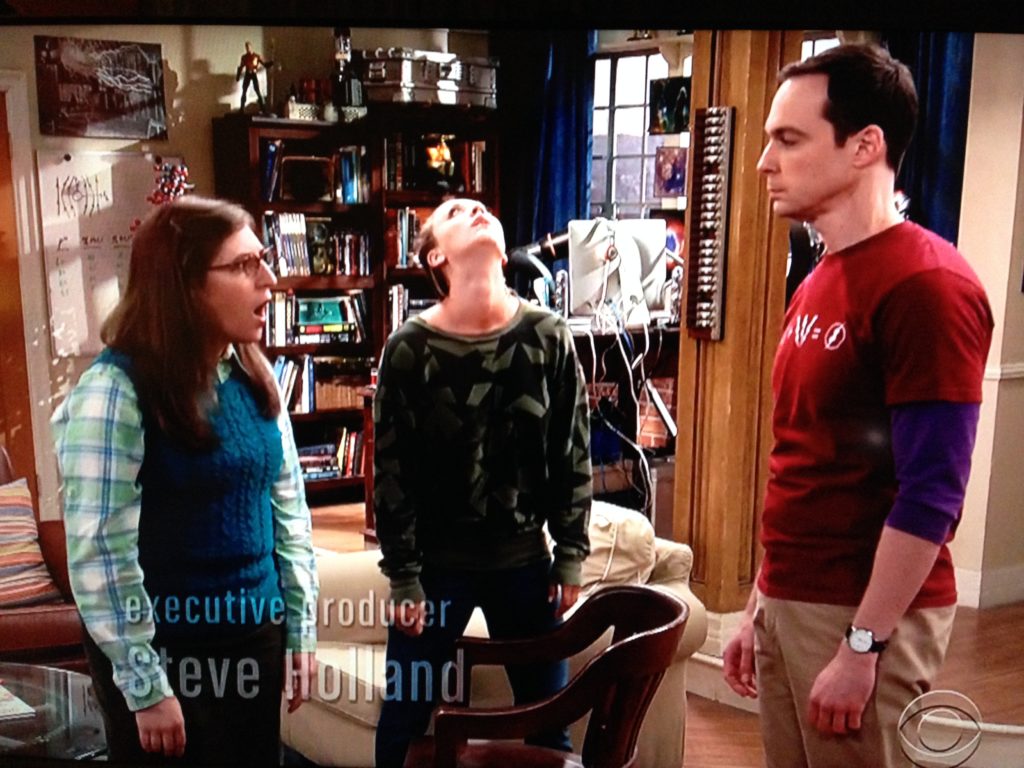 Penny and Sheldon drive around town, griping to each other about enduring indignities like their partners’ lustful post-shower scrutiny and bedtime breathing habits. Leonard and Amy stay behind to drink tea while Amy lays out her concerns and Leonard fails to comfort her with his assertions that Sheldon is basically the worst. 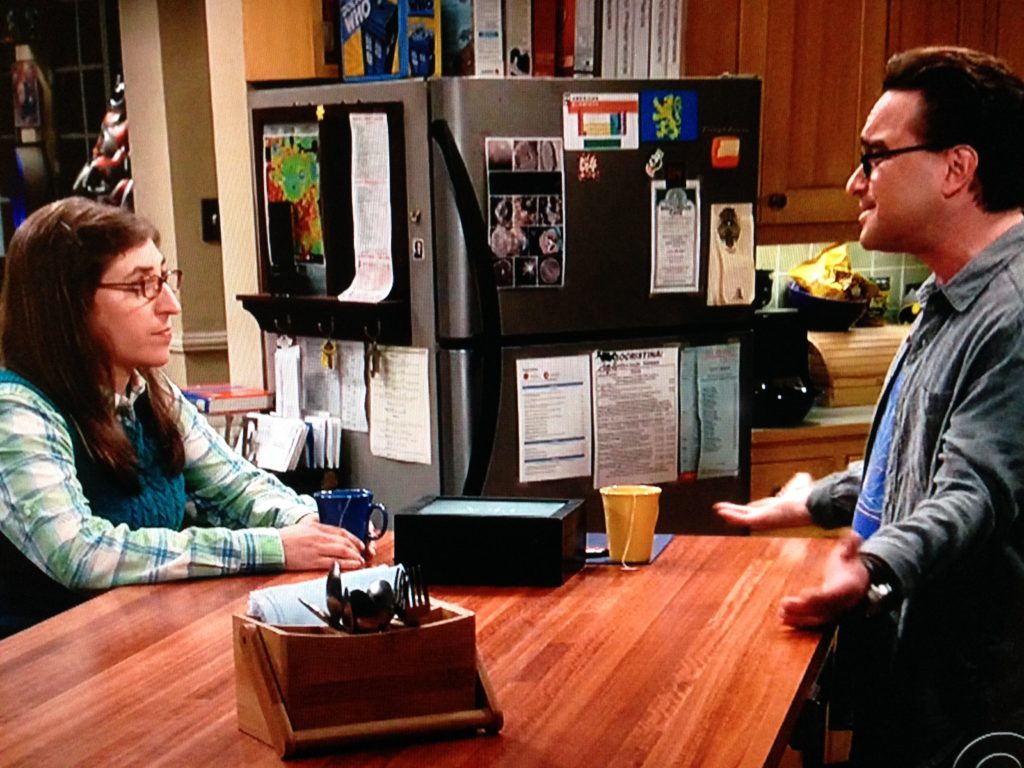 Eventually Penny and Sheldon wind up at an ice cream parlor, where we get our first moment of substance. Sheldon confides in Penny that when he was 13 (and home from college for spring break), he walked in on his father having relations with a woman who was not his mother. This is contributing to his anxiety about becoming more deeply committed to Amy (worrying that he might hurt her later), and it also explains why he knocks three times before opening a door. 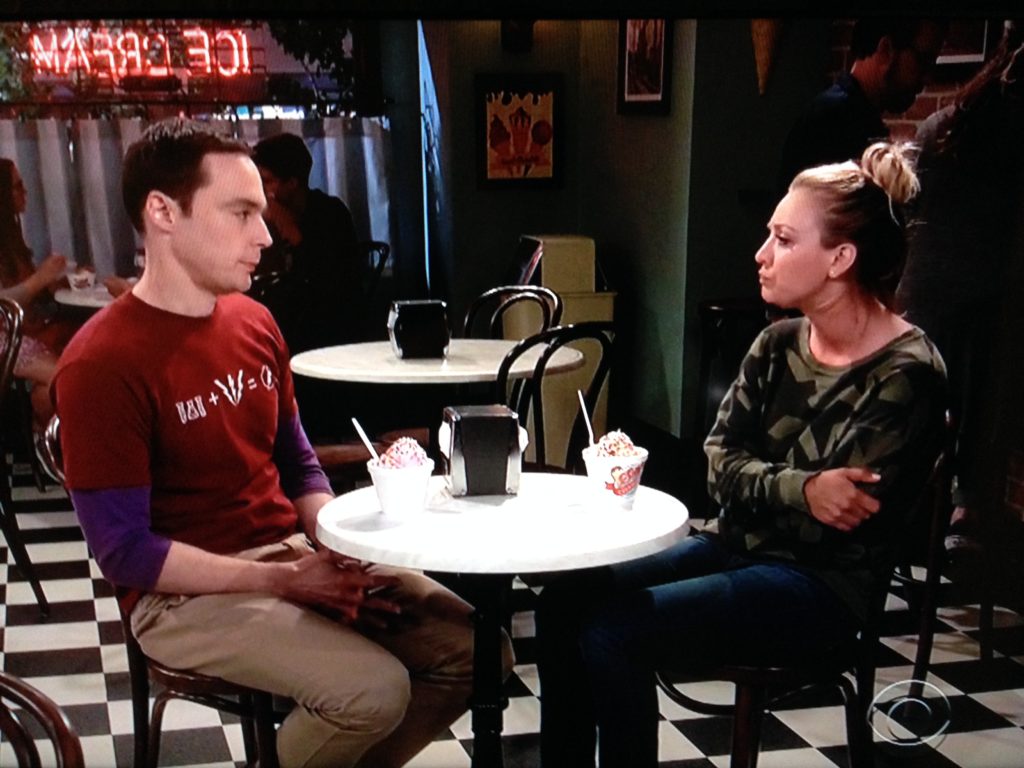 Penny counsels him to stop worrying about future hurts he might inflict on Amy and address the pain he’s causing her now. When they return to the apartment, he apologizes for his behavior, exempts Amy from the bathroom schedule and, with a degree of ceremony and Penny and Leonard as witnesses, agrees to share a toothbrush holder with her. 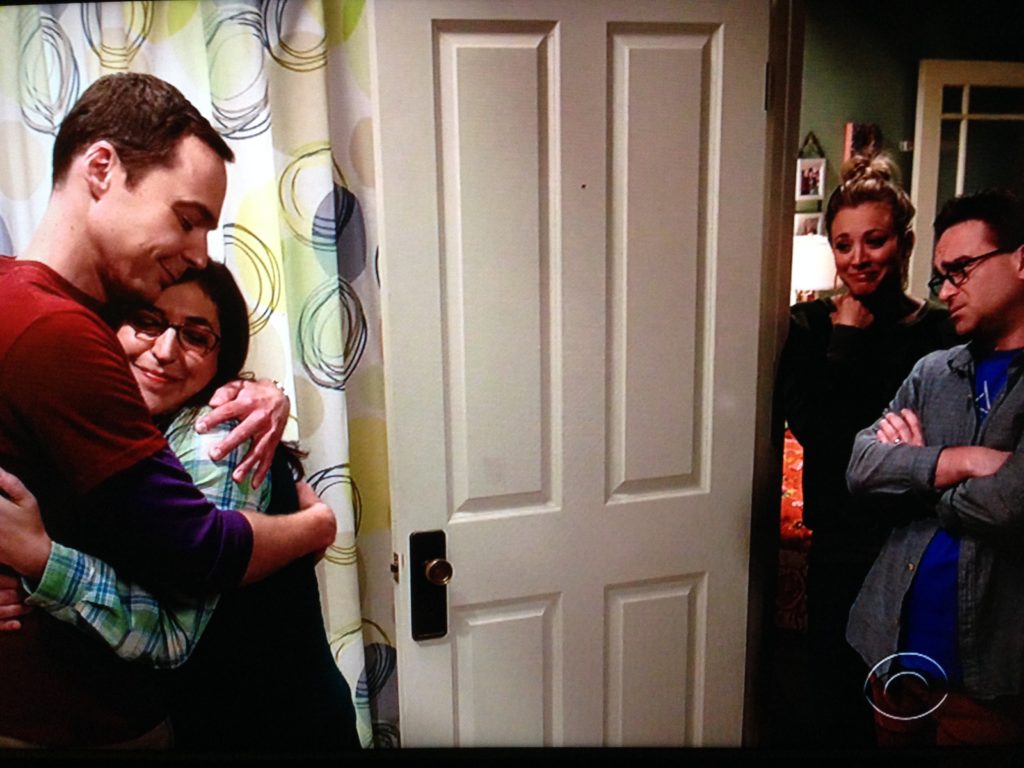 Meanwhile, Bernadette (Melissa Rauch) and Howard (Simon Helberg) are about to take a short getaway to Palm Springs, but her morning sickness is making her so miserable that instead they decide to secretly stay home and relax. While he’s massaging (and occasionally pulling magical quarters from) her feet, they hear a noise downstairs and become frightened. 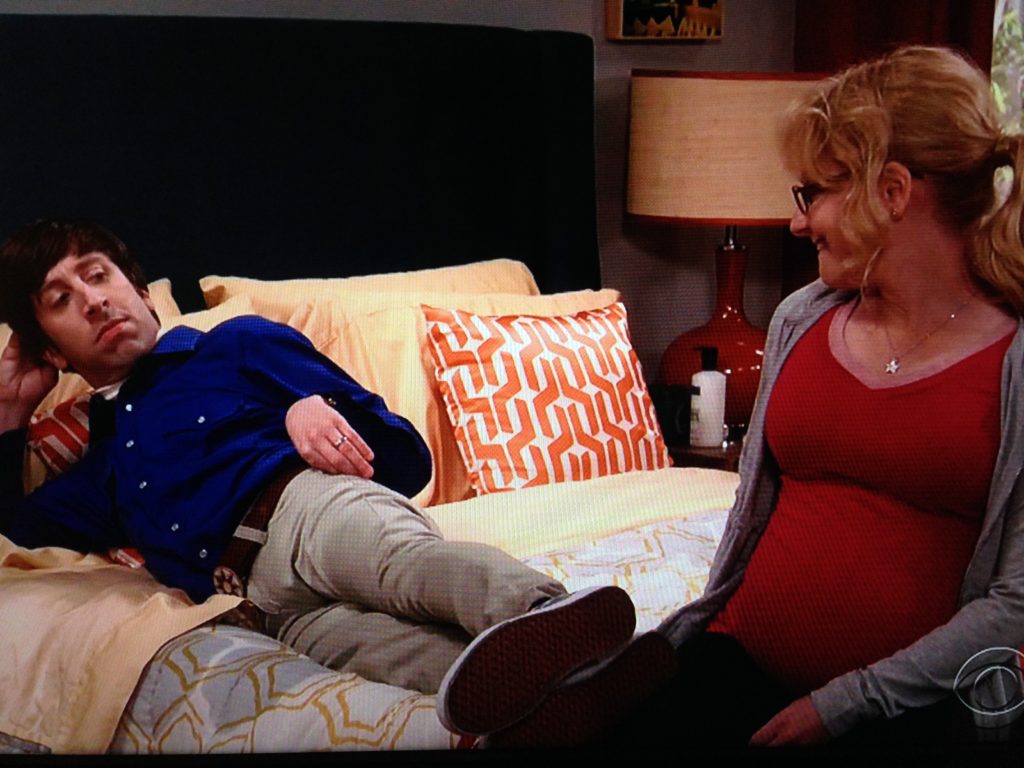 The noise, unsurprisingly, is Stuart (Kevin Sussman). Howard had told him they’d be leaving town, and Stuart has used the key they never retrieved from him to enter their home so he can soak in the hot tub. (A thing he apparently does with some frequency.) 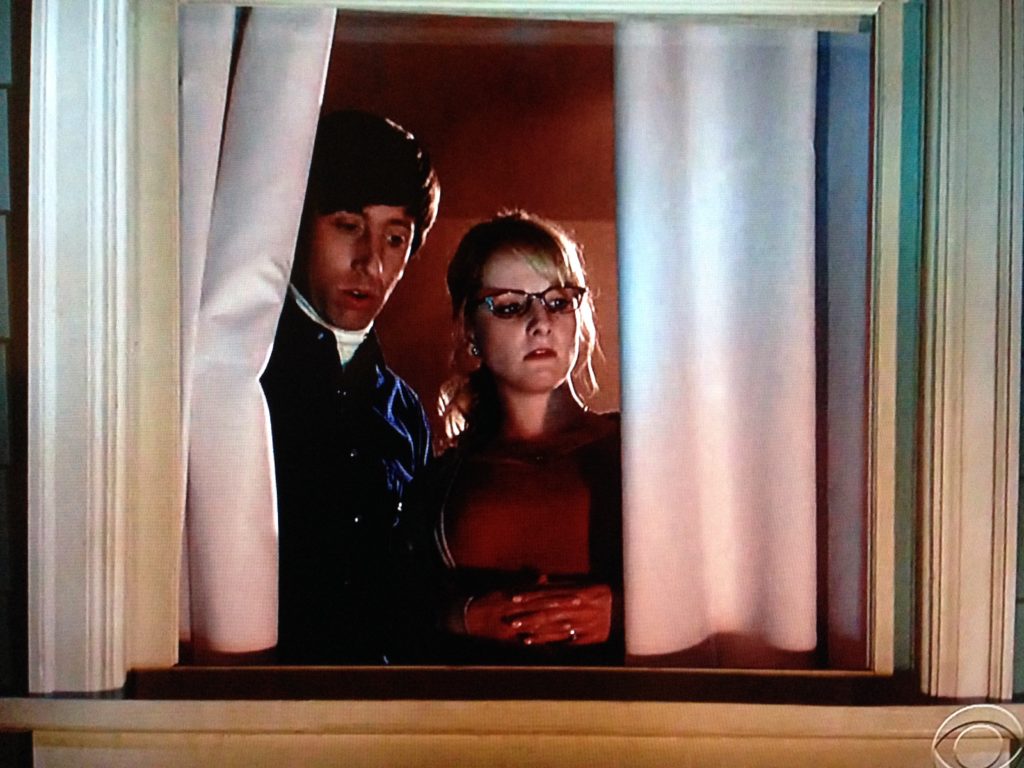 Howard and Bernadette watch him for a while, wondering aloud if the soothing nature of seeing him float below is why people get fish tanks, when Raj also enters their house without permission. Spooked, Stuart disappears.

Raj (Kunal Nayyar) eases into the already-on hot tub with a “borrowed” bottle of wine and gets a scare when Stuart surfaces from the bubbles. 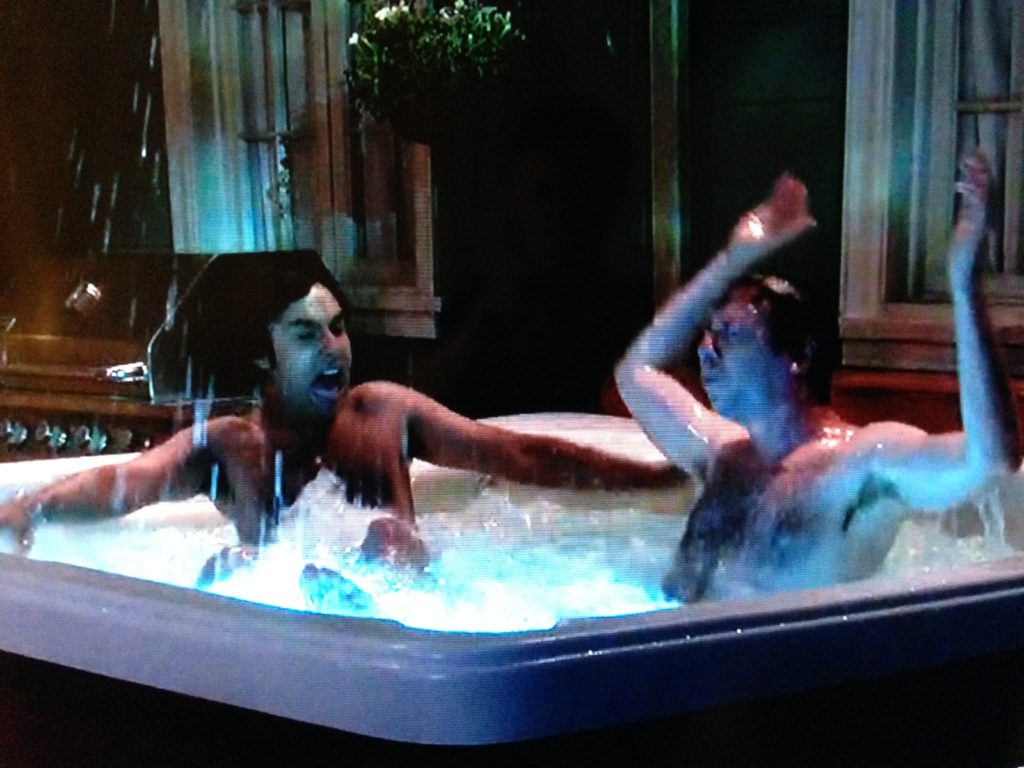 The two leftover friends bond over their lack of Friday night plans, share some wine and talk openly about things like Stuart’s inability to pay his home electricity bill and Raj’s having been dumped by both of the women he’d been seeing. (Moment of substance #2.) 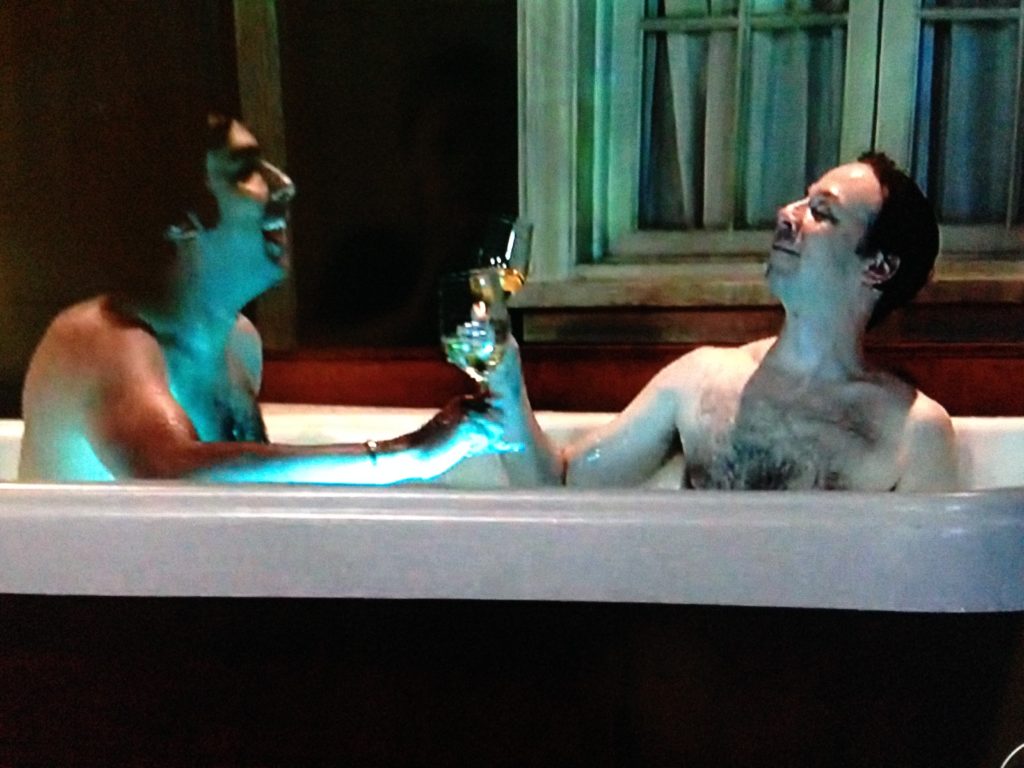 Bernadette and Howard watch and eavesdrop, unhappy to learn that Raj hadn’t shared his singledom with them until they remember that he’s broken into their home and stolen their wine. They finally reveal themselves when they overhear Stuart admitting that he is nude, yelling down to the hot tub bandits that they’re jackasses.