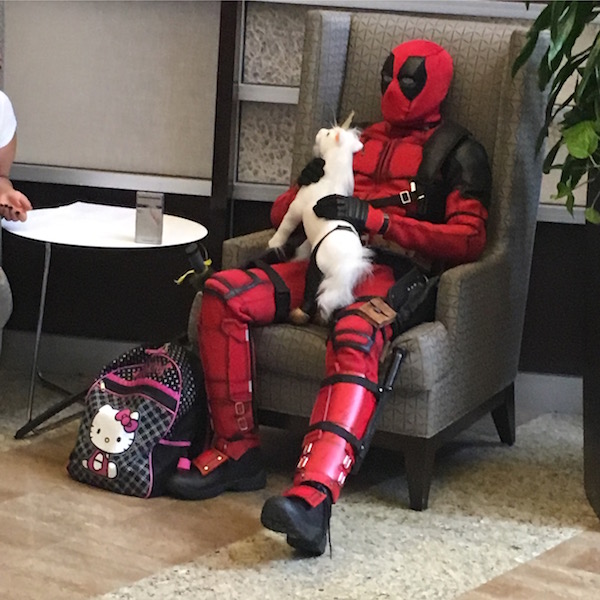 Oh my goodness! Dragon Con is definitely the mecca of all nerd cons, for me. My Dragon Con 2016 was amazing. Incredibly busy but amazing. I had five panels with topics ranging from podcasting to Star Wars Counseling plus two live podcasts. The first, Booze and Phasers, was the show’s first recording outside our living rooms and ended with hilarity and public intoxication at one in the afternoon – but this is Dragon Con, remember, so there is no time keeper! The second podcast, 5 Truths and a Lie, was standing room only with over 700 guests and an insane cast of storytellers: Roger Cross, Gigi Edgley, Anthony Lemke, Eddie McClintock, Amber Nash and Melissa O’Neil. Both episodes will be live next week.

RELATED: The Best of “Overheard at San Diego Comic Con” 2016

Here are some of my favorite “Overheard at Dragon Con” quotes from Dragon Con 2016.

Still laughing at the male Eleven cosplayer I overheard going up the stairs to the Pulse who said “Don’t look at my upside down!” #dragoncon

“His Bear Grylls costume is like Oh My God!” #overheardatdragoncon

“Where do I go to peace-bond my baseball bat?” -Harley Quinn#OverheardAtDragonCon@DragonCon

“He just stuck that bird in his ear” #overheardatdragoncon #Masquerade2016

Keep your wand in your pocket. #overheardatdragoncon

#OverheardAtDragonCon So hypothetically speaking, would you be mad if I had slept with her friend who you were hitting on?

“Lawd Jesus the alcohol is hitting me.”

Overheard in the Hilton hallway
“You took the elevator…at a CON!!”#DragonCon

Overheard at #DragonCon: “I love your codpiece.”

Her name is Ursula and she f***ed my husband for 5 years! #overheardatdragoncon

Things overheard at DragonCon “If you have weapons I need to see them!”. “Glitter side out people!”. #DragonCon2016

“I danced to Prince’s ‘1999’ on New Years Eve 1999. But did you know that song was already old by that time?” #overheardatdragoncon

Overheard at #DragonCon: “I wish the cosplay were more understated.” Lady, pretty sure you’re on your own in that wish.

Overheard at DragonCon: “After all, you did buy a dragon without my permission.”

“Has anyone tried virtual reality before. I’m working on a sexy game” #overheardatdragoncon

“Seductively enjoy the trash can” #overheardatdragoncon

#OverheardAtDragonCon – How many debit cards would you have to steal before you found one with 1701 as the PIN number.

(Guy announcing to people in Exec Lounge area) Hey – It might get loud…. TIME FOR A PANTS OFF, DANCE OFF PARTY #OverheardAtDragonCon

#OverheardatDragoncon That’s not how it works, you can’t hold hands and care bear stare down a storm.

It doesn’t help that some dude overheard us discussing after and said “it’s #DragonCon, make friends with strangers!”.

Overheard at the ‘Con:
“The bubbles tickle my throat”#DragonCon2016 #DragonCon #nerd

Overheard while watching @DragonCon parade on @ATLCW: “Heroes in a half shell? Shouldn’t they be oysters?”😂 #TMNT #DragonCon2016

“I was ready to waltz, you fuckers.” things overheard at @DragonCon#DragonCon2016

RELATED: The Best of “Overheard at San Diego Comic Con” 2016