BATMAN MUST BE HOLDING BACK, NO?

Upon telling people that I saw “Batman Vs. Robin” at WonderCon in Anaheim, many respond, “You mean the one with Adam West and Burt Ward?”. They’re all excited because West and Ward have signed on to voice an animated Batman and Robin film due next year. Will it be campy? I imagine, why else get Adam West?

But “Batman Vs. Robin” follows a different animated lineage. While DC Comics has been playing catch-up to the live-action Marvel Cinematic Universe, DC’s animated films have delivered strong stories and quality animation consistently. That continues with “Batman Vs. Robin”, a title that didn’t get me too excited (who wants to see these guys go against each other?). 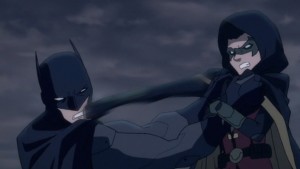 J.M. DeMatteis, adapting the script from comics by Grant Morrison and Scott Snyder has more in mind than a simple argument between The Dark Knight and his kid, and complexity is what always wins in a superhero story. The Robin in this story isn’t Dick Grayson (who does appear as Nightwing), but rather Damian Wayne, Bruce Wayne’s son. Batman teaches Robin to follow a “Justice, not vengeance” mantra when it comes to crime-fighting. This mantra is tough for young, tenacious, angry Damian to follow, especially when he’s tasked to free child slaves from a villain called The Dollmaker.

The idea of foregoing vengeance for something noble is an impressive feat for Bruce Wayne, still constantly haunted by the murder of his parents (there is rarely a story of Batman where this event doesn’t show its face). But elsewhere in Gotham City is a vigilante group known as The Court of Owls who would love to take Robin under their wing, and since they dispense a colder, more permanent style of justice, Robin is intrigued, bringing him to blows with Batman. 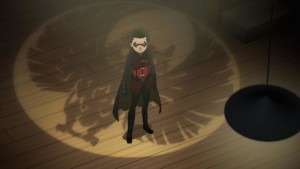 The themes (and action sequences) are decidedly adult. I find it interesting that animation, a style so often paired with children, is successfully doubling-down on telling sober tales full of mature subject matter, yet more and more live-action adventure movies feel the need to include an often unnecessary over-the-top humorous element. “Batman Vs. Robin” is DARK, and creepy. The Dollmaker alone could give you nightmares, only to find out he’s voiced in a bit of stunt casting by “Weird Al” Yankovic.

That’s the only notable name in the cast, which gets fantastic work out of more work-a-day animation talents (although Jeremy Sisto shows up as Talon, the most aggressive member of The Court of Owls). Previous DC films have featured Nathan Fillion, Cary Elwes and more. Here, the best work is done by Stuart Allan as Robin, not so much a name, a young kid voicing beyond his years. Allan continues the hot streak of child actors doing fine work in the movies. 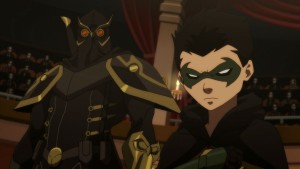 The only other one of the DC animated films I’ve seen is “Justice League: Flashpoint Paradox”, a movie that made THE FLASH interesting! To me, making Robin interesting is just as much of a challenge, and that’s accomplished in “Batman Vs. Robin”. But the finale, although action city, does muddle up Batman’s mantra some, and The Talon’s final, fatal point to make to Robin about how justice should be dispensed doesn’t have the gravitas I think the filmmaker’s hoped, nor is it given the proper framing to land more heavily.

But it beats the DC live-action missteps “Green Lantern”, “Catwoman” or “Superman Returns”. These animated entries into the DC canon aren’t skimped on, the score and scope are impressive and not to be overlooked if you love superhero movies.

“Batman Vs. Robin” is be available on Digital HD & Blu-Ray/DVD formats.