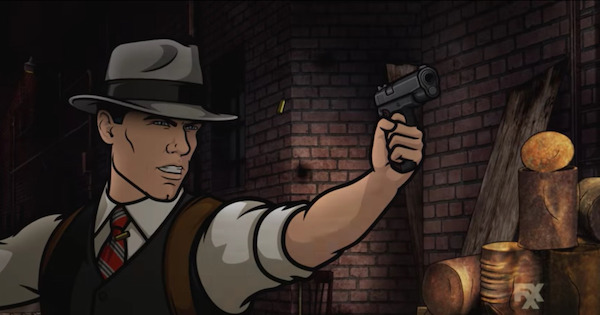 Archer opens inside a hospital. Our main character (H. John Benjamin) is in a coma which is stretching into its’ third month. The rest of the team attend a funeral service for Woodhouse, who recently passed away. However, Archer’s faithful mother Mallory (Jessica Walter) remains at his bedside. The camera pans slowly to his face as Mallory asks, “Who knows what he’s dreaming about?”.

It turns out, Archer’s mind is trapped in the 1940s. Archer, Cyril (Chris Parnell) and Pam (Amber Nash) are classic, hardboiled detectives. They huddle around Woodhouse’s body which lies sprawled in an alley, riddled with bullets . It seems Woodhouse was Archer’s partner, and Sterling is the only person who can find his killer.

Later, Archer meets up with Krieger (Lucky Yates) and holds up a picture of Woodhouse. It turns out, Krieger was the elderly man’s dope dealer, and Woodhouse was Krieger’s best customer. Woodhouse even paid in advance… It seems he wasn’t very good with money.

That night, Archer meets a mysterious femme fatale while he drinks in a swanky nightclub. She goes by the name “Mother”… yes, that’s right. It’s Mallory Archer. While the two talk, they set up the back story of this particular universe. Sterling is a distinguished WWII veteran and a PI. However, like every private investigator, Archer needs work. It just so happens, “Mother” has a case.

However, Archer is far from thrilled when he learns Len Trexler is his target. Sterling may have guts, but he wants to keep them inside of him, thank you very much.

While they talk, the nightclub’s singer takes the stage. Archer watches intrigued as the singer turns out to be Lana (Aisha Tyler), who delivers a sultry version of “Fever”.

Archer eventually ends up heading straight into “the belly of the beast”. He tells us this in straight, hardboiled narration as he drives to Len Trexler’s hideout in Long Beach. It turns out, Archer is narrating to a dog he picked up on the side of the road… Here’s hoping the dog is going to Long Beach. In a fitting wink to this season’s noir inspiration, Sterling openly sips from an old-fashioned as he drives.

Later, Archer arrives at Len Trexler’s dock hideout. He continues narrating to himself as he works. He climbs onto a shipping crate as he watches groups of women loaded into a truck. However, his train of thought is interrupted by Pam. One thing leads to another, and the two end up falling into one of the trucks. There is a scuffle. As they fight, Sterling repeatedly flashes back to his time during the war. Luckily, they come out on top after Archer once again outsmarts and maims one of the gangsters on the truck… who turns out to be Barry.

As the truck of rescued Chinese women wave goodbye to Archer, he resolves to go have a drink… or 12. However, he returns to his office to discover it has been tossed. Even worse, he receives a call from a royally peeved Mother.

As the episode comes to a close, Archer receives a visit from yet another mysterious femme fatale. This is heiress Charlotte Van Der Tunt (Judy Greer), and she wants to hire him. She looks Sterling over as she clutches a cigarette holder, “I want to hire you, to murder me!”.