Arcane Wonders’ Royals – No Tigers On A Gold Leash, But Still A Great Game 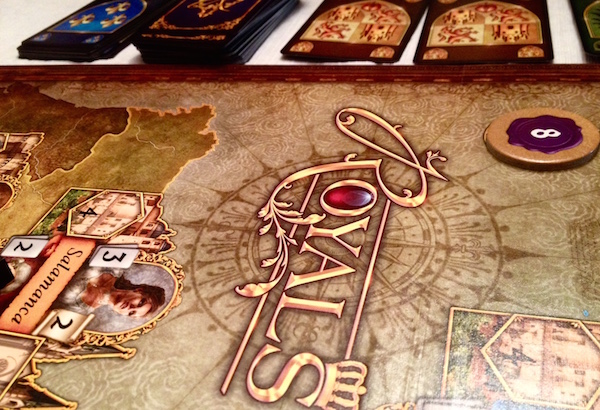 I had heard some buzz from my “in the know” gamer buddies about a game called Royals, and I became intrigued (pun intended). I love deep strategy, I love rules that make sense, and victory conditions that are not mind boggling. Word on the street was that this game brought all of those to the table in a pretty, Euro-style package. So, when I heard Royals’ second edition was coming out this year, it was on my short list of must-haves. Well, I got it yesterday and played it yesterday. Like to hear about it? Here it goes. 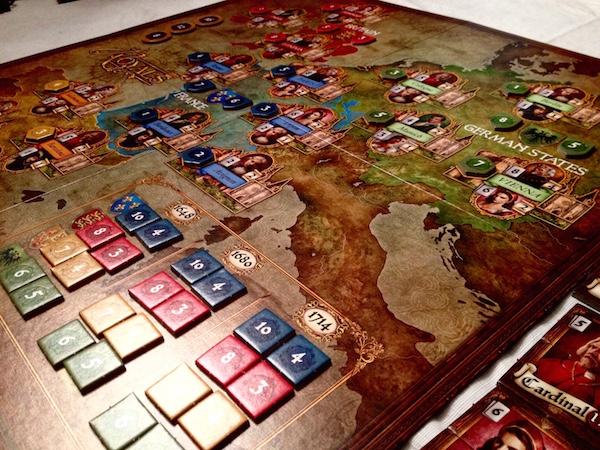 Royals is designed by Peter Hawes and can accommodate 2-5 players. The game is supposed to take 1-1.5 hours to play, and my two-player, first play game took about 2 hours. Royals sets the participants in 17th Century Europe. Everyone is trying to establish the greatest influence over the nobles of Britain, France, Germany, and Spain. The player who establishes the most influence at the end of 3 eras wins the game. That quickly sums up the theme of the game. Nobles + Influence = Victory.

So what do you actually do in the game? Glad you asked. Each player has at least 36 tokens (46 in a 2-player game) to place out on the beautiful game board in one of the four countries on the map over the course of 3 rounds. Each country is divided into cities, and each city has 1 or 2 nobles in them. There are 7 different types of nobles, ranging from the lowly (but still Royal) Marshal all the way up to the King. Each noble is worth a certain amount of influence if your cube (I call them diplomats) occupies that city. See, Royals is an area control game, but each noble can only be controlled by a single player’s cube at one time. Players can use intrigue cards to bump an opponent’s cube out of a spot and replace it with their own, if they have the correct type and number of cards to do so. This gives the game a bit of a mean streak, and in a more direct way than the normal passive/aggressive Euro game style. Feelings could get hurt here. 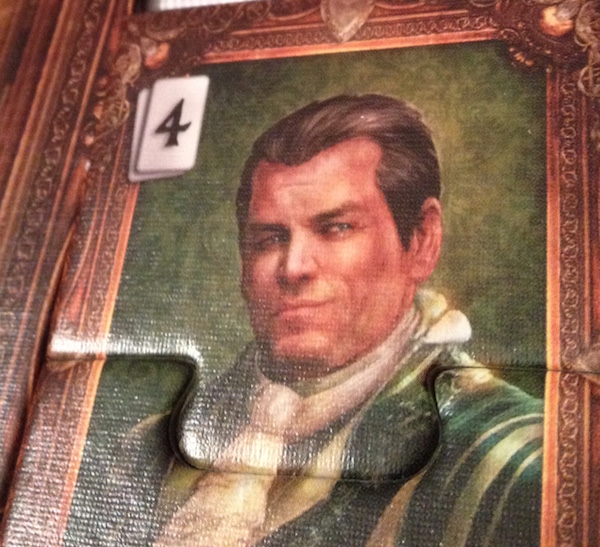 Each turn, players must draw 3 cards from the countries deck, or one card each from the countries deck and intrigue deck. Country cards simply have one of the 4 countries’ colours on them, sort of like the tickets in Ticket To Ride. (The extra “u” in colors was intended for some Euro flavor). Intrigue cards have two different countries on them. Once a player has collected enough country cards matching the influence number of a noble on an empty city location she wishes to occupy, the player simply discards those cards and places a single wooden cube on that space on the map. That player then places a second cube on the portrait of that type of diplomat depicted on the 7 different portraits next to the game board. No matter which country they are in, all of the same type of noble share the same portrait. For instance, a Spanish princess and German princess look the same – a shout out to inbreeding? I don’t know… Regardless, this serves a design purpose because at the end of the game whoever has the most cubes on a portrait card gets bonus victory points. To bump another player from a spot on the map that is already occupied, the same rules apply, but in addition to having the needed country cards, you must have an intrigue card with a matching country symbol on it (two if you’re trying to bump someone off of the King). 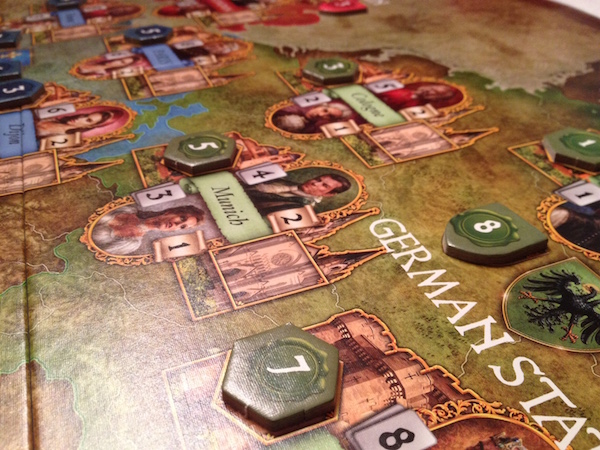 Play continues for three rounds. Each round ends when the countries’ draw deck is depleted. At the end of each round scoring occurs, with points being awarded for the 1st and 2nd most influence held in each of the 4 countries. There are some immediate victory points awarded during the game-play as well. These are usually for being the first or second player to do something – occupy a particular city, or ALL the cities in a country, or influence one of each of the 7 different types of nobles in the game. This race for finite victory points adds a sense of urgency and tension to the game that makes it extremely fun.

I played a two-player game with my wife, who is a tough competitor and hates to lose. The final score of our game was 163-162 and now my back is sore from sleeping on the couch. Every time I placed a cube on the board I heard, ‘Dammit!” I’m not sure about other player counts, but there was no chance to be complacent in the 2 player match. Every decision was tempered by the thought that it would be undone with an intrigue card at some later point, surrendering hard earned victory points to the opponent. For such a pretty looking game there is a lot of ugliness here. Bumping another player’s cube and replacing it with your own right before the round ends and grabbing the majority of victory points is dastardly, but necessary if you want to survive. And I guess that fits perfectly with the theme here. Court Intrigue SHOULD be assholish, right? 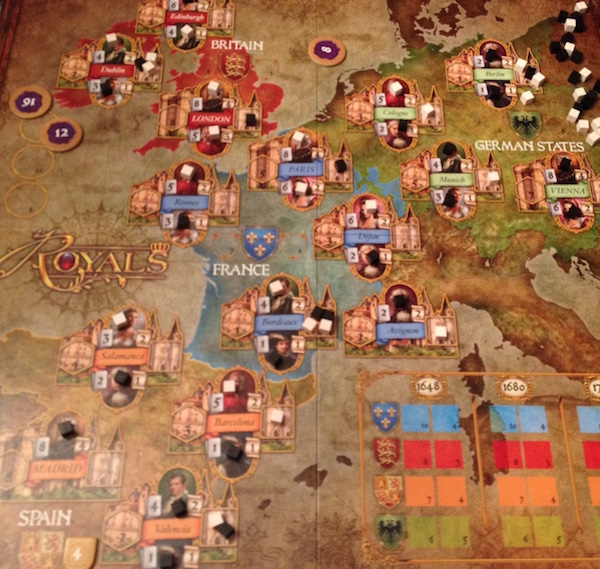 In the end, Royals completely met my expectations. It was easy to learn and easy to play, but it had tough decisions on every turn, with virtually no down time. Even when I had a second to breathe, I immediately found myself looking around the board and crunching numbers in preparation for my next turn. I really dug this game and am dying to play it again, as soon as I get some sleep!

Well, that’s it. Thanks for reading and keep on nerding on!

For this and other geeky games, check out www.dicedropgames.com