Home » Games » Anything You Can Build – 3 Favorite Civilization Building Games

Anything You Can Build – 3 Favorite Civilization Building Games

I love civilization building games. I was hooked back in 1991 when I played Sid Meier’s Civilization for hours on end on my PC with1 MB of RAM, and I’ve played pretty much every iteration of Civilization since. (Side note: I never imagined that I would ever need more than 1 MB of RAM) Since I got into playing board games about 5 years ago, I have been searching for the perfect civ building tabletop experience. There are some good ones out there, but three I have found stand out above the rest, and capture that Sid-like magic that has stood the test of time. 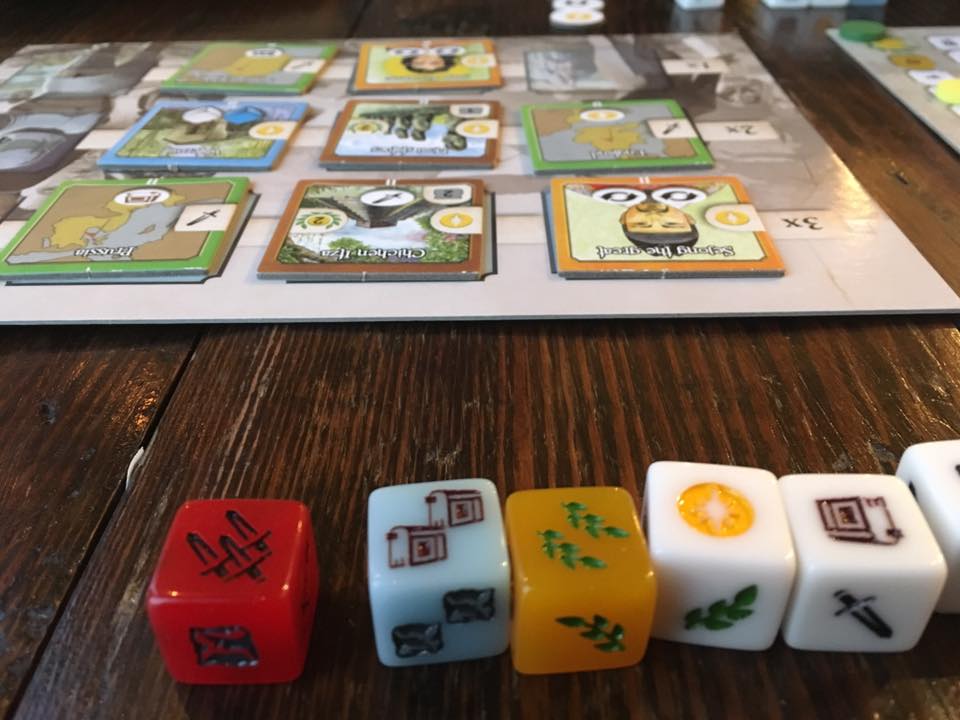 This dice rolling civ builder designed by Rustan Hakansson allows players to take a fledgling nation and develop it over four eras. It is based on a card game called Nations, its more time consuming and involved big brother. During each era players get to roll a number of dice which are used to purchase improvements for their civilization. These improvements are composed of buildings, city states, books of knowledge, leaders with certain bonuses, and wonders of the world. Improvements are your main mechanism for scoring victory points. While it sounds daunting, it takes about 15 minutes per player, so a full game usually takes an hour or less. Each era players take turns doing one action at a time. This keeps the game moving swiftly and allows players to remain engaged with little downtime. While there is a measure of luck (obviously, it’s a dice game) there is a lot of dice mitigation involved in the mechanics. Every player gets at least one “chit” to let them re-roll dice each era. Some of the bonuses provided by leaders also give you the ability to re-roll dice. Additionally, you can purchase different colored dice to increase your odds of rolling certain resources, like gold, food, swords, books, or stone. And if all else fails, you can spend any two dice to purchase a resource of your choice.

While every nation starts out the same, by the end of the second era, each nation begins to take on its own personality. If you find yourself with a bunch of red dice in your pool, you are probably a warring nation rolling swords and scoring victory points based on said swords. If you have a bunch of blue dice, you are rolling books and stone and are pulling away culturally from your opponents. Those with yellow dice are rich and able to buy some bonuses that others cannot. I’ve played the game dozens of times and there is sufficient smack talk and fake nationalistic rhetoric around the table worthy of FDR and Churchill. And most of the games are tight until the end. There have been some decent come from behind victories as well. But regardless, at the end of the game you should find yourself looking down at the board and feeling a sense of accomplishment. Not everyone can say they’ve built a flourishing nation in 15 minutes. 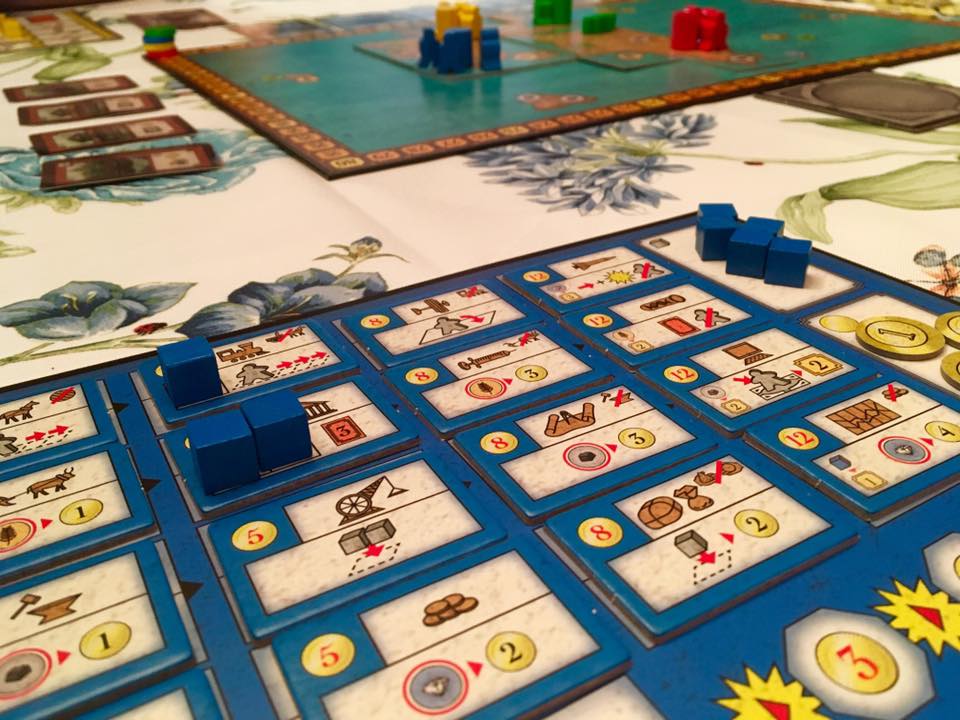 Designed by Luigi Ferrini, The Golden Ages is a euro style area control game where players use their meeples to explore a random world map, place cities (in the form of cubes), and use the resources they control in order to gain gold, develop technologies, and advance their civilizations. The player with the most victory points after four eras wins the game. The beauty of The Golden Ages is its tight mechanics. There is no wasted fluff in this game. When a meeple moves on to a sea space it becomes a ship. You don’t have to feed your citizens. War consists of paying money to remove an opponent’s cube and/or meeple from a space you occupy. Each player can only declare war 5 times a game and the cost increases every time. Additionally, the aggressor gets a random token consisting of VP that is hidden from the rest of the players and scored at game’s end.

It may seem from my description that The Golden Ages is too simple of a game, but while the mechanics are simple the choices are meaningful and tense. Players only get three meeples each era and it always feels like you have less than you need. Also, the first player to pass (you take no more turns this era) gets a couple of important bonuses; 1) getting to choose which scoring bonus is used that era, and 2) two coins every time their turn would have come up. So even though there are plenty of tasks that don’t require meeples, it still doesn’t behoove you to take your sweet time. All in all, The Golden Ages has been a blast every time I’ve played it, win or lose. And while I am not usually a huge euro fan, the combination of the civ building theme, the lack of a “point salad” at the end, and the swift play time make this a favorite of mine. I have not tried the expansion, Cults and Cultures, yet, but I am looking forward to it. 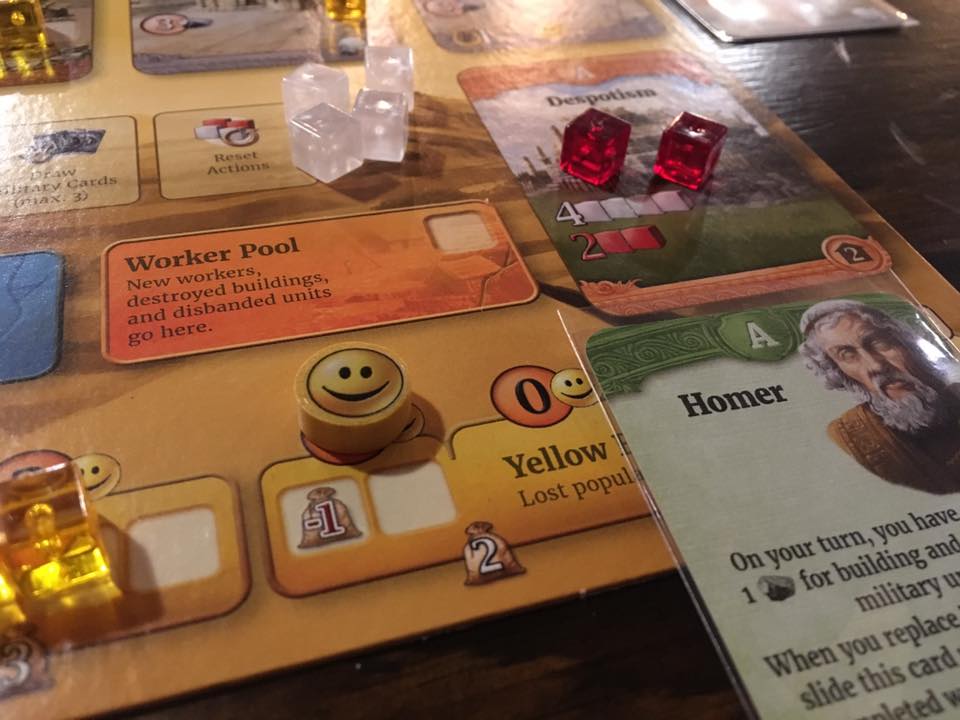 3) Through The Ages: A New Story of Civilization, Czech Games, 2-4 players, 5 hours.

As I mentioned earlier, I played a lot of Sid Meier’s Civilization computer game. In search of the same table top experience I started with the board game of the same name published by Fantasy Flight Games. After two tries I found that it was fine, but just not the same for me, and I’d rather play it in video form. So, I still had an empty spot on my gaming table for that special game that would give me the same sense of fulfillment that Sid Meier provided. Enter Vlaada Chvadil’s Through The Ages: A New Story of Civilization. 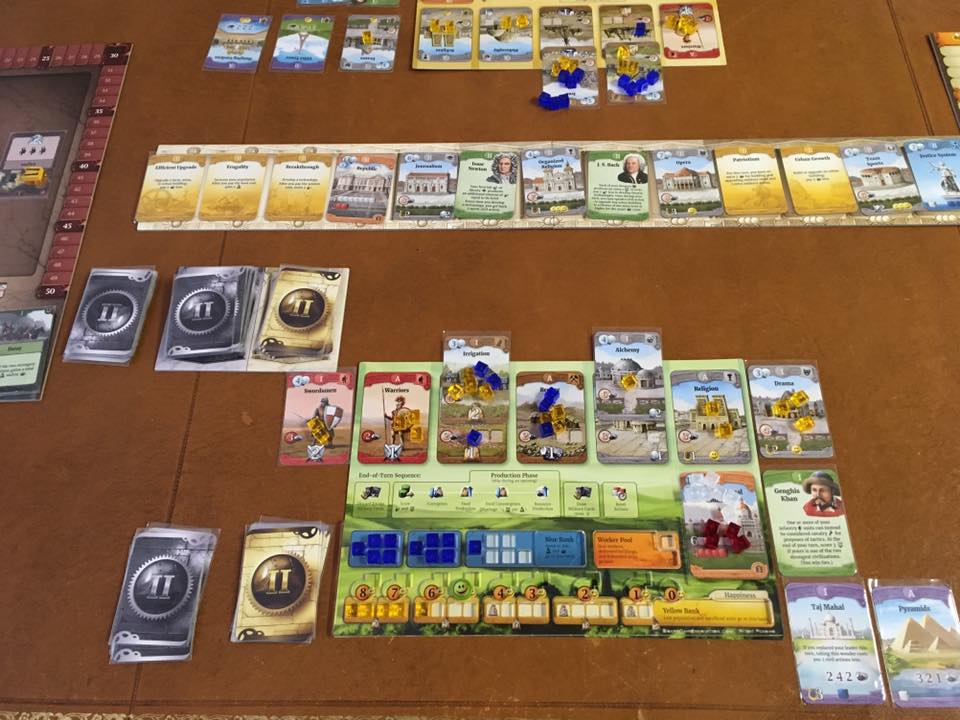 Through The Ages is not for the light gamer. While the numerous rules make great sense, they take time to grasp. TTA is not a candy pop song, but more of an epic progressive rock masterpiece. I was willing to spend time with the rules and I am so glad I did. Most of the game takes place via cards that continuously pass along a track. Players use civil and military actions to choose cards and use them to form their civilizations. Unused cards fall off the track and are gone forever. Because of this, any given game could see leaders like Alexander the Great and Winston Churchill pass through time without ever existing (no one claims them). The same goes for technologies and wonders of the world. The game really evokes the fluidity of history and allows each game to tell its own story, very much like Sid Meier did. In my mind, the track represents Time, and by snatching bits and pieces thereof, players form an alternate history to our own world, carving out their own civilizations that rival Earth’s. That may seem a bit too profound, but I think that is what makes playing TTA one of the best gaming experiences that I could ever want. And it keeps me dying to play “one more turn.” If this sounds even remotely interesting, you should really check this game out. For an excellent “how to” video check out:

Well, there you have it. I hope this whets your civ building whistle and gets you to try out these games if you haven’t. Thanks for reading, and keep on nerding on.

Obi-Wan Kenobi series is reportedly on hold at Disney+.
https://www.geekgirlauthority.com/disney-puts-star-wars-obi-wan-kenobi-series-on-hold/

Ever wonder what a normal life looks like for the Winchesters?
https://www.geekgirlauthority.com/supernatural-recap-s15e10-heroes-journey/

The Soul Squad discovers that all is not well in paradise while Michael takes on a new task in this week's episode of The Good Place! https://www.geekgirlauthority.com/the-good-place-recap-s04e12-patty/