Home » Stuff We Like » Anaheim’s Chance Theater Is Utterly Charming

This weekend I attended the Southern California premiere of Will Eno’s Middletown at the Chance Theater in Anaheim, CA. It was my first experience with this theatre, which had been described to me as “probably what South Coast Repertory was like in 1969.” I knew that the performance space was going to be intimate, and that the play was inspired by Thornton Wilder’s Our Town, but that’s as far as my foreknowledge extended.

I’ll be honest: I didn’t love the play. I don’t want to go on about that, because I think it was more personal preference than any great flaw in the material. However, since it was the only part of the night that I felt lukewarm about, I decided I would go on about everything else for a bit.

From the outside, the Chance Theater is relatively unremarkable. The sign is cool, but the building is nondescript and gives no hint of what the experience within will be. As soon as we walked in the door, though, the gracious staff immediately began coloring in a vivid and positive impression of the place.

Everyone in the petite lobby was outgoing and friendly. The gentleman who printed our tickets, the other staff members on hand to welcome the audience and the darling bartender radiated the kind of cheer that says clearly that they’re happy to be where they are and happy people have come to join them there.

The lobby bar had the essentials, and because the venue was small, the crowd was small. That meant no real lines for the bar (or bathroom), which is a bummer at larger theaters and eats into pre-show and intermission time.

My guest and I were seated in row F of the Fyda-Mar Stage– the last row. In other small performance spaces, I’ve felt uncomfortably closed in and conspicuous– the room is dark and small, and the actors can definitely see you back. In this setting, I was remarkably comfortable!

I loved our seats, which had the benefit of the wall being directly behind them, so we could rest our heads. There was plenty of leg room– something I’ve lamented the lack of at other theaters– and I could easily cross and uncross my legs. (I’m tall enough that this is a huge luxury.) The AC was gently wafting a refreshing breeze that kept me alert without freezing me, and the audience was allowed to bring their drinks in with them– something I love.

I’d estimate that the room was about 20′ x 20′, more than half of which was seating. Because of this, the set either needed to be minimal to the point of mime, or extremely versatile. The production team went in the latter direction in a way that really impressed me, with a set that looked almost like a patchwork quilt of suggested spaces and effective projections that extended the physical boundaries so broadly that we were literally in outer space at some points. 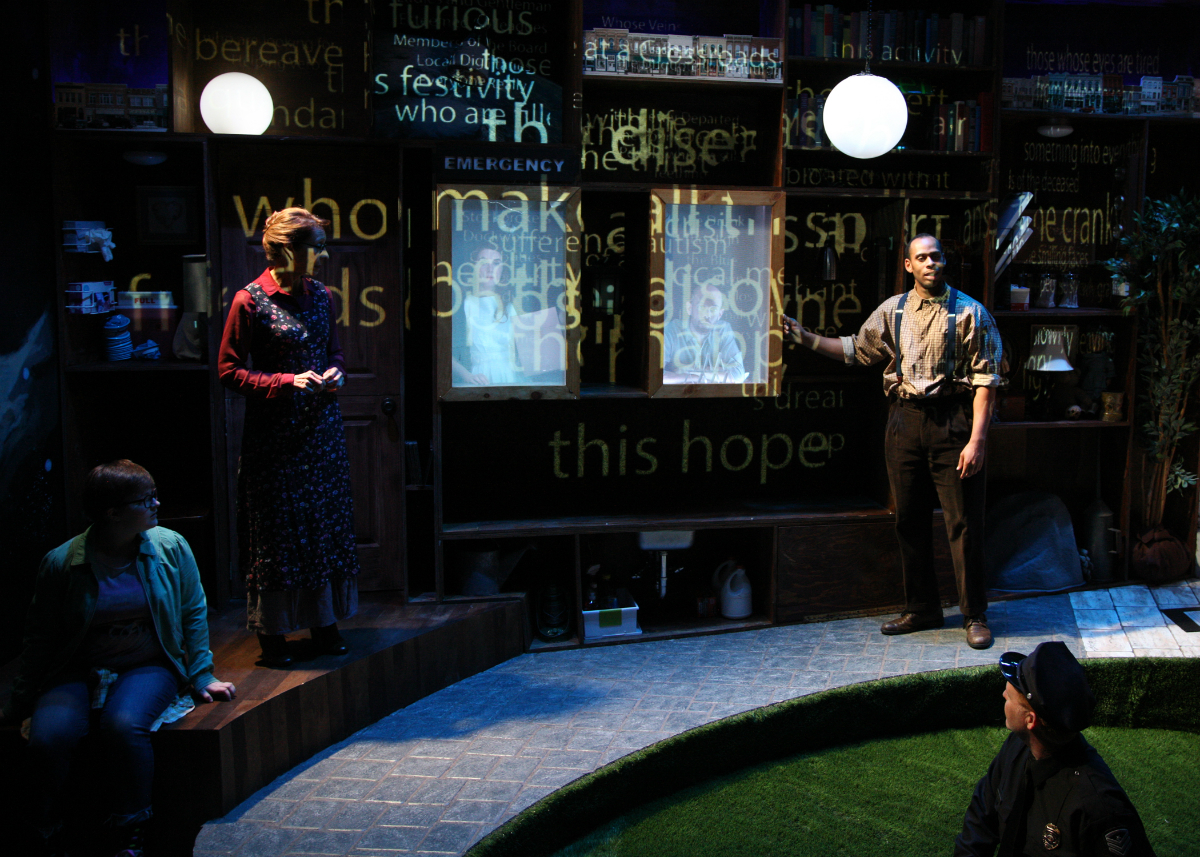 The cast of the So Cal premiere of MIDDLETOWN, playing thru May 21 at Chance Theater

My friend and I recognized three of the show’s eight actors from a production of Rosencrantz and Guildenstern are Dead that we’d seen at the American Coast Theater Company last summer, and it made me feel like I’ve really come home to the theatre in Orange County. Recognizing actors from production to production and theatre to theatre, and getting to know their talent better by having a body of their work to reference, feels sweet.

The night before attending this show, I had the pleasure of seeing Harry Potter and the Chamber of Secrets in concert at the Segerstrom Center for the Arts, with the Pacific Symphony playing John Williams‘s score for the film live. It was amazing, and my seats were wonderful– right in the center of the orchestra section. When we arrived, we paid $10 to park. Then I waited in line for a while to buy drinks, inconvenienced almost 30 people by scooting past them on my way to my seat, stood in line for the restroom for most of intermission and joined a throng of people leaving the parking structure at the same time when the show ended– none of which I’m sharing to complain. But the contrast with pulling up to a free space outside of Chance the next night, mingling with the other 50-ish audience members in the cozy lobby because we had time after no bathroom lines and hardly a bar line, and leaving without waiting in a crush of cars, highlighted the fact that the stakes are far lower for a show to be perfect when the experience of attending it is.

I didn’t need to love this play to love seeing it and to feel excited about returning to this theatre. And I don’t need to love Middletown to encourage you to see it (you’ll probably like it a lot if you like Our Town), if only to see what I mean about the Chance Theater being something special.

Middletown plays at the Chance Theater until May 21, 2017. Visit chancetheater.com for performance dates and times, as well as to purchase tickets.