THE AMERICANS Recap: (S05E12) The World Council of Churches

The episode opens with Paige (Holly Taylor) helping Pastor Tim (Kelly AuCoin) and some anonymous church friends with something related to the food pantry. Paige and the pastor are soon alone together, and he confides in her that he’s accepted a job that came from out of the blue. He and his family will be moving to Argentina for his new position with “The World Council of Churches.”

When she comes home, Paige finds Philip (Matthew Rhys) and Elizabeth (Keri Russell) in the kitchen, cleaning up after dinner. She tells them what she just learned and asks them a few questions about how they made it happen. Then she removes the cross necklace she always wears and casually drops it in the kitchen trash.

Her parents are stunned, and Elizabeth fishes it out and follows her to return it. Poor, hopeful Paige’s eyes communicate soon-to-be-dashed wonder at her mother returning the cross– maybe Elizabeth doesn’t want her to throw the religion baby out with the Pastor Tim bathwater? But, alas. Elizabeth just wants her to keep wearing it until the pastor is gone in two months. 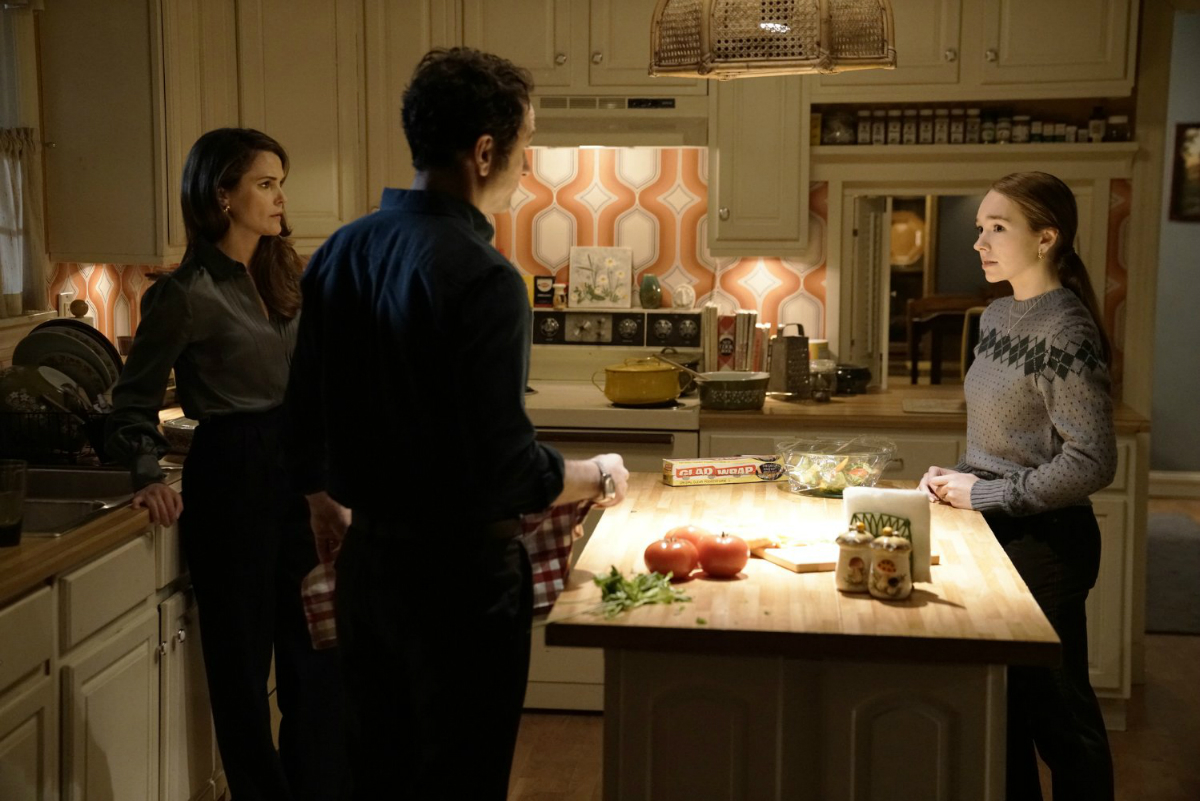 Sometime after this, Philip and Elizabeth meet with Claudia (Margo Martindale) in the safehouse and thank her for making the job for Pastor Tim happen. Then they tell her that they’ve been thinking about ending their tour in the United States. Claudia tells them that in her experience, officers who are thinking about going home are usually ready for it. She says that when they’re ready to go, she’ll alert the Center and have them start getting things ready. Then she says that it will probably take the kids three or four years to get used to living in Russia.

Afterwards, Philip and Elizabeth go to Pastor Tim’s office to congratulate him on the new job and give him a parting gift of a compass. (Is that all it is?) They tell him he’s been very important to their family, and, for better or worse, that’s true. Then they ask his advice about taking the kids home to Russia. He confirms with them that at this point Henry (Keidrich Sellati) doesn’t know anything. Then he says that on the one hand, taking them now will be extremely difficult for them. On the other, waiting until they’re out of their teens will mean that it isn’t Philip and Elizabeth’s decision anymore.

When they get home, Henry and his maybe-girlfriend Chris (Mavis Simpson-Ernst) have prepared a feast for the family. Chris can’t stay, but Henry is eager to thank his parents for being cool about letting him go to boarding school (if he gets in). When Paige comes down to dinner, she tells them, too, how great she thinks it is that they’re letting him go. Their masks waver for long enough for Paige to suspect there’s something they aren’t saying, but they dismiss her concerns and head to the table.

The next morning, Philip and Elizabeth come into the kitchen to find Paige finishing her breakfast and Henry already away to school with Chris. Paige tells them that she slept through the night for the first time in forever– that knowing Pastor Tim will be leaving and she won’t have to fake her way through a relationship with him anymore has lightened her mental/emotional load considerably.

She asks them more questions about their jobs– where their names came from and whether they feel like Philip and Elizabeth Jennings are their real names now. They say yes, but Philip qualifies it with saying he misses his old name. Hmm…

When they aren’t at home with their real family, Philip and Elizabeth finally get some time to spend as the Eckerts. Elizabeth is clipping coupons with Evgheniya Morozov (Irina Dvorovenko), you know– as we ladies do, when Pasha (Zack Gafin) comes running in with a black eye. Evgheniya tries to get him to tell her what happened, but he refuses, and she confides in her “friend” that she’s been begging her husband to take them home because of what’s happening with Pasha at school, but her husband won’t budge.

Elizabeth takes this intel back to Tuan (Ivan Mok) and Philip, and they agree that they need a new plan. Tuan takes things into his own hands and encourages Pasha to slit his wrists and leave a suicide note pointing the blame at his misery in the U.S.– with the expectation that Pasha’s parents will discover him within minutes of him doing it. Tuan feels like this plan will work whether or not Pasha survives, and he’s OK with that because he is TWISTED.

Philip and Elizabeth are on their way to see Tuan, talking nervously/excitedly about how their kids will acclimate to Russia and what their names should be, unaware of the new plan in the works. Thankfully, they find out about it just ahead of the designated wrist-slitting time and quickly decide it’s too risky. When they try to get Tuan to put the brakes on over the phone, though, it just rings.

While they march around the corner, Philip purposefully in the lead, to make sure something terrible hasn’t happened, Paige is at home rigging a makeshift punching bag in the garage to practice her fighting moves all by herself.

Meanwhile, in Russia, I’m worried about Oleg (Costa Ronin). He finally finds out why the KGB has been harassing him: they suspect that he leaked information about William to Stan (Noah Emmerich), because William was an operation Tatiana was responsible for, and they know Oleg and she were sleeping together. (Since he did leak this information, he’s starting to sweat.) At the same time, he finds out that the blonde manager of the world’s most depressing grocery warehouse is on her way to prison for her role in the corruption Oleg’s been investigating, despite him and Ruslan (Ravil Isyanov) having given her the impression that her cooperation would be her safeguard.

Oleg pleads with his boss to help get her off, which ultimately works. Oleg even returns to the depressing grocery warehouse (where Martha is not waiting to become his friend) to confirm that she’s free and home. She is.

His boss is pleased with the work he’s done on the case, and they’ve decided to start going after the big fish. Once they begin moving towards their first big arrest, though, some higher-ups tell Oleg’s boss to “slow down.” The corruption really does permeate the whole system. The work they’ve done so far might be for naught.

Frustrated by all of this and scared about what might happen to him, Oleg has some touching moments with his parents.

First, when he finds her at home alone, he asks his mom (Snezhana Chernova) about what her time in the camp was like, and she tells him straightforwardly about the doctor she would sleep with to ensure her safety and that her physical needs (food, warmth, etc.) were met. She tells him that when he went to work for the KGB, his father was proud, but she couldn’t forget.

Then, when comes home from getting the bad news about the futility of his efforts at work, he finds his dad (Boris Lee Krutonog) having a drink in the living room and joins him. Without disclosing details, he’s able to share some of his burden with his dad and have the first nice father/son moment we’ve seen from them. They’re both righteous men, striving to steer clear of corruption in a system that runs on it, and Oleg doesn’t want his father to use his governmental power to try to help him. They have a drink, then Oleg leaves the apartment to walk Moscow in the dark. (And everything about this moment made me hold my breath that the wasn’t contemplating self-harm. Stay strong, Oleg!)

Also bubbling in this episode’s pot: Stan and Agent Aderholt (Brandon J. Dirden) get a surprise when meeting with their rookie informant Sofia (Darya Ekamasova): her new fiancé, Mr. Hockey Hero himself (Yuri Kolokolnikov). He presents himself as a man in love, eager to join his bride-to-be in their employ for the good of his new family, and he gives them an autographed photo of his hockey team. They take this back to Agent Wolfe (Peter Jacobson), convinced that Hockey Hero was working too completely from the KGB’s playbook to be trusted.

And finally, it looks like Mischa (Alex Ozerov), Philip’s firstborn, is getting a bit of a break. He’s at work in a dreary factory, looking every bit like what you’d expect a Cold War-era Soviet worker to look like, when his foreman pulls him off the floor because he has a visitor. It’s Philip’s brother, Pyotr (Andre Pushkin)! He’s come to meet his nephew, and winds up having him home to dinner with his wife and son, where they’re able to speak (a little) about the father/brother they’ve lost to his heroism abroad.

Theory: Am I the only one who thinks maybe the soviet PC Henry’s being raised by, and/or the girlfriend whose parents are helping pull Henry away from the family, have recruited him to a life of espionage? (Or is he just a gawky teenager whose character is being disposed of offscreen?)