How can the end of the penultimate season of The Americans already be in sight?!? Tonight’s episode, “Dyatkovo,” is the 11th of only 13, which means (sob): TWO LEFT.

As far as I can tell, The Americans only has the budget for one kid, which is probably why Henry (Keidrich Sellati) and Paige (Holly Taylor) rarely appear together onscreen, let alone in the same episode. That’s the best explanation I have for how this works, anyway. Because of it, Henry gets the full quota of kid screen time tonight, and Paige only appears in the “previously on…” part at the beginning.

Henry’s moments are not all that interesting in themselves, but they suggest something interesting might be afoot. He opens the show by talking to Philip (Matthew Rhys) about the boarding school he wants to go off to, then shows up again (I know!) later, getting a VIP tour of the FBI’s headquarters from Stan (Noah Emmerich). He meets Agent Aderholt (Brandon J. Dirden) and sees the mail robot and “the vault,” the soundproofed room where they go to tell secrets. Henry gains more access to the FBI in one afternoon than Philip and Elizabeth (Keri Russell) have managed in five years.

Henry says, and I believe, that he’s writing a school paper about the FBI. He even reads some of it aloud to Stan, and then gushes about how great Stan’s job is. A careworn Stan rebuffs his enthusiasm by talking about how he isn’t allowed to trust anyone because of his job– even Henry, the greatest kid in the world.

There is nothing concrete to suggest that Henry is actually the most adept spy on the show, but if he were, tonight he would just have been showing off. Especially when he comes home from his FBI tour and bubbles to his parents about all the cool stuff he saw, while they carefully mask their feelings. (Probably jealousy.)

In any event, they’ve signed off on his going to boarding school if he gets in, just before he’s finally proven he might be useful. We’ll see…

Although we see Philip chilling with Tuan (Ivan Mok) at the Eckerts’ house (while having a post-Henry chat flashback to playing “airplane” with his own dad in Russia), most of the Jennings’ spy activities in this episode center on a new player. In a meeting with Claudia (Margo Martindale), they’re told that the Center has identified a woman they believe to be a war criminal who worked with the Nazis in WWII to kill her fellow Russians by the hundreds and dump them into mass graves. Philip and Elizabeth are tasked first with finding out everything they can about her (to confirm her identity), then to “go forward.”

Philip is extremely hesitant to carry out another hit after the snafu in Oklahoma, and he reminds Elizabeth that they talked about not acting in haste again. She reassures him that they won’t take any action without knowing for sure that they have the right woman.

The woman, Natalie Granholm (Irina Dubova), is a semiretired nurse who volunteers at a free clinic and is a loving wife, mother and grandmother in Massachusetts. Her records show that she was in a hospital in Germany after the war, where she met and married an American soldier. She’s been living in the United States since the 1950s, and Claudia is not impressed by anything she’s done in the nice life she’s made for herself since being a mass-murderer. 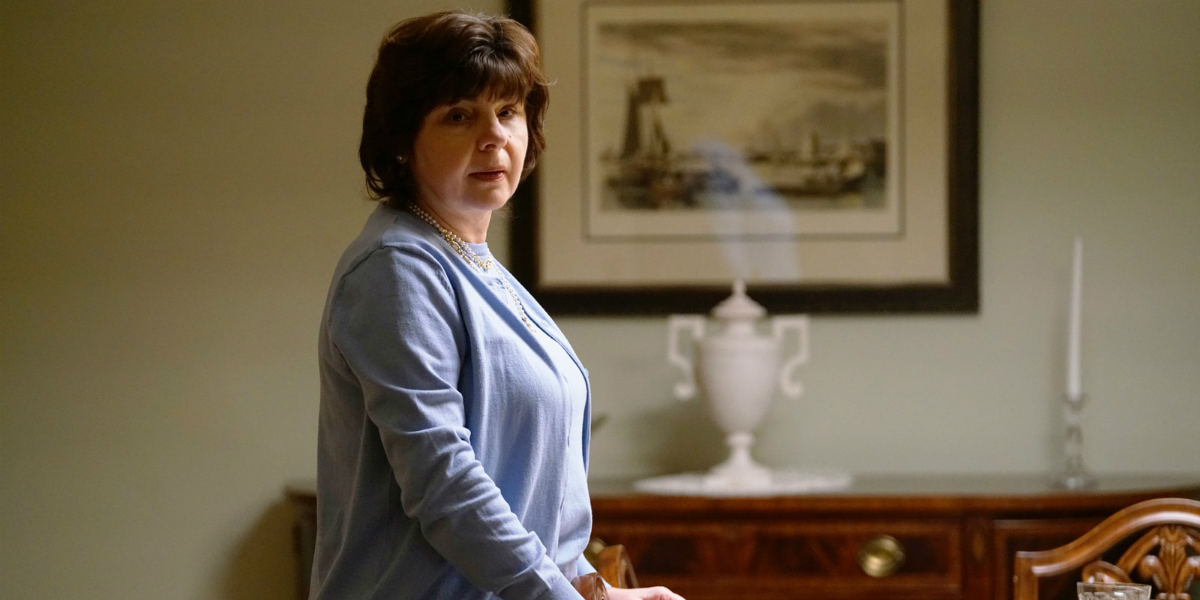 Philip and Elizabeth don some new disguises. In addition to wigs, he has a goatee and she has a somewhat distracting scar by her eye. They begin surveilling Natalie, trying to get a photo of her that they can compare with the only known, 40-year-old photo they have of the woman they believe her to be. Because she is 40 years older, somewhat heavier and in color, this isn’t easy, but the Jennings give the photos they manage to get to the Center and await a decision.

When the results come in, tension mounts. The Center is sure this is the woman they’re after, and they instruct Philip and Elizabeth to go ahead. They wait until Natalie is home alone, then sneak into her house with silenced gun drawn and corner her while she’s setting the dinner table.

Natalie thinks they’re robbers until Elizabeth accuses her of being the woman they’re looking for and lists her crimes. Natalie, nearly hysterical, begs them to believe that she isn’t that woman, and also begs to know who they are. Elizabeth leans in and whispers in a chillingly sinister way, “We’re them.”

I kept waiting for someone to think to ask for Natalie’s wedding photo so they could compare the old photo they had with one of equal vintage, but they decided to go with interrogation instead. They tell her they’re waiting for her husband, which leads to her frantically confessing, pleading with them to kill her before he gets home and to spare him.

By the time Mr. Granholm walks in on the hostage scene in his dining room, Natalie is ready to confess in full. Unfortunately for our conflicted heroes, what she confesses to isn’t as black and white as having been a Nazi collaborator.

She explains that the Nazis rounded up everyone in her village, including her family, and shot them all– except her. Then they made her dig the pit that they dumped all of the bodies into, and then they just kept her. She insists that there was no reason she was spared, that nothing made any sense. Then she forces out the darkest part: that the first time the Nazis made her shoot Russian prisoners, they got her so drunk she could hardly stand. When the war ended, she wanted to disappear into a new identity, to be the good woman her husband believed her to be. She’s in tears as she apologizes over and over.

Her husband assures her that he knows who she is, and that she is good, but it’s too late. Philip and Elizabeth have been sent to kill a war criminal, and they’ve found her, whether or not there were extenuating circumstances.

But Philip hesitates. He has the gun pointing at her, but he doesn’t pull the trigger. You can see that the unexpected curveball of Nazi entrapment has weakened his already weak will to kill. Elizabeth still has her resolve, though, and she executes both of the Granholms efficiently, with one clean shot to the forehead for first the Mr., then the Mrs.

In the car afterwards, they drive the long, dark miles home in silence. Philip appears to be in a state of shock. When Elizabeth finally speaks, it’s to say that she wants to leave– that they should just go. This sends Philip into a different kind of shock, and he looks over at her with incredulity. She says that she means it, and then she says she thinks they should go home. (!)

Also happening in this episode:

Stan and Agent Aderholt are still working Sofia (Darya Ekamasova), and she still has that Hockey Hero boyfriend.

In Moscow, Oleg (Costa Ronin) and Ruslan (Ravil Isyanov) find the “smoking gun,” which in this case is a meticulous ledger kept in an unlocked desk drawer, and are able to bring in the woman they’ve been surveilling about corruption in the nation’s food supply. They interrogate her, and she’s fairly matter-of-fact about what she’s been doing for her boss. She tells them that the whole country runs on corruption, and the KGB’s holier-than-thou attitude towards it stems from the fact that none of them have to worry about the same things everyone else does. 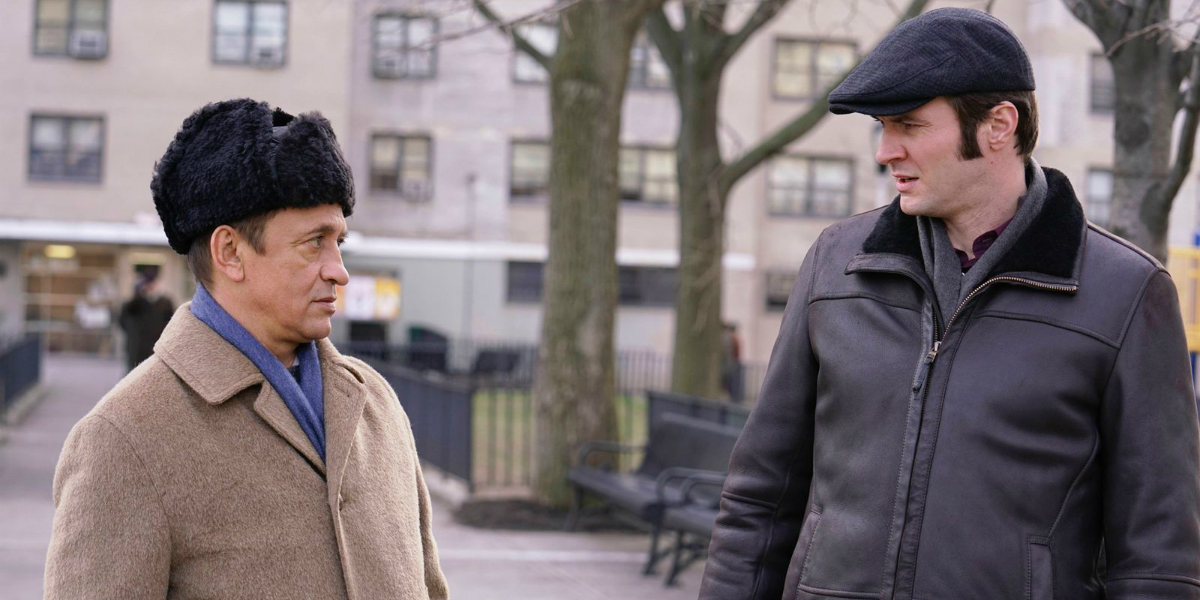 Oleg’s face in the interrogation room mirrors Stan’s, when he’s explaining to Henry that he isn’t allowed to trust anyone, and Philip’s, when he hears he has to kill a nurse/grandmother. Spycraft, man. It isn’t for the sensitive.

Observation: The combination of seeing the mail robot and having the Jennings kill a kindly old woman really evoked episode nine in season three, “Do Mail Robots Dream of Electric Sheep?”. I don’t think that’s an accident.