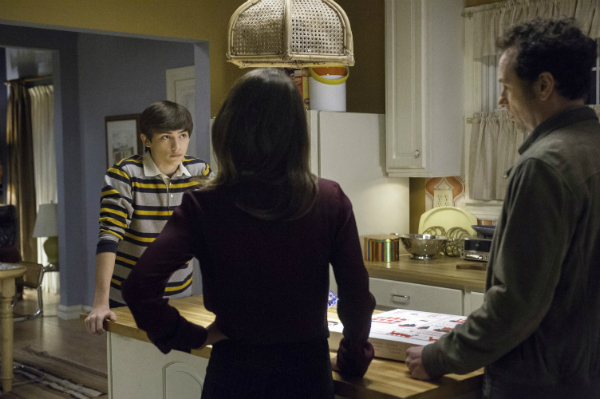 The end of season five of The Americans is in sight, but what that end will be is still a mystery. Episode nine, IHOP, covered a lot of ground and pulled in some new people and some people we haven’t seen for a while. And, maybe most importantly, it flipped the script on which Jennings kid made the final cut.

Let’s start with the most shocking moment: Henry (Keidrich Sellati) spoke! I’m guessing that there’s been a long debate in The Americans‘ writers’ room about what they should do with Henry. It must not be Keidrich Sellati’s fault that they don’t know what to do with him. If it were, they would have Bobby Drapered him and recast him with an actor they were more interested in. Whatever the reason, someone seems to have thrown out “write him off the show without killing him” because his big scene– with more lines than he’s had in the rest of this season combined– is him surprising his mom and dad with the fact that he wants to go to boarding school in another state on a scholarship, and that he’s already applied.

With Henry getting a block of lines and a veritable who’s-who of other people you almost forgot about, there just wasn’t room for Paige (Holly Taylor) in this episode. Nobody even asked where she was! (Although her mom does think she’s gotten over Matthew.)

Other things we did not see in IHOP: the Kansans, Renee (who is DEFINITELY a spy) and Claudia (Margo Martindale).

You know who we *did* see, though? MARTHA!

Poor Martha (Alison Wright) is making the world’s saddest baked potato in her dumpy, sad apartment in Moscow when someone knocks at the door. She calls out in Russian to see who it is, and when nobody answers she goes to open it and finds: Gabriel (Frank Langella)!

Instead of saying straight out that he’s visiting her because he’s lonely and they have the unusual freedom of being able to speak openly with each other about what they experienced in the U.S., he asks how her Russian lessons are going, inquires about whether or not the KGB has set her up with a nice guy yet and assures her that when her Russian is better they’ll get her a nice job in translation. Then he weakly tells her that Clark is thinking about her and totally wanted to send her a letter, but it isn’t allowed. Then, like a fool, he says that everyone wants what’s in Martha’s best interests.

Martha’s face may be the as dull as her slum’s walls, but her wits aren’t. She brushes off Gabriel’s Clark talk with a pointed look that says, “Bi***, please.” She tells him that she understands everything now, then asks him to leave and never come back. SNAP.

Also unfolding in the USSR: Oleg (Costa Ronin) isn’t done being hassled by the KGB. This time, they show up at his office and request that he immediately come to headquarters for a meeting. He complies and quickly finds himself in an office with the same KGB agent who searched his bedroom. He and his flunky give Oleg 48 hours to come up with a list of every foreigner he had contact with while living in the U.S.– even if it’s just first names of people he met in bars. Oleg knows what they’re really after, though, so he helps shortcut their process by laying out that he knew Stan Beeman (Noah Emmerich) and was trying to develop him as a contact.

From the looks on his interrogators’ faces, he hits the jackpot with this leap. They want to know more about the operation with Nina, and in addition to filling them in about that, Oleg shortcuts again by admitting that he and Nina were involved with each other. They ask if he was mad about how she was treated, and he says that he’s still mad. They ask if he’s mad enough to do something about it, and he replies with an air of hopelessness, “What could I do?”

This experience seems to lead Oleg to two active steps: he talks to his dad about knowing that his mom was in a camp, and he revisits the grocer he and his partner have on ice to pressure him into giving up a name.

At home, Oleg interrupts his mom (Snezhana Chernova) and dad (Boris Lee Krutonog) as they argue about something happening at Mr. Burov’s office. When Mrs. Burova leaves the room with a headache, Oleg chastises his dad for being hard on her and then reveals that he knows she was in a camp for five years. Oleg’s dad plays a range of emotions as he explains how distraught he was when she left, how changed she was when she returned and (implied) that he knows what she did to survive. He says they never told Oleg because they wanted him to have the life he does.

Later, Oleg heads to jail, where the big surprise is that he’s apparently surrendered his squeamishness about leveraging the grocer’s deployed son to get information. The man keeps insisting that Oleg doesn’t understand how powerful the men he’s going after are, so Oleg spins a yarn about how his brother was in Afghanistan and now he’s just a photo on the wall. He tells the grocer not to let his son become a photo on the wall and asserts that the KGB is stronger than he’s giving it credit for. The man cracks, and Oleg walks with a name.

In the U.S., old friends are emerging from the woodwork. Philip (Matthew Rhys) is back at Kimmy’s (Julia Garner) house to swap out the recorder in her dad’s (Frank Deal) briefcase and celebrate Kimmy’s 17th birthday. He’s apparently been keeping up this connection with intimate conversation and prayer as the bonds that keep her on the hook in lieu of sex. It’s a good thing, too, because when he gets home with the most recent tape of dad’s (mostly excruciatingly boring) work conversations, he finds evidence that the Russians haven’t been idle with the virus Philip and Elizabeth (Keri Russell) retrieved from William’s body.

A bunch of soldiers tin Bosnia have died of a hemorrhagic fever uncannily like the one that killed William. If Russia really did deploy this biological weapon after convincing Philip and Elizabeth that they only wanted it as a protection against the Americans, that might make a big dent in the Jennings’ loyalty to the cause. 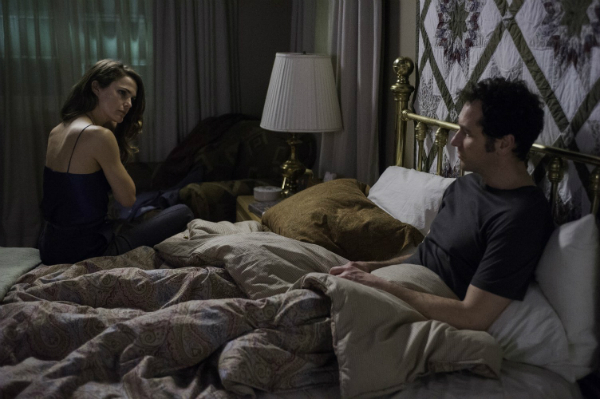 Unfortunately, Philip and Elizabeth don’t get a ton of time to talk about what this means because Tuan (Ivan Mok) is being super sketchy, and they start surveilling him to find out why he wasn’t at the Eckerts’ house all night when Elizabeth came to stay (inspired by his urging them to be there more). Her instincts tell her something isn’t right, so they put their helpers on his tail and wind up joining in on chasing him to Harrisburg, PA, and back. Once back at their fake house, they clobber him in the kitchen and Philip pins him against the wall while Elizabeth pulls a gun on him and they demand answers. He says he just leaves town to call his Seattle family because his brother in that family has leukemia and is in bad shape. Either he’s lying, which is bad, or he’s more human towards Americans than he’s let on so far.

Further taxing Philip’s time: the operator calls and sets a meeting with one of “Gabriel’s people.” Philip is summoned to a hospital to meet with a priest (Konstantin Lavysh) who passes him cryptic information (which sounds like it relates to a safety threat for Philip and Elizabeth from within the church??). He apologizes for not using the communications equipment Gabriel left him, but he doesn’t know how. He asks if he can arrange meetings like this whenever he has something to share, and Philip says that he just can’t. (He already has a real family, a fake teenage girlfriend across town, a fake Vietnamese son who might be a mole and a fake mistress in Kansas, for crying out loud!)

Over in Stan’s world, Agent Wolfe (Peter Jacobson) is putting on the pressure for him to reconsider letting them lean on Oleg now that they can see clearly that three KGB agents were traveling in the same vicinity as Agent Gaad at the time he was killed. Wolfe thinks Oleg might be able to help them identify Gaad’s killers, but Stan still doesn’t want to put Oleg in the crosshairs.

To ease his conscience, he visits Agent Gaad’s widow (Christine Toy Johnson). She tells him that nobody from the FBI has visited her since Gaad’s funeral. This makes it a bit awkward when Stan confesses that he didn’t just come to visit. He tells her vaguely about how he knows someone who might be able to help get revenge against Gaad’s killers, but that the guy doesn’t deserve to be used this way and he knows Gaad wouldn’t have wanted something as petty as revenge. The widow Gaad gives him a cutting look and says without hesitation that Gaad would want revenge.