THE AMERICANS Recap: (S05E07) The Committee on Human Rights 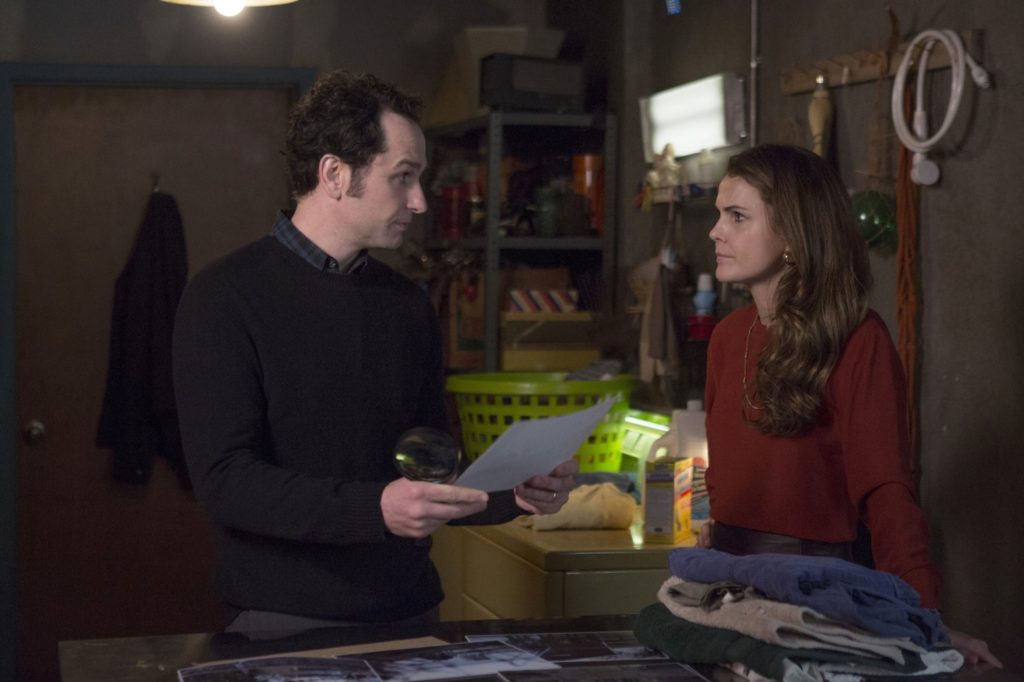 How can we already be in the last half of this season of The Americans??? The seventh episode (of only 13!), The Committee on Human Rights, was directed by Matthew Rhys, and it was kind of… bleak? Sad? Slow? I don’t know… The show that most consistently has me on the edge of my seat had me sort of… waiting for something to happen tonight instead.

We didn’t visit the Morozovs or Tuan, and only Philip had to sleep with his Kansan quarry. Most of the episode took place closer to home, save a husband-wife wig-play trip to Mississippi and Tennessee to follow Benjamin (Brett Tucker) to the super-wheat (and beyond).

Henry wasn’t home, but nobody asked where he was because he is basically the vestigial tail of the show.

Picking up where the previous episode left off, we open with Paige (Holly Taylor) and her parents having tea with Gabriel (Frank Langella). Paige seems to like him, and her parents tell her he’s known about her all her life and even gave her the stuffed tiger she loved as a child. How this inequity in their knowledge of each other affects Paige is not entirely clear.

Not long after the tea party, Paige is at home reading when her parents come in to chat with her about Gabriel and how much they’ll miss him when he goes. As they talk, we’re reminded that Paige is still operating under the false impression that America is corrupting Russia’s food supply. The look Philip and Elizabeth (Keri Russell) exchange during this moment suggests that maybe they’d forgotten that this misunderstanding was the foundation of Paige becoming more open to their work– or maybe it’s an acknowledgement to each other that they’ve been deliberately deceiving her for the sake of continuing her progress in their direction.

In any case, the conflict growing within Paige about where her loyalties lie is becoming more overwhelming. She meets with Pastor Tim (Kelly AuCoin), apparently to schedule more babysitting, and he sees that she’s in some kind of distress and asks after her well-being. She assures him that everything is going OK, and he asks if she’s been praying (sometimes) and tells her that her growing interest in self-sacrifice is, essentially, Christ-like. (We know she’s hearing him and realizing it’s also Marx-like, so who knows if that will lead to a reconciliation of her conflicting options or an intensifying struggle.)

Whatever Pastor Tim’s intention, the immediate result of his conversation with Paige is that she goes to Matthew’s (Danny Flaherty) and breaks up with him. He is a sullen wig baby person, and she says that all they do is make out, which is icky to think about. He offers that they can stop making out, but she says she can’t be with him because she has too much going on. (Church, reading… um…?) He reaches out and grabs her wrist, and she shoves him away and yells for him to let go of her, which makes her seem kind of crazy in the moment because he doesn’t know anything about her self-defense training. As Paige tells him, he doesn’t know her at all.

Her parents, while definitely relieved that the relationship with Matthew is over, are kind to Paige. Philip reassures her, I guess, by telling her that she’s still a beautiful girl and she’ll get used to these things. (Breakups? Carrying a million secrets? All of the above?)

Over in super-wheat land, Philip has a sleep-over date with Deirdre (Clea Lewis) for the sake of stealing some spreadsheets from her. When he gets home with them, Elizabeth mentions that Benjamin said he was going to Mississippi on business. Philip is sure he’s seen Mississippi on the spreadsheets, and you know what that means: WIG ROAD TRIP!

Benjamin leads the be-wigged Jenningses right to a field of wheat in Mississippi, then to a street teeming with nightlife in Memphis. (Geography lesson: Memphis, TN, is very near the TN / MS state border! Additional geography lesson: Tennessee and Mississippi share a border! The more you know, right?)

In Memphis, Benjamin waits outside a bar, where eventually a blonde woman emerges from a taxi and they greet each other with smooching! Elizabeth and Philip see the whole thing, and this knocks a little ding in their recently revised perception of Benjamin as a good guy. (If he’ll conceal truth about his dating habits, will he also conceal truth about his work?)

They take advantage of his date to return to the wheat field and steal some plants. While digging up samples, Philip assures Elizabeth that it’s OK to care, and she retorts that for her it isn’t.

Elizabeth also executes her mission to steal files from the psychiatrist in this episode, and the one she’s after is labeled “The Committee on Human Rights.” It contains a list of names of Russians, and when Philip asks Gabriel about it, he tells him they’re people who were part of a “well-organized opposition to the party at home.” Hmm.

On the Gabriel front, Elizabeth spends some time alone with him and asks him point-blank why he’s leaving. He tells her that “it adds up,” meaning the impact of their work over the long haul. Philip also comes to see Gabriel alone just before he departs and asks what the “terrible things” are that he’d alluded to having done in the past– presumably because Philip’s conscience is still troubling him about killing the innocent lab worker. Gabriel shares a little about what it was like for their side before and after the war in Russia and how he had been scared and had killed people– some of whom didn’t deserve it. Before Gabriel makes his final exit, he turns to Philip and stuns him with the statement that Philip was right and that they should keep Paige out of all of this.

Elsewhere, Stan (Noah Emmerich) and Agent Aderholt (Brandon J. Dirden) are making headway with their prospective informant, assuring her that they can make no assurances about her safety or that of her son, but that they can offer her financial assistance if she’ll start passing information to them. She’s gonna have to think it over, which is clear when she abruptly walks away from them. 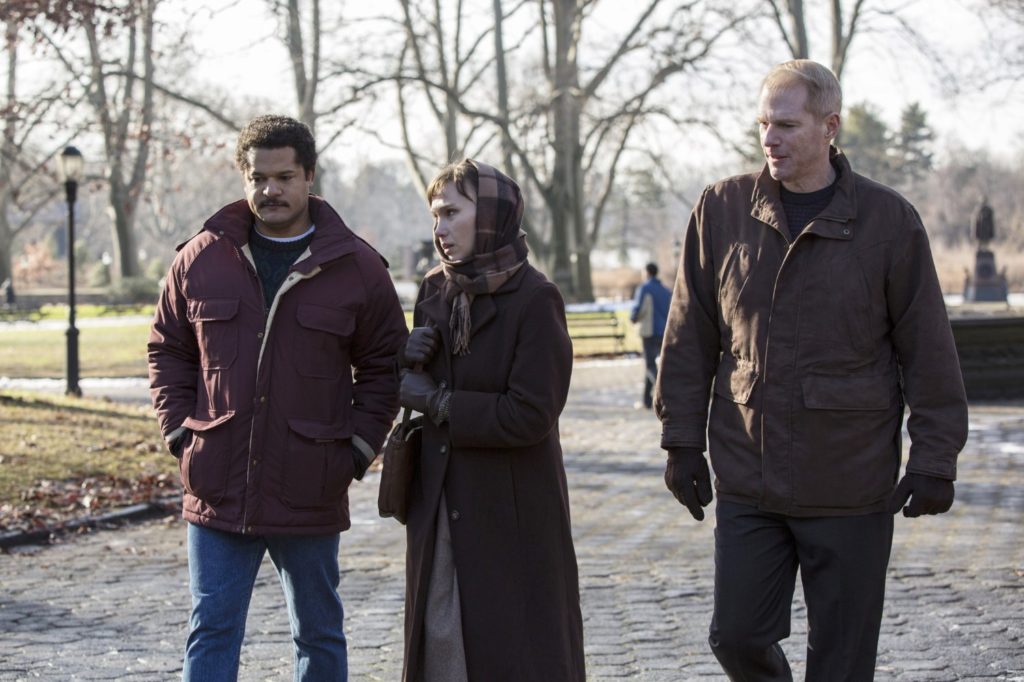 Back at the office, their boss pulls Stan into the room of silence to tell him that the Deputy Attorney General (Cotter Smith) wants Stan transferred out of counter-intelligence, but that the CIA has backed off of Oleg (Costa Ronin). Stan’s boss has saved Stan from the transfer for the time being by asserting that he’s involved in an active operation, but there are no guarantees about what happens when it’s over.

Later, on a date with Renee (Laurie Holden), who is DEFINITELY a spy for somebody, Stan is too spacey to notice she’s talking about her college skinny dipping adventures while they watch Breaking Away on TV. She gently presses him to talk to her about what’s on his mind, and after a moment’s hesitation he gives her an ultra-vague explanation of what happened at work, then thanks her for letting him unburden himself. (Did I mention that Philip asks Gabriel if Renee was sent by the Russians and Gabriel says that if she was, nobody told him because they knew Philip would ask that question? That happened.)

Meanwhile in Russia, Oleg confides in his mom that the guys who were after him aren’t anymore, but he doesn’t know why. She insists that the why doesn’t matter, and he tells her he wishes he could talk to his late brother just one more time. Then he heads to a records library to read the file on why his mother served time in a camp…

In conclusion, this was one of those episodes that connects dots, but it probably isn’t going to be the one that wins all the Emmys.