THE AMERICANS Recap: (S05E03) The Midges 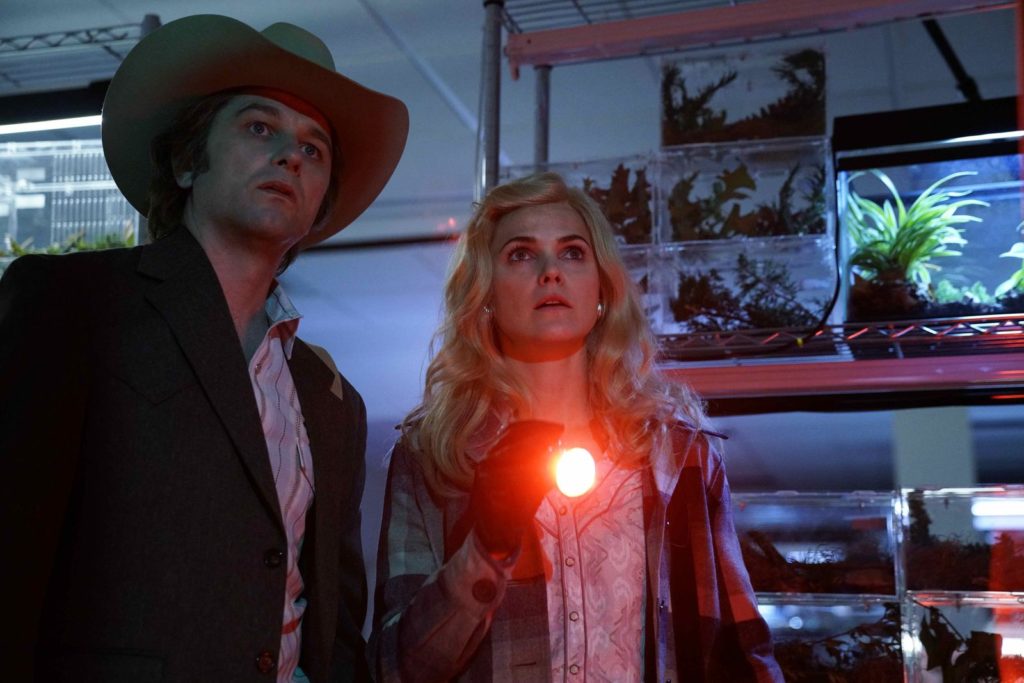 The Midges, tonight’s episode of The Americans, opens in a bowling alley with Roxy Music’s “More Than This” playing almost indistinguishably in the background. It’s more than just a genius move for creating atmosphere. In this world, there’s always more than whatever appears to be happening.

We started again with Elizabeth (Keri Russell) and Philip (Matthew Rhys) in disguise as their latest alter-egos, the Eckerts, bowling with pretend son Tuan (Ivan Mok) and the unwitting Morozov family. The Morozovs are true to form, fitting in poorly in an extremely American setting as Pasha (Zack Gafin) has an attitude that matches his bowling skills (terrible) and his parents argue in Russian. Every time they do this, Elizabeth and Philip adopt their “we don’t know what you’re saying” faces, and during this brouhaha, they intuit that Mrs. Morozov (Irina Dvorovenko) and Pasha were surprised by their defection.

In an effort to smooth things over with his new friends after his wife leaves to find out where Pasha and Tuan have disappeared to during the fight, Alexei (Alexander Sokovikov) explains that his upbringing in the USSR differed from his wife’s and his son’s. His father was taken from their home in the night, and his family found out later that he’d been put on a prison farm. Alexei and his mother traveled nine hours by train to visit him, only to be turned away. HIs father died 15 years later, and he never saw him again. Suddenly, some of the conflict Philip had lost to the idea of the USA messing with Russia’s crops returns…

In the car after bowling, Tuan is typically creepy with his frank assessment of Alexei’s being a traitor who deserves to die. Once they’ve dropped the little charmer at “home,” we finally get to see where Elizabeth and Philip change out of their disguises– something I’ve been wondering about.

They go to a cluttered storage unit-looking place and change, and while Elizabeth is reflecting on what Tuan has said and finding him totally sensible, Philip’s thoughts have shifted to Paige. He asks if she’s said anything about Matthew Beeman, and then he suggests that they tell her a little about their current mission, playing to her humanitarian streak to become closer to her while nurturing her sympathy for their cause.

When they get home, Henry is (SHOCKINGLY) not there. This time, they don’t even try to explain his absence. It is nighttime and he is not home because he is a leftover from the original premise for the series, and now they don’t know what to do with him. (Or he’s a time bomb. Whatever.)

Finding Paige (Holly Taylor) alone watching a re-run of M.A.S.H., they turn off the TV and give her a very small taste of what they’re working on. They sit down and tell her that the US government is tampering with Russian crops, and that they are working to stop it in order to save people from suffering. Then they get up and walk to the kitchen, and Paige takes the bait. She follows them, and she asks a few questions about what they’re doing and how. They tell her they’re pretending to befriend a Russian defector who is helping the US, and that they’re pretending to be a pilot and his stewardess wife in the process. 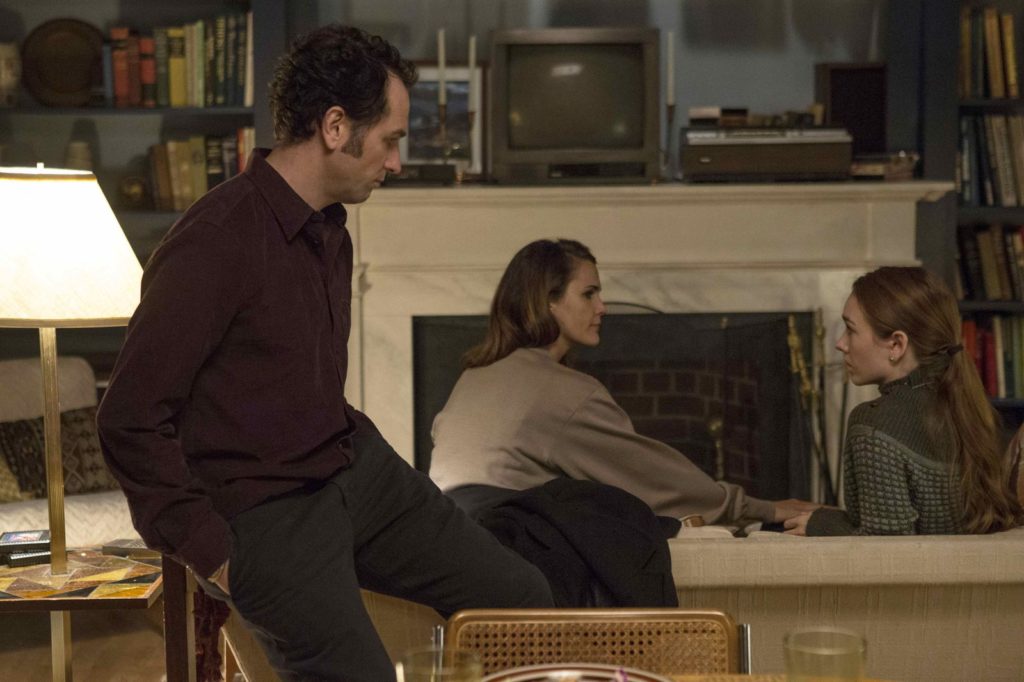 Paige, bless her heart, says, “Is it hard– pretending to be other people?”

Afterwards, Philip is getting ready for bed and has another revealing flashback to his own impoverished childhood after the war. The scene of his family in their shabby apartment was kind of confusing for me. I think his mom was taking in laundry, but the chemistry between her and her male customer made it seem like maybe more was happening. Philip and another kid were on the floor, maybe banging on broken stuff? I might have to rewatch this scene to get past its vibe and actually notice what’s happening. The point is, Alexei has awakened that part of Philip that remembers how crummy Russia could be compared to his cushy life in America.

Meanwhile, back in the USSR of 1984, poor Oleg (Costa Ronin) has begun doing the legwork for his terrible job. He is visiting the world’s most depressing grocery store, a bleak warehouse full of bleak shoppers who listlessly examine the meagre items on the shelves, bathed in a bleak bluish light. He asks for the department manager, and a pretty blonde woman presents herself and leads him into a darker warehouse, where her office is a fenced-off corner. Although he repeatedly reassures her that she needn’t be nervous, she knows he’s from the KGB and reasonably remains nervous. She has watermelons and bags of tangerines in her office, as well as other delectable foods. Oleg gently questions her about where they come from and who she pays off to get them, playing to her sense of decency in an effort to compel her to help him expose and eradicate the corruption in the system. She remains stoic and offers him a bag of tangerines as he leaves. Sadly, he refuses.

Oleg walks out of the grocery store, and the camera lingers on one bleak row where a drab woman is reading labels on the items she picks up from the shelf. For a minute, you’re like, “Is he coming back?” Then you’re like, “Is something bad about to happen?” Then, “Is that man in the background going to turn out to be CIA and follow Oleg?” You guys: it is none of those things! Suddenly, the drab woman catches your eye, and you realize: IT’S MARTHA!!! (Alison Wright)

As soon as you recognize her, the moment ends. She doesn’t reappear in the episode, but now that we know she’s within Oleg’s territory, we can hope to see her again! And she seems to understand enough Russian to read groceries, so good for Martha!

Back home, Philip and Elizabeth get the skinny from Gabriel (Frank Langella) on a bug Elizabeth retrieved (probably from her hair) on her mission to the greenhouse in the last episode, and it isn’t good. It’s a new kind of midge that can both eat a crop to death and spread a spore that can do worse. The midges come from Oklahoma, so the Jenningses will be going there to check things out.

Before they go, Paige and Matthew (Danny Flaherty) have a date. They’re at a restaurant, and he keeps asking why she’s so tense. She uses the technique mom and dad taught her last week, and is able to smoothly lie her way out from under his scrutiny. Then she finds mom in the laundry room / spycraft room at home and tells her how gross lying made her feel. Elizabeth tries to sell the idea that everyone holds things back in relationships and that the truth would only burden Matthew, but Paige doesn’t seem convinced as she storms out.

Later in Oklahoma, Philip and Elizabeth are decked out like rodeo-going locals as they case an office building. Their local colleagues are going to help them break in, and they chill out in a motel while they wait for nightfall. Philip is entering crisis mode, sitting glumly on the bed while he struggles with the seeds Alexei has planted in the midst of fighting America’s dirty dealings. He starts to share his feelings with Elizabeth, but she recognizes he’s going to his dark place and clicks into gear exactly the way she did when he was starting to melt down over needing to pull Martha out. She puts on his cowboy hat and flirts with him, drawing him out of himself and into a dance that quickly evolves into passionate kissing. 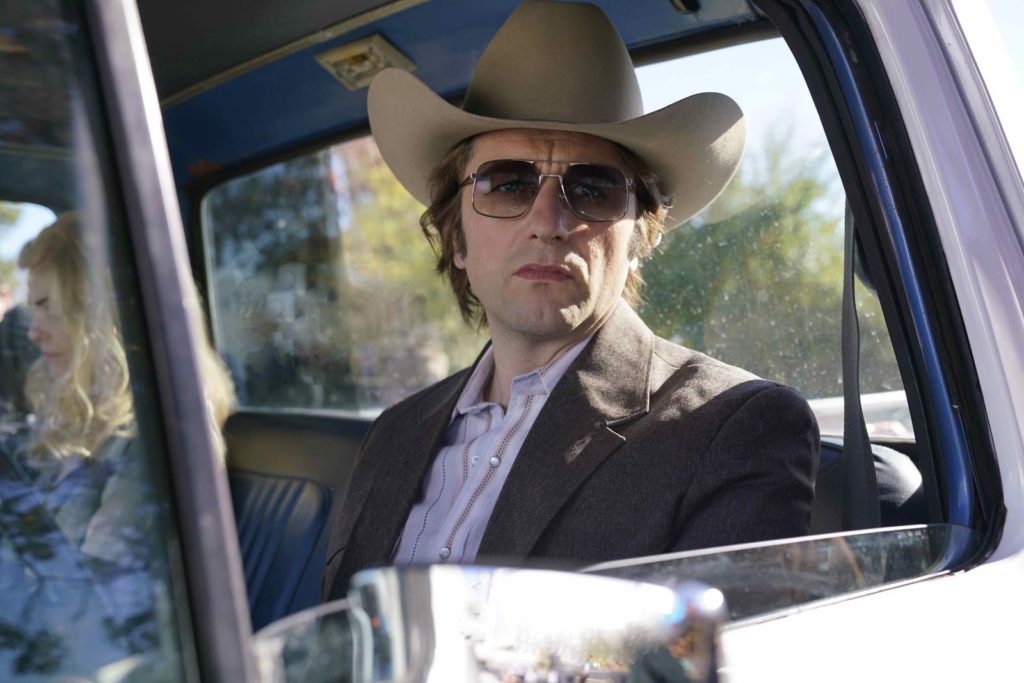 That night, they execute part one of their mission successfully, getting into the office building while two other people keep watch outside. They look at a variety of bugs in a variety of enclosures, and just as they think they’ve identified the midges, they’re interrupted by an employee coming in. Their watchers outside are able to warn them in time, so they’re hiding when the man enters, but he senses that something is off and picks up the phone as if to call for help.

Out they come! They question him briefly and intensely, learning that his lab has been hired to breed the midges and ship the eggs away. He’s already shipped tens of thousands of them, and he never asked who he was working for or what they were doing with them. Elizabeth tells him he should have asked, and pushes him to Philip, who breaks his neck. Tag-team killing! They clean up quickly and take the man out to his car, where they stow him in the trunk as “More Than This” plays again, this time front and center in the scene.

When their victim is safely stashed, Philip says, “Should we tell Paige about this?”

Also happening tonight: Mischa (Alex Ozerov) is still making his way to the USA. He is currently in Yugoslavia, attempting to connect with a man his mother directed him to for the purpose of getting over the border to Austria. (Reverse Sound of Music? Geography lesson that Austria bordered Yugoslavia!) The guy he wanted has been arrested, so an alternate guy shows up to take his money and search his bag while a menacing fellow watches. It should be fine.

Another Oleg moment: The CIA spook who asked for a meeting corners him in an alley to say that he’s missed it. Then the spook apologizes and slips something into Oleg’s pocket- a map with details for a new meeting and the tape Stan made of Oleg giving up the Russian “defector,” which leaves Oleg looking heartbroken when he hears it.

A subplot in this episode, if you can even call it that, is that Stan (Noah Emmerich) and Agent Aderholt (Brandon J. Dirden) appear to be cold-calling potential informants. They corner an Aeroflot employee at a diner, asking him to consider working with the FBI. He just walks away. Then they creep on another guy while he’s at a urinal. He is similarly unimpressed by their pitch. No explanation is given… yet.