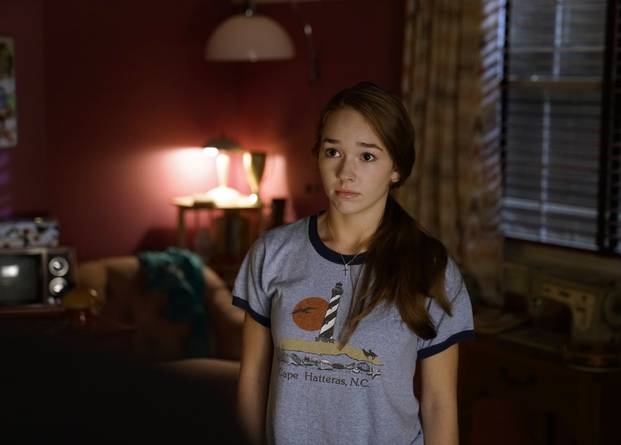 Man, if you want to be emotionally gutted by a television show, there’s no need to let something as heavy-handed as This Is Us do the job. Just watch poor Paige Jennings (Holly Taylor) try to navigate life as the daughter of Russian spies in Reagan’s America on The Americans.

I don’t even know where to start with this episode. The relationships on The Americans are heartbreaking and tense and so wonderfully acted that I want to write thank you notes to everyone in the cast. (Except Henry. The jury is out on him. Is he a time bomb, or do they leave him on the sidelines all the time because he isn’t a good actor? He wasn’t in tonight’s episode at all, and their excuses for that are starting to sound equivalent to, “You just missed him!”)

The plot of this episode is that Elizabeth (Keri Russell) and Philip (Matthew Rhys) continue to track Alexei Morozov (Alexander Sokovikov) and his involvement in the U.S.’s possible manipulation of crops destined for Russia with help from pretend son Tuan (Ivan Mok). Stan (Noah Emmerich) finds out that the CIA wants to pressure Oleg (Costa Ronin) into further helping the U.S. from within the KGB in Moscow, and Stan is pissing off people in the F.B.I.’s hierarchy by disagreeing with this. Paige is struggling to keep it together, especially in the face of her apparently growing desire for sexy times with Matthew (Danny Flaherty).

The episode opens almost immediately after last week’s ended, with Elizabeth and Philip delivering the slice of William’s (Dylan Baker) arm they secured in their grave digging mission to Gabriel (Frank Langella). In addition to handing over a super-dangerous little cooler, they have to tell him that Hans (Peter Mark Kendall) was exposed to the virus and they had to kill him. (I completely forgot to touch on this last week, but the scene when Elizabeth shoots her protege in the head and then helps Philip stuff the body into William’s coffin was intense.) However, the emotional chord in this exchange with Gabriel is struck not when they discuss the death of Hans, but when Philip says that he thinks William would have liked that they got the virus from his body, and they all silently agree about this– like it’s a tribute to their shared passion for Mother Russia. 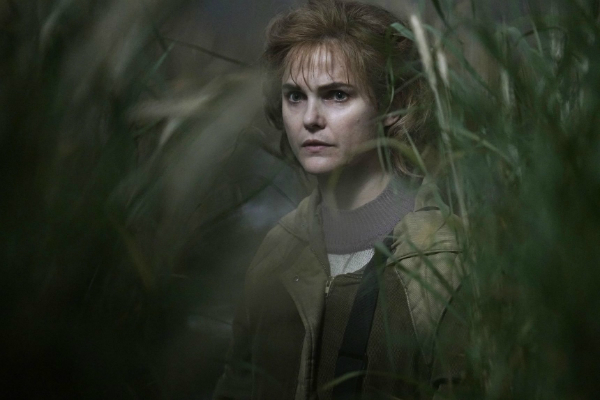 Elizabeth sneaks into the grain greenhouse of doom.

Gabriel then addresses their new gig investigating grain, and tells them The Center suspects there’s something foul afoot regarding crops exported from America and its allies to Russia. Philip says that he didn’t think the U.S. would mess with Russia’s food in a tone that suggests any illusions he had about defecting a couple of seasons ago have disappeared. Elizabeth looks blankly at him, somehow acknowledging his naivety without condemning him for it.

When they finally get home, they peek in on their sleeping children before heading to bed. Henry (who actually *is* in the episode– just sleeping with his back turned to the camera– my bad) is where he should be, but Paige’s bed is empty. Revealingly, the Jennings parents start speculating that she’s with Matthew and worrying about what she might say to him and whether they’re having sex. If they understood Paige at all, they would have looked for her hiding somewhere because her parents are God-knows-where in the middle of the night and she keeps having nightmares about watching her mom kill a mugger. Fortunately, they get an object lesson in “Paige” when she moans in her sleep and they find her hidden in her closet, sleeping on the floor. When they wake her, she half-consciously explains that she couldn’t sleep, then moves back into bed. They exchange a look I would describe as “shamed bewilderment.”

Their dynamic with Paige is so twisted by their (kind of reasonable) obsession with whether or not she will further compromise their safety by knowing their secret. They’re so obsessed that they miss a lot of the cues she sends about who she is and how she really feels about anything. This is such a gorgeous parallel for how Stan is like a human divining rod when it comes to who can and can’t be turned and who is or isn’t a spy, but he is so involved with the Jennings as friends that it’s hard to imagine him ever noticing that the million composite sketches of the Russian spies he’s been tracking for the last four years look exactly like his neighbors.

Philip and Elizabeth’s cover as Tuan’s parents keeps offering new glimpses into their wiring. After having dinner at a family-style Italian restaurant with the Morozovs, the little fake family is unpacking the evening in the car. Tuan goes on a mild rant about how privileged and spoiled kids like Pasha (Zack Gafin) (and we can infer- kids like Paige and Henry) are. Tuan’s entire family was killed by bombing in the Vietnam War, and he has obviously known hunger. There is a hardness in him leftover from his childhood that makes him ruthless in his commitment to their mission. When he’s out of their presence, Elizabeth tells Philip that she’s sick of treating Paige like a child– because even though Paige is still in high school, she would already be a woman if she’d grown up with the deprivation her parents and Tuan have known. Every time I think Tuan seems a little unhinged, Elizabeth says something that suggests he’s reminded her of herself.

Although I imagined that Elizabeth treating Paige “not like a child” would involve some super tough love, instead they come into her room for a talk when they get home from hanging with Tuan and speak to her calmly. They tell her that they know they can’t stop her from seeing Matthew (which is good, because she passed at least second base with him just hours earlier), but that she must learn a technique that will help her keep her emotions in check if she wants to do so safely. The technique is to rub her thumb and forefinger gently together while she thinks about her parents, which seems a foolproof way to mellow her out in emotionally heightened boy-girl moments. They tell her to think about them in order to remember who she is and where she’s from, and watching her try with her earnest little face… ugh. (me: grabs heart, falls over) 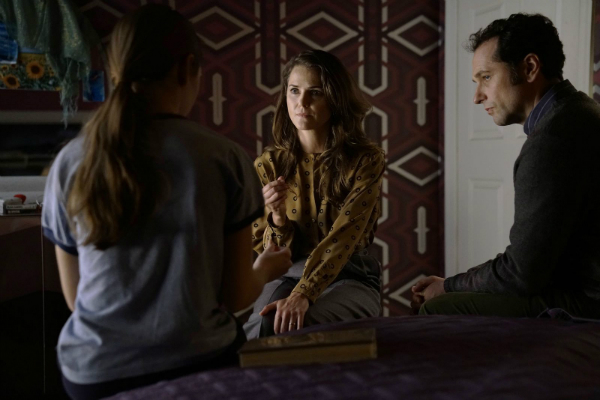 While all of this is going on chez Jennings, Stan is failing at office politics in a big way. Although the whole “who can you trust in the spy game” thing is superficially familiar, Stan demands pity in a way that makes him unique. His craggy, sad face and his old school patriotism and ethics are such beacons for hurt in his line of work. It’s his code of honor that makes him stand up for Oleg, but he seems honestly unaware of the risk to himself in defending a Russian KGB agent to his bosses and his partner. Stan’s oblivion to the spies next door makes me feel like almost anyone in his life could also be spying on him. Can he really trust his colleagues to know his heart when his ideals are out of sync with their objectives? Is Agent Aderholt (Brandon J. Dirden) really his friend? Is the pretty blonde from the gym (Laurie Holden) what she appears to be? We know that Stan was undercover for a long time with white supremacists before coming to the Jennings’s neighborhood. We know he’s a tough guy. But he strikes me as such a vulnerable, babe-in-the-woods type when he isn’t directly in the line of duty. 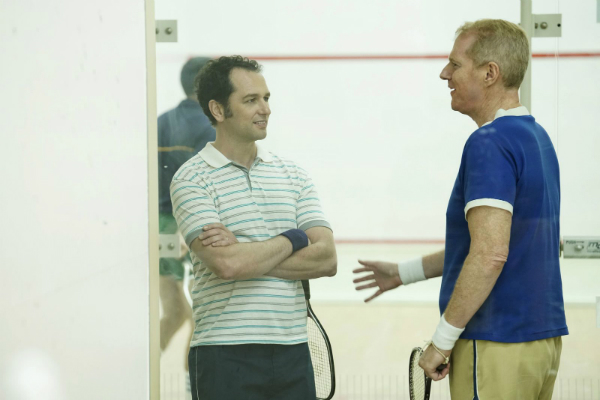 And I gave poor Oleg short shrift last week, so let’s talk about the guy who is now in the crosshairs of the CIA because he didn’t want his country to have a bioweapon. He’s the KGB equivalent of internal affairs, destined to make enemies of nearly every influential person in Moscow because of his work. His grieving mother (Snezhana Chernova) seems to wait for him by the door like a puppy while he’s at the office, desperate to give him tea when he comes home and crushed when he refuses. He is already lonely, on his way to being lonelier and now some American stranger has thrust the location for a meeting into his hand and said that Stan Beeman sent him. How has one of the savviest, most intuitive characters on the show painted himself into such a bleak corner?

Does this sound like a downer? I’m guessing you wouldn’t be reading this if you didn’t love the show. It’s like Russian literature– it might be tragic and painful, but it is always, always beautiful.

Bonus: This ad starring my friend Avi, aired repeatedly during the episode. Get it, Avi!