Laura, Laura, Laura! This week’s entry of American Gods is all about our pal Shadow’s mysteriously undead wife Laura, and what her and deal is. 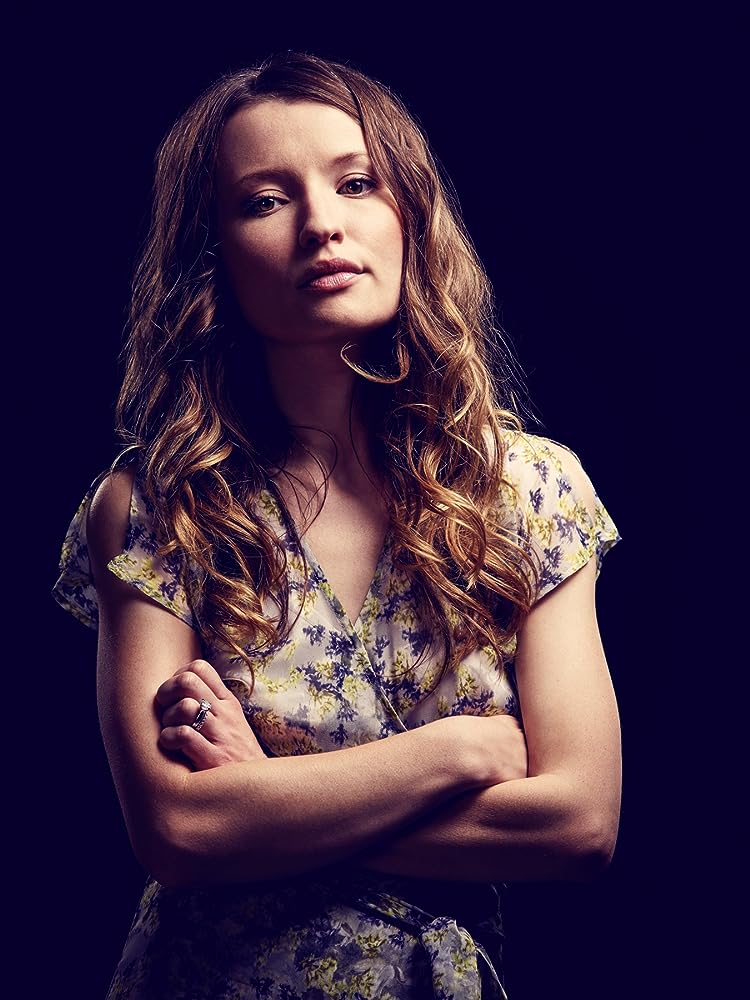 Turns out, Laura’s deal is she’s terribly unhappy and depressed. Laura works in an Egyptian themed casino as a blackjack dealer. She goes to work, goes home, tends to her cat, makes some food, and just muddles through the day. A fly buzzes through her house, and she kills it with bug spray. That’s when she gets an idea to hop in her hot tub, keep the lid on, and spray the bug spray as it mixes with the fumes, in a suicide attempt. She ends up flipping the cover off though and taking a deep breath.

Later, she’s back at the casino, where Shadow approaches her table. He tries to run a con on her with his sleight of hand skills, but she quickly points out all the security measures, and dissuades him from his thievery. He catches up with her in the parking lot, where they flirtatiously discuss her becoming his inside man at the casino. Shadow’s working the charm, and they end up going back to her place. When they arrive, they start having sex. Laura isn’t very excited by it until she starts slapping him across the face, and the love making takes a rougher turn.

The next morning, to her slight surprise, Shadow is still there, sipping coffee in her kitchen. They start chatting about their card skills and the idea of robbing the casino. We see her start to learn a few magic tricks from Shadow as their relationship develops.

A montage shows us some of their life together, with their friends Audrey and Robbie (played by Dane Cook). At one point, Laura and Shadow are lying in bed, talking about her pet cat, and that her grandma told her they can see ghosts and warn you of thieves. Shadow says the cat must be broken because he’s there. She questions him if he’s worried about going to jail if they rob the casino, and it segues into a discussion about the afterlife.

Laura doesn’t believe there is an after life, and tells him “there’s nothing to believe in.” She reveals she became disillusioned as a child, life is not that interesting, and that she wants to get the magic back. When Shadow looks concerned, she tells him not look at her like a “lost puppy,” and the nickname is born. As they’re talking, we see flashes of the wedding, where Laura doesn’t exactly look thrilled.

Another montage begins, showing Shadow starting to work at Robbie’s gym, Laura going to work, coming home to see Shadow on the couch, occasionally having sex, but looking longingly toward that hot tub. Laura isn’t happy with anything, and she decides to make a change.

The next morning, she tells Shadow she wants to rob the casino, and reveals that she’s in love with him, but unhappy. He’s hurt because he actually is happy, and doesn’t want to change the way things are, but Laura argues that they’re ignoring their history and how they should both be behaving. She tells him she has the perfect plan, and that he won’t get caught.

And yeah, of course he gets caught. We next see them in jail, where Shadow refuses to take a deal that would put him and Laura in prison, and opts for a longer sentence. He asks if she can wait for him, and she tells him she can.

But then the calls from prison start, and she starts to ignore them a little. Robbie hangs around with Audrey. One day Laura comes home, and the cat is dead. Robbie comes over and buries the cat for her. She thanks him with a hug that goes on too long, and he goes in for the kiss. He quickly apologizes, but they end up making out and heading on the road for sex. Laura still looks dispassionate about the whole thing. The next day, she tells him it won’t be happening again, but she ultimately pulls him into the house.

Look bro, you should call this off

Sometime later, we see her side of the phone call from the first episode, where Shadow says he’s worried about what’s coming. Laura tells him about the party, and as she moves through the house, we see Robbie naked on the bed, and she’s not wearing any pants. They are post-coital, and as she wraps up the phone call, she tells Robbie to get dressed.

They begin driving and she insists they have to break off the affair and that it was always temporary. Robbie tries to offer to end his relationship with Audrey, and tell her that she doesn’t love Shadow, but Laura tells him to think of the whole thing as a sweet memory. And to cap off that memory, she starts to give him a blow job while he’s driving, during which he crashes the car, killing them both.

A disembodied Laura sees the accident from above, before turning to see a darker take on the desert landscape we saw in the last episode. Anubis is there waiting for her, informing her of her death and leading her to the scales. He places the white feather on one tray and reaches to remove her heart, but she swats his hand away. He tells her he must weight her heart, but Laura already knows the outcome, and that she’s going to lose to that white feather. Then she slams down the empty side of the scale to prove her point.

Anubis walks away and Laura follows, asking where she’s going. He says she will pass through and that she believed in nothing, so she will go to nothing, and there will be darkness. Laura asks if there will be peace, and he tells her again there will be darkness. Then she sees the hot tub and the bug spray. Laura is not having any of this, and begins to argue with Anubis. He becomes angry and tells her death is not a debate and there is no where for her to go because she is already decomposing and buried. He adds that he will not be swayed from his duty, and once he is done, he will forget about her.

Laura starts to cuss him out, but she is suddenly ripped backwards and disappears, much to Anubis’s confusion.

We see Laura emerge from her grave, where she takes in her autopsy scars. There is a strange glowing light in the distance, and she decides to walks towards it as an intense rain begins to fall.

She reaches the point where the light is, and it’s the scene from the first episode where Shadow is being lynched by Technical Boy’s cop-like creatures. There is a warm light around Shadow as he struggles. So, she throws a punch which crushes the skull of the cop-like creature. Apparently, being undead gives you super human strength. She proceeds to take out the whole group and break Shadow’s noose. He doesn’t see her as he leaves the scene, as she’s hiding behind a tree, as her arm falls off.

Laura collects herself (literally) and limps through town back to her house. There, she cleans up and changes clothes. As she observes the house, she sees Shadow’s light approaching, and hides in the now empty hot tub.

At a different house, Laura attempts to sew her arm back on, when her friend Audrey enters. Understandably freaked out, she runs and hides in the bathroom, yelling at Laura to ” get out of my house you zombie whore!” Laura enters the bathroom anyway so she can take an embalming fluid fueled poo (yeah, gross), and she and Audrey talk things out. Audrey admits how hurt and angry she is and that she tried to sleep with Shadow. Laura pretty much agrees with Audrey’s feelings. They make up to the point of Audrey sewing Laura’s arm back on, even as she accuses her of never loving Shadow and being a liar. Laura says she only told one big lie, which was that she could wait for Shadow. Then she asks to borrow Audrey’s car.

Instead, Audrey is driving her towards the glowing light only Laura can see. Laura is upset about her lame obituary, but Audrey tells her it’s fitting since she didn’t have the greatest life. She asks Laura what she’s going to do once she finds Shadow. Laura replies that she’ll have her own sunshine. Audrey scoffs at Laura’s insistence that she ever loved Shadow.

As they drive, they almost run over a man and a dog stop in the middle of the road. The dog turns out to be Anubis, who says “You, I remember,” when he sees Laura. 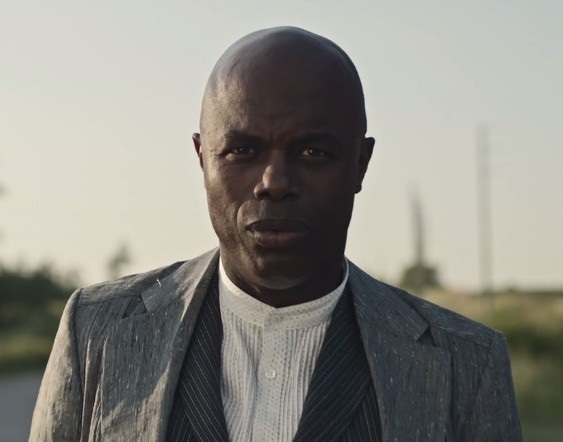 Anubis is here to collect

The man (who is actually Mr. Ibis, another Egyptian god, responsible for transitioning to the underworld) take her to a small funeral home, where they put her arm back on properly and give her a living makeover, painting her to look alive again. Anubis tells her a heavy heart is weighing her down, and she tells him she wasn’t in love then, but she is now. Love, he tells her, will always have someone at a disadvantage. Ibis tells her lots of people wish for dead lovers back, and that Shadow will thank whoever sent her back to him. Anubis tells her when she is done with her task, he will come for her and deliver her to darkness.

Laura arrives at a hotel room, where she sets up a fly paper strip, changes into a nice dress she brought from home, and waits patiently for Shadow to arrive. She sees his glow as he approaches, and he enters in a halo of warm, glowing, light. “Hi, puppy,” she says.

So, now we know Laura’s half of the story, where do things go from here? Guess they’ll tell us next time.

“Always act on your impulses ... Life's candle burns too briefly not to live in the moment.” --The Mighty Thor (All-New, All-Different Avengers Vol. 1)