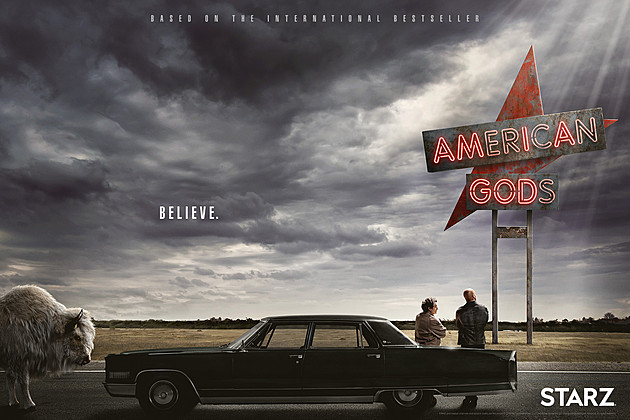 Welcome to your American Gods recap!  There’s a lot to get through, so let’s dive right on in.

**Be forewarned, aside from [SPOILERS] there will be descriptions of some graphic stuff. I’m doing my best to keep it clean, but this is not family friendly Sunday night viewing.**

American Gods opens with our first “Coming To America” sequence, set in 813, with a small band of Vikings arriving on the shores of the New World–where they are immediately nailed with arrows from unseen Native Americans. A lack of wind leaves them stranded on the beach, where they decide some sacrifices must be made to the “All Father” (aka Odin) to return home. So naturally, after carving a wooden idol of their god, they all gouge out one of their eyes with a red hot blade, but still, the wind doesn’t pick up. So the next step is a human sacrifice. When that STILL doesn’t kick any wind from Odin, they remember he is a war god. So they go to war against each other in a scene so bloody, it could put Game of Thrones to shame. But hey, the wind returns! The Vikings leave, never to speak of the horrible place they visited again. At least, until Leif Eriksen arrives over a hundred years later.

We then move on to meet Shadow Moon (Ricky Whittle), working out in the prison yard with his cellmate, Low Key Lyesmith (Jonathan Tucker) spotting him. They’re talking about gallows and gallows humor when Shadow admits he’s “not superstitious” but he feels like an axe is hanging over his head, even though he only has a few days left in prison. Later, he catches up with his wife Laura (Emily Browning) on the phone, where she assures him he’ll be fine, telling him “I love you, puppy” (her nickname for him). She tells him their friend Robbie is coming by, and they say their goodbyes.

Shadow has a dream that starts with seeing Laura lying in a bed, telling him again she loves him. Then he’s walking through a strange forest, covered with bones and skulls. He approaches a large tree in the center that begins to grab at him, as a noose falls from one of the branches. 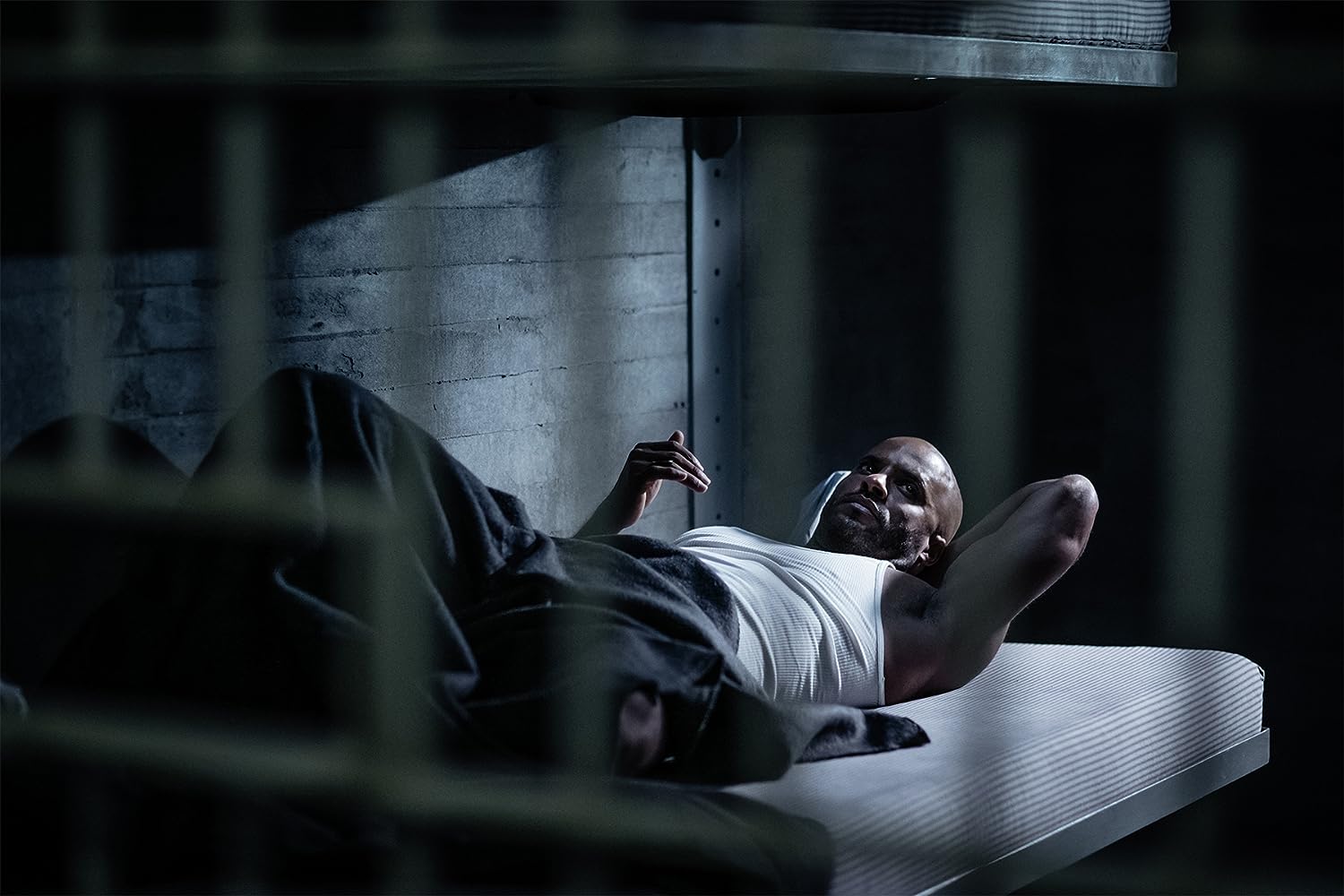 It was all just a dream Shadow (Ricky Whittle)

He’s awoken by a guard, who brings him into an office to tell him that Laura has died in a car accident and he will be released early for her funeral. He exits jail in a suit, with storm clouds gathering over head.

After being dropped off in town, Shadow is at the airport, getting the Planes, Trains, and Automobiles treatment from a clerk at the counter, as he tries to get his ticket changed to get home faster. As he’s about to argue, he flashes back to a conversation with Low Key, about how important it is to treat airport personnel well, lest he get arrested and thrown right back in jail. Shadow takes it as a lesson on behaviors that work in and out of prison. Low Key says no, just don’t piss off people at the airport. 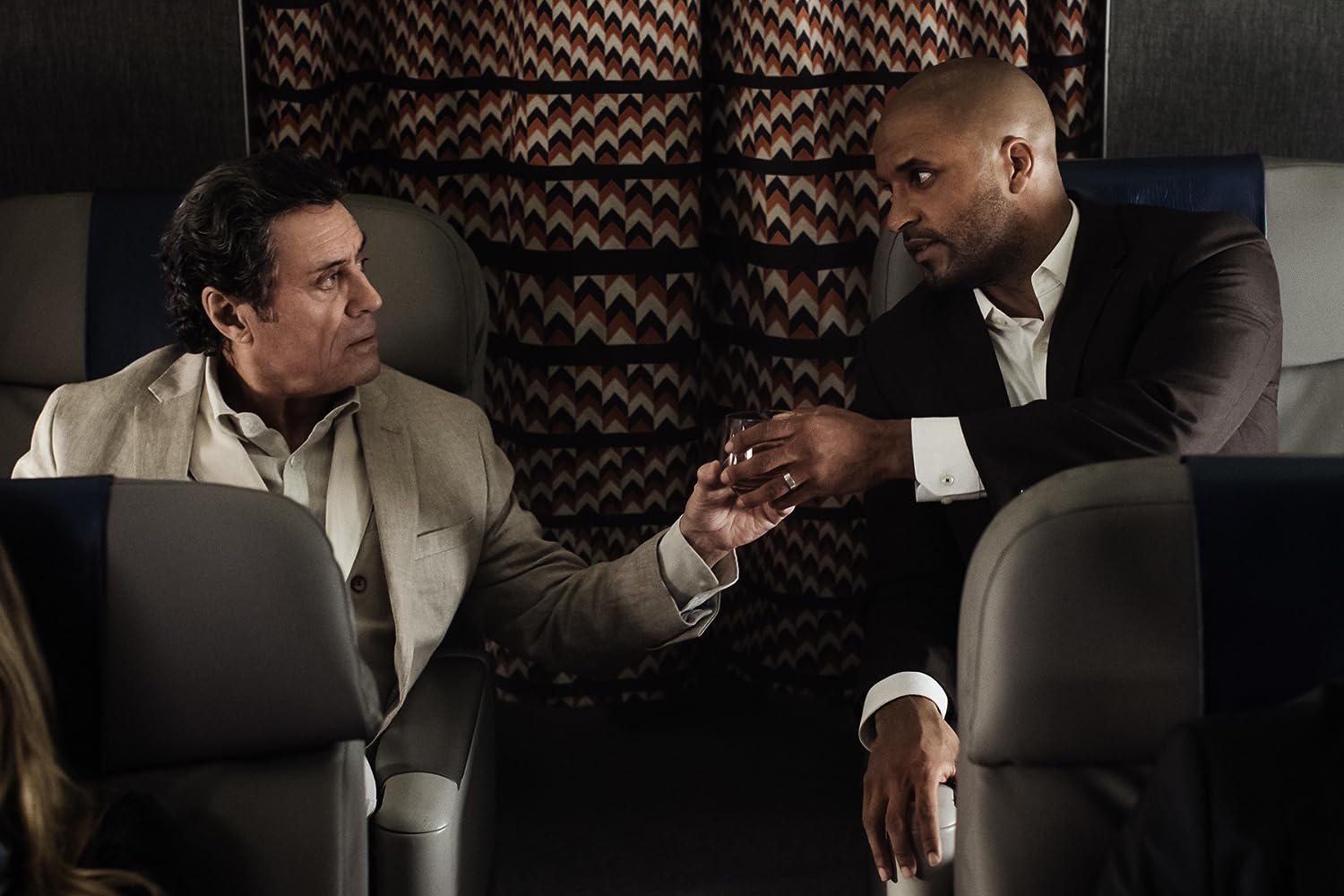 They begin chatting, Shadow complimenting Wednesday on his hustle at the counter, Wednesday admiring Shadow’s coin tricks. Wednesday notes a lot of things about Shadow, correctly guessing he’s recently out of prison and that he’s had some kind of loss. Wednesday discusses his own talents, which including usually getting what he wants, and sleeping anywhere (which would be super handy on a plane). The flight bumps along, and Wednesday poses a question to Shadow–what’s really keeping the plane in the air? The science of flight as explained by Isaac Newton, or the faith of everyone on board?

After that existential mind bender, Wednesday offers Shadow a job. Shadow declines, saying he already has one lined up with Robbie. “No you don’t,” Wednesday says quickly under his breath, before asking him one more time, and dropping off to sleep. Shadow tries to sleep as well, but has a nightmare about that creepy forest, Laura, and a white buffalo with flaming eyes telling him to “BELIEVE.”

The White Buffalo has a message for us all

He wakes up to an emergency landing, after which he decides to just drive home, but not before stopping at a national park, admiring the sights, and letting out an intense, frustrated scream.

A title card whisks us away from Shadow’s anguish to “Somewhere in America,” where a beautiful woman (Yetide Badaki) in a bar looks at her phone as a man approaches, meeting her for an online date. She takes him to her all red room, where things get FUH-REE-KAY. They begin having sex, where she asks him to worship her, call her name (Bilquis if you haven’t figured it out by now), and as they go at it, she literally grows in size, until he’s dwarfed by her, and he sinks inside her lady business. And then, she’s back to normal, admiring herself in a mirror. Guess the poor guy should have swiped left.

Bilquis (Yetide Badaki) doing what she does best

We’re then back to one of the cooler bars I’ve ever seen, with an alligator shaped bar area, as Shadow makes a pit stop on his journey home. In the bathroom, he meets Mr. Wednesday again, who picks up their conversation right where they left it on the plane, offering work, and breaking the news that not only is his wife dead, his friend Robbie is too–they were riding in the same car.

Wednesday again offers the job, based on a coin toss, calling heads as Shadow flips the coin. Shadow says he rigged the toss for tails, but Wednesday tells him it’s heads, and sure enough it is. He saunters off to get drinks to seal the deal.

Mad Sweeney (Pablo Schreiber) pops in, telling Shadow he’s a leprechaun, and warning him against becoming involved with his soon to be employer. Wednesday returns with drinks to seal the deal, and offers more information about the job (driving him around, and occasionally handling some physical things, and should he die, hold his vigil). Shadow finally agrees after detailing his terms (money, what he will and won’t do when it comes to beating people up), and drinks back three shots of mead to make it official.

Sweeney continues his coin tricks, pulling them from the air, dropping them into glasses from his palm, and even popping one out of his mouth. “How’d you do it?” asks Shadow. “With panache,” replies Sweeney. He may look like a hipster jerk, but I kind of love Sweeney’s attitude. Shadow wants to know how the tricks are done, and Sweeney offers up a fight in exchange for the information, as well as one of the gold coins he’s been pulling from the air. Shadow refuses until Sweeney insults Laura, and then a bar fight kicks off. Sweeney goads him throughout, insisting that Shadow loves the violence.

Mad Sweeney (Pablo Schreiber) wants to bring it on

Shadow awakes the next morning in Wednesday’s black Cadillac, not remembering much from the night before besides the fight and the gold coin in his hand. Wednesday drops him off for the funeral (after he cleans up a bit of course).

Inside the funeral, Shadow sees Laura in her casket, as their friend Audrey (Betty Gilpin) cruelly reveals that Laura, and Robbie (Audrey’s husband) were having an affair, and were engaging in some sexual activities when the car accident happened. She’s hurt, and uses rougher language than I will quote on this site.

Shadow stays be the graveside until well after dark, where he finally unleashes his hurt feelings to Laura, and how he wanted to be part of her history. He flips Sweeney’s gold coin, and it lands tails up on the soil topping her grave. Audrey arrives, drunk from Robbie’s funeral, with more lurid details of the affair, and how much she used to be jealous of Shadow and Laura’s relationship (saying he looked at her like a hurt “puppy”). After her rant, she offers to get closure (revenge?) against their significant others by having sex right there in the graveyard for them to see. Shadow refuses, calms her, and they hug. As they do, the gold coin sinks into the dirt on Laura’s grave.

Sometime after that, Shadow walks down a lonesome stretch of highway, as the streetlamps go dark around him. He spots a mysterious glowing box in the field beside the road. As he inspects it, it springs open and latches onto his face, taking him through some digital imagery into the limo of Technical Boy. 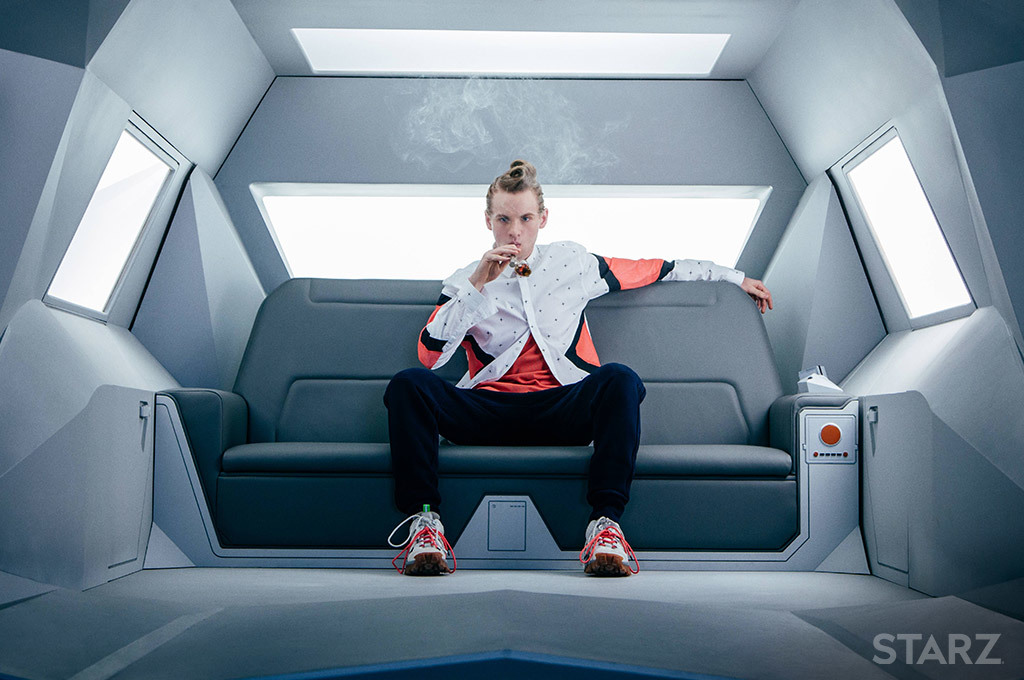 Do not mess with Technical Boy (Bruce Langley)

He interrogates Shadow, blowing smoke from his vape pen in his face, and demands to know what he’s doing for Mr. Wednesday. Digital, faceless, henchmen beat Shadow for his lack of answers, as Technical Boy (Bruce Langley) tells him Wednesday is history and should just accept it. Then he tells Shadow he won’t just kill him, he’ll delete him, and with the flick of switch, Shadow is shot from the limo’s sunroof. He lands on the ground in the pouring rain, as the faceless henchmen, who have now taken on the appearance of police officers in white bodysuits and black hats, beat him, and then hang him from a tree.

Shadow struggles against the noose as blood suddenly mixes with the rain and the rope snaps. The henchman are exploding in a gory mess, but Shadow is alive, left behind in a bloody, rainy, field.

Someone, or something, is looking out for our man Shadow.

And that’s where the episode ends. I am definitely intrigued, and hooked because I want to know more about this crazy world we’re heading for. The visuals are top notch, I think everyone has been cast superbly. It’s a nice blend of action, humor, violence, and thoughtful questions. Speaking of…

“Always act on your impulses ... Life's candle burns too briefly not to live in the moment.” --The Mighty Thor (All-New, All-Different Avengers Vol. 1)