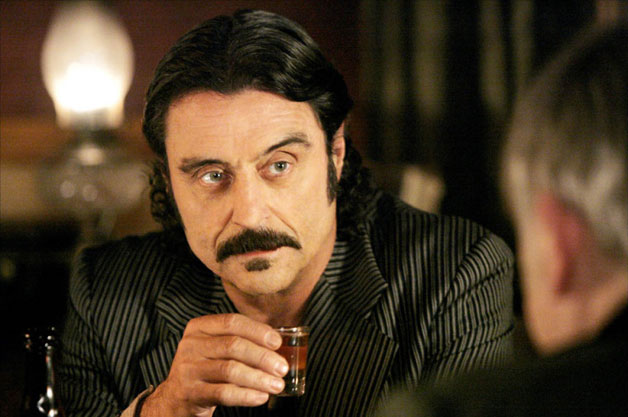 On Wednesday (of course, on a Wednesday), it was announced that acting legend Ian McShane (Deadwood, Pillars of the Earth, Kings and the upcoming season of Game of Thrones) has been cast in the iconic role of Mr. Wednesday for the Starz adaptation of Neil Gaiman’s novel, American Gods.

Everyone take a moment to rejoice. Go ahead, you deserve it. It’s frakking Ian McShane. Even showrunner Bryan Fuller was overexcited about the casting and his tweet reflects what fans are screaming everywhere:

Mr. Wednesday is powerful and charismatic — a Casanova of sorts — who is a con man and an incarnation of All-Father Odin, who’s traveling America recruiting his fellow forgotten deities to wage an epic battle  against the new American gods. A month ago the series found its lead in actor Ricky Whittle (The 100) who will be playing the story’s protagonist, Shadow Moon. Mr. Wednesday recruits ex-con Shadow as a bodyguard and Shadow is drawn into the conflict.

Author of the book, Neil Gaiman had this to say about the casting, “When you write a beloved character (beloved with, or despite, or because of all his faults) like Mr. Wednesday, you get to watch the Internet trying to cast the role, I’ve seen a hundred names suggested, but few make me grin like Ian McShane does. I’ve already been lucky enough to have him in one film (he was bright blue in it, animated, and probably Polish). Now I count myself even luckier: he’s made the journey from Lovejoy to American Gods. Yesterday was Super Tuesday. Today is Wonderful Wednesday.”

In addition to his tweet, Bryan Fuller, still overexcited,  had this to say, “Actor. Icon. And now god. It is a goddamn delight to be collaborating with the incomparable Ian McShane — again and for the first time — on a story about faith and belief, with the utmost faith and belief in Mr. McShane as our Mr. Wednesday. A wonderful Wednesday indeed.”

In American Gods, the plot posits a war brewing between old and new gods: the traditional gods of mythological roots from around the world steadily losing believers to an upstart pantheon of gods reflecting society’s modern love of money, technology, media, celebrity and drugs. Its protagonist, Shadow Moon, is an ex-con who becomes bodyguard and traveling partner to Mr. Wednesday, a conman but in reality one of the older gods, on a cross-country mission to gather his forces in preparation to battle the new deities.

American Gods begins filming in April and is set to premiere in February 2017.